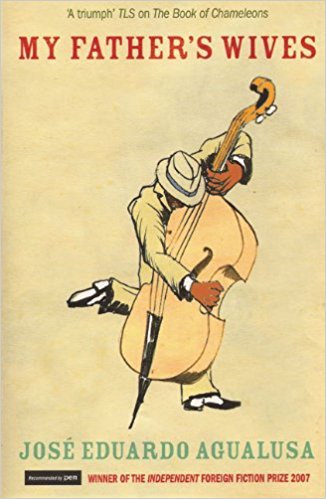 In a scene from José Eduardo Agualusa’s latest work to be translated into English, My Father’s Wives, the Mozambican writer Mia Couto makes an appearance. It is perhaps fitting that both writers should appear as themselves in Agualusa’s postmodern jaunt across southern Africa, representing as they do two astonishing contemporary voices in Portuguese-African literature.

Couto, born in 1955, is a multi-faceted writer who has produced novels, a number of children’s books, a play with Agualusa, as well as holding down a job as an environmental biologist. Often referred to as Mozambique’s most famous writer, he is an enormous literary presence in the Portuguese-speaking world and is sometimes described as ‘very African’ when people talk about his work. Perhaps such a tag comes from how he writes about the earth, the sea, the blurring of the boundaries between humans and the land they inhabit. Or his subversion of any rational opposition between life and death.

It is a topic Couto often returns to: death, or not dying, but moving off into another realm. It is the death of a mulatto in charge of an old people’s refuge situated in a former Portuguese fort that brings police inspector Izidine Naíta to this place in his classic Under the Frangipani. Here Izidne is inhabited by the soul of a man buried under a frangipani tree and goes on to be assailed nightly by hallucinatory characters form the past claiming they killed Vastome Excellency.

Like Under the Frangipani, it is death which brings Mariano from the city to the island of Luar-de-Chão in A River Called Time, the most recent Couto novel to appear in English. This time the dead man is Mariano’s own grandfather, but the family patriarch has died badly and lingers on the frontier between the living and the dead. It is Mariano who has been entrusted to take care of family affairs and who begins to receive letters from his grandfather upon returning to the island, plunging him into the complicated heart of his own family history.

Couto is not an easy writer. His characters move in and out of focus and between worlds so often it requires sustained concentration to follow his tales rationally. But the Western bedrock of reason is something Couto is likely not overly-concerned by. He may use a European language, but he writes a different reality: a strange place of exquisitely beautiful images, where modernity and tradition often collide, where the complicated scars of colonialism and post-colonialism are very much in evidence.

It is the purity of his work that really marks him out as a writer, a refusal to bow to the dictates of conventional narrative, to produce work that could be easily marketed to English speakers as clever or empty magical realism. He is a writer whose strength lies in the mystery of his world and words.

Five years younger than Couto, José Eduardo Agualusa really came to the attention of the English-reading public when he won the Independent Foreign Fiction Prize for 2007 with The Book of Chameleons. A well-deserved winner, it is a book as remarkable for the brevity and accessibility of its narrative as for the story itself. In it, a gecko lives in the house of a man who sells new pasts to people uncomfortable with their own ones, and recounts how his ‘landlord’ becomes involved with a shady client. The metaphor of a trader in pasts is one entirely appropriate to present-day Angola, a country as confused by its colonial past as it is by its current climate.

It was Angola that Agualusa also turned to in the first of his books to appear in English, Creole. Moving between Angola, Brazil and Portugal (the three countries among which the writer mainly divides his time) it is a vivid portrait of the slave trade which connected the three places in the nineteenth century. Through the voice of the Portuguese aristocrat and adventurer, Fradique Mendes, we glimpse the waning Portuguese empire and the precarious position of the mestiço bourgeoisie in Luanda. It is here Mendes falls for Ana Olímpia Vaz de Caminha; mulatta, slave-owner, a former slave herself and now free woman. What Agualusa does here so well, and again in less than two hundred pages, is vividly engage with the questions of race, nationality and identity in relation to Portugal and its former colonies, most specifically Angola.

My Father’s Wives, which appeared last summer, is a novel that ditches the more traditional narrative of Creole, and to a certain extent The Book of Chameleons. It is at least two stories in one. First there is Laurentina who was adopted at birth in Mozambique, spent much of her life in Portugal and has now come to travel across southern Africa chasing the ghost of her musician father, Faustino Manso. At the same time, though, the reader joins Agualusa and friends, on a trip that takes them from Luanda, through Namibia, South Africa and finally to Mozambique Island. They are setting out to make a documentary on music and the role of women in southern Africa and it is during this journey that the fictional characters of his novel begin to emerge.

Equally fascinating and frustrating, the narrative voice shifts from Laurentina to her companions to Agualusa himself, never allowing us to get too wrapped up in the young woman’s story. As a piece of work that deconstructs the writing process, the book is a provocative and engaging experience. As a kind of travelogue, moving through a post-colonial and post-apartheid southern Africa, we are drawn into lands peppered with surreal characters and even stranger places by a writer whose work continues to develop in unusual and intriguing ways.

Neither Mia Couto nor José Eduardo Agualusa particularly needs the attention or adoration of the English-speaking world. Both writers are doing extremely well in Portuguese, amongst other languages. It is us (and the increasingly conventional literature we produce) who can truly benefit from exposure to these fresh, brave voices—only two in an extraordinary range of writers from Portuguese-speaking Africa.

Denis Kehoe’s debut novel, Nights Beneath the Nation, was published in September 2008 by Serpent’s Tail. He lives in Dublin.

Black Horse of the Liberties