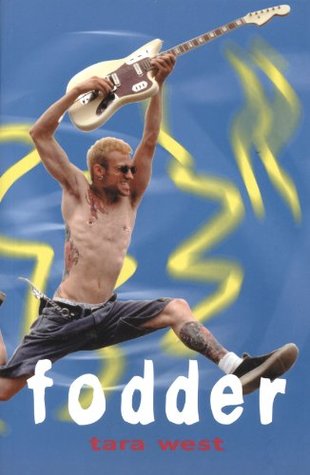 Tara West’s debut novel, Fodder, is a sort of Belfast Trainspotting with Protestants and Buckfast instead of junkies and heroin. The language is colourful, clever and a dead-on primer of the city’s street slang (‘scrote’ is my new favourite term of abuse for upstart males). Yet this fast-paced send-up of the New North and the old troubles that still beset it falters under the weight of its implausible plot and overwrought style. Indeed, the description of one of the book’s well-meaning characters might also be applied to the author: ‘Everything about her was rough and fast and heavy-handed.’

The story unfolds as a first-person narrative provided by Cookie, a 16-year-old who lives in a deteriorating and nearly deserted loyalist housing estate called Weirtown. His punk-idealist mother’s disappearance galvanises him into a three-fold quest: to try to find her, solve the mystery of his paternity and avenge himself against a Protestant hierarchy that ranges from street heavies to ostensibly respectable politicians.

Many of Cookie’s observations hit the mark, like when he talks about his brother’s band, ‘Asharra Shite,’ or his hopeless, drug-infested school: ‘Weir High. I swear to God, that’s what it was called.’ But like the clever kid Cookie’s supposed to be, his narrative voice sometimes tries too hard. For instance, at one point he says of a trendy restaurant: ‘The bench seating was so low it seemed purposely designed to test the effectiveness of Windeze.’ The problem isn’t just with the narrator’s hit-and-miss humour; it’s also with his authenticity: not all of West’s descriptions and opinions fit comfortably in the mouth of a teenager, even a smart and world-weary one.

Still, the author’s satiric bent sometimes suits her subject matter admirably, as when she has Cookie lampoon recent ‘progress’ in Belfast:

Imagine it. Young line dancers shunned by their respective communities and driven to hitch and stomp in secret, on the edge of the night. And rightfully so. New government bodies encouraged people to explore and love all kinds of dance, music, sport and culture. Everything from line dancing to salsa, ice hockey to circus skills was sponsored by European peace money and celebrated with aggressive enthusiasm. And strange as it is, line dancing does have the ability to unite a divided people. You might faint at the sound of ‘The Soldier’s Song’ or have a fit when you hear ‘The Sash’ but I’ll bet you’ll sing along to ‘My Achy Breaky Heart.’

Critical reaction to Fodder has been mixed. Clare Shannon reviewed it quite favourably in the Belfast magazine Formight, proclaiming, ‘It’s a first novel full bf funny observations, written with humour in imaginative Belfast-speak, with many local metaphors and references.’ But in the same issue, Robbie Meredith found something wanting in the way ‘nice middle-class lads and lassies write the working class as the bastard children of Quentin Tarantino and Charles Dickens.’

I’m not so sure about Dickens – though there are scads of characters to keep track of – but Tarantino’s dubious legacy does loom large over Fodder. After a while, the reader is likely to feel buffeted by graphic descriptions of just how thoroughly Cookie crumbles. When he’s not getting thumped by loyalist thugs or raped by dildo-wielding madwomen, he’s injuring himself with drink, drugs, and ill-advised assaults that take the highest toll on the would-be revenger. In between thrashings, he shits himself and throws up a lot. There may be a nosebleed or two in there as well, but after a while I started to block it all out. Cookie resembles a boxer you pray will stay down but who keeps rising again to take yet another beating. Towards the end of the book he’s even punching himself in the face. His hopeless and bloody quest for revenge might be a metaphor for Northern Ireland’s recent history, but after a while the reader is likely to feel nearly as illused as the book’s incontinent, bruised and scabby narrator.

Fodder‘s action – and the piling on of grotesqueries – accelerates in the final pages. Perhaps in an attempt to justify the stomach-turning revelation that reveals the truth about Cookie’s paternity, his mother’s disappearance and the book’s title, West refers to Titus Andronicus and has Cookie remind us that ‘Queen Tamara’s son was served up for her dinner.’ But West is no Shakespeare, and some readers will find her over-the-top histrionics hard to swallow. This excess is a pity, because, at its best, Fodder is an insightful, fresh and funny look at contemporary Belfast.

Maria Behan is a fiction writer and journalist. She lives in San Francisco these days, but she left her heart in Dublin