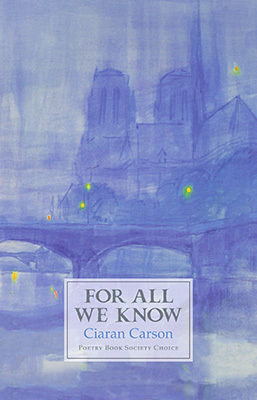 For All We Know

The bells toll, a bomb explodes and with a backwards glance, Ciaran Carson abandons the familiar territory of Belfast, surefooted however on the recognisable moiré terrain of his fourteeners. The structure of For All We Know is based, among other things, on Bach’s Well-Tempered Clavier; a two-volume composition containing a prelude and fugue in every major and minor key in the chromatic scale. Bach’s composition, expressed in fugue, demonstrated how an out of date form could absorb contemporary flavours, while Carson’s progressive composition is expressed in multiples of the sonnet. He is also cinematically at play with film noir, thriller and fairytale. This latest collection from Carson is a polyphonous narrative sequence where phrases collide and collude with one another, forming a mnemonic connective thread that strings us along.

Then slowly, slowly we would draw in on one another
until everything was implicated like wool spooled

from my yawning hands as you wound the yarn into a ball.
—‘Second Time Round’

At first the pattern seemed to be a Tree of Life,
but then the warp and weft began to shift and shimmer under us,

becoming now a dragon and phoenix in combat, now
a snarl of vines or snakes. Ensnarled and thinking to escape,

we plunged down through the ages till we landed on a field
of Afghan war rug bright with helicopters, guns and tanks.
—‘Je Reviens’

For All We Know is a lexical paper chase through Belfast, Berlin, Paris, Dublin and Dresden. Stasi waiters place listening devices in a couple’s room, a professor who knows too much (a characterisation of Glenn Gould, the pianist noted for his recordings of The Well-Tempered Clavier) disappears, a couple discover love—and its inherent suffering—after a bomb blast in Belfast, and assignations are arranged on a bare train platform after midnight. Noted clues are written in invisible ink, and within the antechamber of memory reside apparently neutral objects: a patchwork quilt, timepieces, trilling telephones and tolling bells, an Apple Mac, an ‘apple called Discovery’ and always, the irrevocable fall of snow. Reverberating within the inner ear—the vestibulocochlear nerves—striking connective chords to further tags and referents, these repeated fugue-like phrases are the means by which Carson remembers, re-imagines and reiterates.

As you might hear every possible babble of language
in bells that tumble and peal to celebrate victory;

as the quilters make a pattern of their remnants and rags,
and the jersey, unravelled, becomes a new skein of wool;

as the fugue must reiterate its melodic fragments
in continuously unfinished tapestries of sound;

as the police might have trawled the wreck of your Déese
in search of the twist in the plot, the point of no return;

as the words of the song when remembered each time around
remind us of other occasions at different times;

so I return to the question of those staggered repeats
as my memories of you recede into the future.
—‘Zugzwang’

Within this euphonious narrative, Carson returns once again to the realm of memory. In Belfast Confetti, the city of Belfast, and indeed its history, was misremembered:

The linen backing is falling apart—the Falls road hangs by a thread.
When someone asks me where I live, I remember where I used to live.
Someone asks me for directions and I think again.
—‘Turn Again’

Recalling that for Carson, Belfast—a city being torn asunder—is ‘the mouth of the poem,’ we arrive, via his memoir The Star Factory, at a narrative that deconstructs the reliability of memory: ‘Remember the fountain pen rep you met in wherever? / I said, Dresden, you said. I thought it was Berlin, I said.’ (‘To’). Or as Tom Waits would have it ‘and their memory’s like a train / you can see it getting smaller as it pulls away.’ (‘Time’) We are led then to suspect both narrators’ ability to remember. Instead, once beyond the too often historicised Belfast, we enter a multi-dimensional maze of memory that echoes, cuckoo like, across the vast expanse of Carson’s imagination:

The game itself was difficult to visualize. I thought
of a chess more infinitely complicated than chess,

played in three dimensions, if not four or five,
for the game, as I understood it, could admit of most anything,

though politics was frowned on.
—‘The Shadow’

In a recent interview Carson spoke about being tired of the conflict, and of wanting to write a ‘nice love poem.’ In doing so, he leaves behind the finality of Belfast:

Irrevocable: five syllables like rapid handclaps
or a volley of gunshots. Then I told you he was dead.

How did it happen? I couldn’t say what reason they had,
or if indeed it was random, else someone else was meant,

I can see him standing next to me in the school yearbook,
I picture the faces of all those others now absent,

some by cancer, some by heart attack, some by suicide,
some by combatants known or unknown, if not by default
—‘Through [I]’

We arrive then to the moot ‘Irrevocable? Never irrevocable, you said, / picking me up wrong through the din of the coffee machine.’ (‘Through [I]’) So while the past cannot be fully recovered, neither is this narrative in any way chronologically finished, ‘continuously shifting melodic fragments that remain, in the ‘tune’ sense, perpetually unfinished.’ The multi-dimensional ‘game’ of this collection can be entered at any point, and its lexical notes, echoing from the snugs, antechambers, reredos and vestibules of the poems play prelude and fugue to Carson’s contrapuntal memory. The question remains then not as to whether or not you will read this collection, but how you will read it.

Some readers may be disappointed in the absence of an imaginative launch pad from which to leave Carson’s book. For All We Know is all encompassing, leaving nothing to chance; no loose threads as it were, this is the echo and the ecco of the tale well told. Carson’s long lines often tend to be fittingly misremembered. The joys of his poems are the texture in their presence, the nub of the thing delivered in his unique Belfastese, a voice that has very much softened from the shipyard rivet of previous collections to this meditative love sequence. Carson’s behind the hand sense of humour is also present; ‘So what /did I do? I told him I was a writer, not well known.’ (‘Redoubt’) Following the film noir genre, there is much to be wary of in the smoke and mirror accounts of fake Mont Blanc pens, doppelgänger, footsteps criss-crossing in the snow, and characters assuming each other’s identities.

You were in Paris, disembodied and invisible,

swooping round the Eiffel Tower and down the Invalides.
You glimpsed her walking by the Seine. You glided behind her.

You knew by the cut of her clothes it was 1940.
Before you knew it you entered her clothes and became her.

And you found yourself walking, walking, as the church bells tolled
and tolled, announcing the hour of your next assignation.
—‘Collaboration’

Keith Payne is the Ireland Chair of Poetry Bursary Award winner for 2015-2016. His collection Broken Hill, (Lapwing Publications, 2015) was followed by Six Galician Poets, translations of contemporary Galician poetry, (Arc Publications, 2016). He is co-founder and co-director of POEMARIA International poetry festival, Vigo and director of the La Malinche Readings between Ireland and Galicia. keith.payne@mac.com