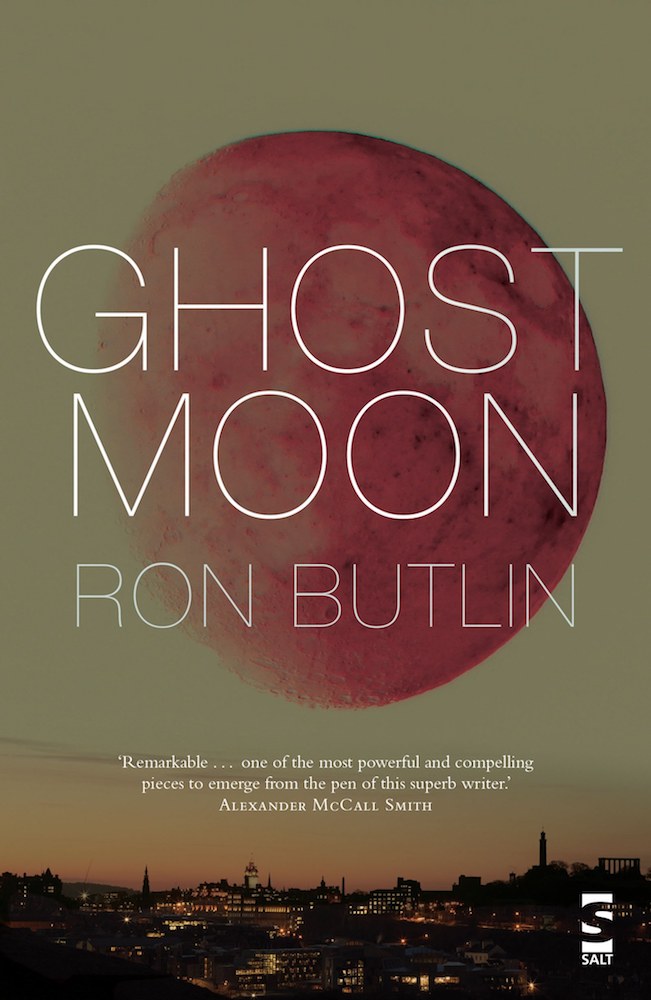 Maggie, the protagonist of Ghost Moon, has the ill luck to exist in an era in which ‘girls became women became wives became mothers—that was the proper way of it, the only way’. Her marriageable years are expended working in a munitions factory during the Second World War, and when she returns to the reopened Edinburgh dance halls in its aftermath, she finds that bachelorettes outnumber bachelors ten to one. The only man to approach Maggie hoaxes her into a one night stand which leaves her pregnant at the age of thirty.

In recent years I’ve been made all too aware of the injustices suffered by unmarried mothers in Ireland during the last century. What I tend to forget is that it happened in other countries too, and can’t be blamed solely upon the institutions of the Catholic church. Ghost Moon reminded me that in many instances it was the pregnant girl’s own family who left her wailing at the laundry gates. On hearing the news of Maggie‘s condition, her parents immediately cast her out. When she returns home after a protracted absence, she hopes they’ll have ‘had time to cool down’, but instead they act as though their dissolute daughter has become invisible. She goes upstairs to her old bedroom only to find ‘no pictures on the walls. No books on the shelves. The mattress stripped.’ Maggie learns the hard way that there’s no redress when it comes to family.

Butlin is Edinburgh Makar (poet laureate) and Ghost Moon is his fourth novel. His singular debut, The Sound of My Voice, was originally published in 1987 and most recently republished in 2002 with a foreword by Irvine Welsh proclaiming it an unsung classic of Scottish fiction. It charts the downward spiral of Morris Magellan, a thirty-four year old husband, father and executive of a biscuit company, from functioning alcoholic to wretched drunk. The Sound of My Voice is a striking tale of struggle against the arduousness and fundamental pointlessness of life. It’s also a brilliant exercise in second person point of view.

The chapters of Ghost Moon set in the early 1950s are third person subjective, but these are interspersed by chapters set in the present and narrated in second person, beginning with the Sunday upon which Maggie’s son, Tom, visits her cottage to find his mother has abruptly lost her mind. They proceed across each subsequent Sunday as he visits her in Rosehaven nursing home.

Second person point of view works so exquisitely in The Sound of My Voice because it’s about a man who talks lies to himself all day; it fits the novel like a kidskin glove. In Ghost Moon, sometimes ‘you’ is Maggie and sometimes ‘you’ is Tom. While these chapters are still finely executed, the second person seems unnecessary, or at least, not so well justified by the story or characters it carries as it was for Morris Magellan and his deceits.

The most successful characters, to my mind, are people who I’d revile in real life, but the most successful writing convinces me to care about them nonetheless. Morris Magellan is a superbly unpleasant character, yet even after he’s punched in the glass of the cocktail cabinet and is kneeling on the floor swigging a bottle of gin, I still want to clean the blood off his fists and tell him the same lie he repeatedly tells himself, that in the morning it will be possible to start over again, that every new day is ‘the first day.’ Morris Magellan believes we were all born with twenty points and, like in the school tests of his boyhood, ‘each time you made a mistake you lost a mark.’ In Ghost Moon, when first we meet young Maggie, she is nothing of the dissolute her parents have condemned her to be. With the exception of the accidental pregnancy, she’s the full twenty points, a nice girl to her bones. I should by rights have been rooting for her, but instead I was rooting for her to show a little more spunk, to do something I could not predict. It’s not until the book is almost finished that young Maggie manages to shed a few more of her points and some of her insipidness to boot.

Perhaps I am being needlessly harsh on Butlin’s fourth novel by comparing it to his masterful first. Most of what was great about The Sound of My Voice endures in Ghost Moon. The structure is solid. Grim humour abounds. Sentences are neatly clipped and paragraphs always cut to the quick of the matter whilst being simultaneously poetic. Close attention has been paid to the joining up of details between past and present. Once she is in Rosehaven, for example, Maggie finds that all her fellow patients are women and so her flagging memory recovers the dance halls of her youth. She is once again amongst a surfeit of females waiting for a man to enter, to single her out, to approach. Only this time, the man is her son.

‘Time is the sense of longing you feel to be elsewhere,’ Morris Magellan tells himself in The Sound of My Voice. Both time and longing loom large throughout Ghost Moon. When young Maggie returns to her parents house only to be ignored, she rips the pendulum out of the grandfather clock and thrusts it into the harbour. As she stands on the quayside, ‘its hateful tick…tick…tick… choked at last to a permanent silence’, she is momentarily comforted. But the pendulum comes back to haunt Maggie, first when she’s still a young mother fighting to be allowed to take care of her child: ‘Their longed-for life together lay only just beyond this one same day that kept repeating itself over and over…’ And then later, in Rosehaven, the grind of the clock ultimately grows intolerable: ‘Anyone coming in the door can tell what time it is by how far the sun has travelled around the room and who it’s pointing at. It’s Dorothy o’clock now. The old woman doesn’t move a muscle, doesn’t even turn away to shield her eyes.’ And then there’s family, its insuperable burden. For Morris Magellan, his wife and children are as much a source of his trouble as is the demon drink. For Maggie, instead of learning from the mercilessness of her parents, she still longs more than anything to create a family life of her own. It’s this longing that perpetuates the arduousness, and cumulates in fundamental pointlessness as the baby who Maggie sacrificed so much for and drudged so hard to keep, grows up into a repulsive man, a bawdy TV magician with a flotilla of broken marriages in his wake.

On his Sunday visits to the nursing home, Tom fiddles with his iPad or fantasises about making the attractive nurse his new assistant, dressing her in something sexy and sawing her in half. Butlin never convinces me to care for horrible Tom as he did for horrible Morris Magellan but at the novel’s end I care about old Maggie much more than when she was young. Her son has become in middle-age the same sort of male chauvinist she was oppressed by in the 1950s, and I can’t help thinking what a wasted effort all her toils have been.

Sara Baume won the Davy Byrne’s Short Story Award in 2014, the Rooney Prize in 2015, and the Geoffrey Faber Memorial Prize in 2016. She is author of two novels, Spill Simmer Falter Wither and A Line Made by Walking.

View from Inside the House