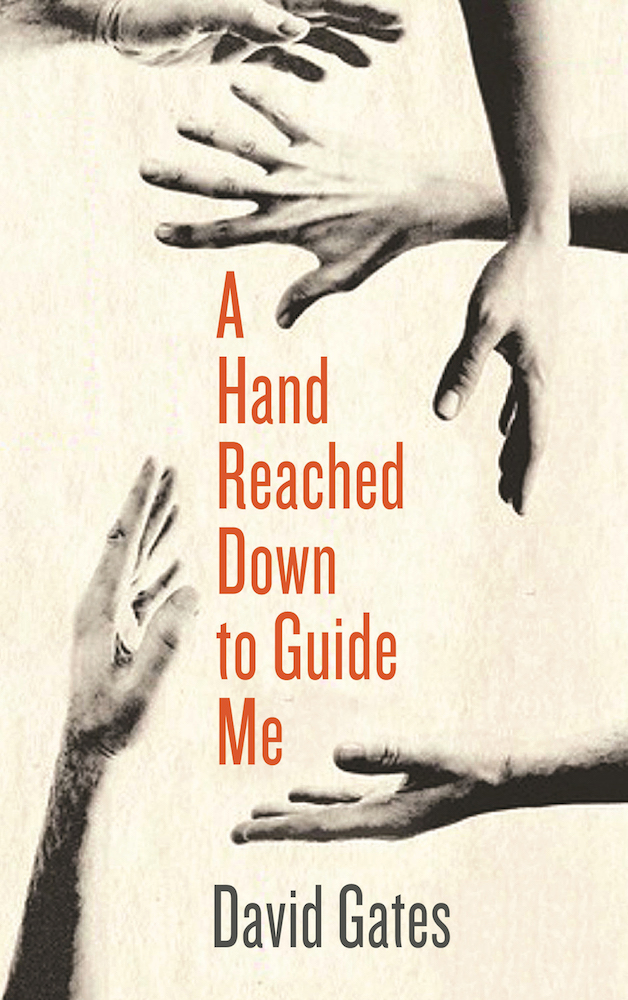 A Hand Reached Down To Guide Me

It took me six weeks to read A Hand Reached Down To Guide Me . After the exhilaration of the opening story, ‘Banishment‘, I’d read a few pages, put thebook down, then delay picking it up again for as long as possible.

To be clear: the writing in here is stunning. ‘Dark and funny, bleak and brilliant… David Gates makes me sick with envy,’ Nick Hornby blurbs, and as hyperbolic as the blurb sounds, I’m with Hornby on both his assessment and his envy. Gates writes as though he has long since cracked the code and is now free to improvise, which he does with some style. There seems to be nothing he can’t do with words and narrative and characters.

‘Banishment‘, like all the stories, is set in a narrow East Coast strip, where the characters understand ‘that East Coast thing ’. In five parts, over ninety pages, the narrator, a woman in her fifties, reflects on her two marriages and subsequent lesbian affair. It is described as a novella, though—without digressing into formal theory and questions of word count—I read it as a long short story, in the Alice Munro or Richard Ford sense. But however one choses to categorise it, this is startlingly good writing.

It opens with the narrator at the juncture between her marriages:

On the morning I was to be married for the second time I found myself going to my knees in the shower and praying: that my ex-husband would find love again, that I would always love my new husband and that whatever pain I had caused in my life would be forgiven.

She proceeds to expound the considerable pain she has caused others: she ‘stole (her husband) from a nice girl’, while having an affair with a married man (‘shockeroo, right?’), but her voice is so compelling we can forgive her disregard for the usual moral sensibilities.

In general, Gates’s protagonists are acutely aware of their own failings, and their trick is to pre-empt criticism by criticising themselves first. Hyperconscious of their narrator status, they allude to the narrative process itself, and directly address the reader, as if to do otherwise would be dishonest, and just a bit silly.

I stayed faithful to my first husband for five years, which doesn’t make much of a story, so I’m not going to string this out.
But let’s not get ahead of our story.

Gates maintains absolute control over his material. Nowhere is this more evident than in his transitions. Almost forty pages after the opening scene of ‘Banishment‘, in which our narrator tells us about her first marriage and her affair with the older man who is about to become her second husband, Gates simply leaves a line break:

So, a month later I was taking that shower…

A couple of pages later, he returns to the same scene:

And before we leave the wedding day behind, just one final word about my little moment that morning; I don’t want to keep coming back to this as if it were some big motif, though I might be tempted to hit it one more time near the end, for the sake of symmetry. So probably every film critic in the world has already figured this out… but in Psycho, in the shower scene… To part the curtain, raise the knife and freeze me in a state of grace. Now there’s a cadence, or am I flattering myself?

This is highly sophisticated storytelling, though the idea that a reader might stumble on the Psycho  connection is laughable. Allusions, motifs, metaphors—all the sneaky tricks of writing—are Gates’s toys. Gates, the longtime Newsweek editor, is catching the thief (critic) by thinking like one, and it’s child’s play to him.

However, one can begin to feel that this authorial control leaves little room for the reader.

The stories are so cleverly constructed that it is nearly impossible to find fault with them. Any feminist critique, for example, is forestalled by his balance of misogyny with feminism, as when, in ‘Desecrators‘, the older academic says to his young student/mistress:

‘Why don’t you start getting us settled in. This place needs the woman’s touch.’
‘As soon as I unpack,’ she said, ‘I’ll go out and pick a frisson of hysteria.’

Gates seems loath to allow any moment of beauty or lyricism to remain untouched by irony:

I heard only the lowing and the clattering of a train passing through, down along the river.
[line break]
Oh my—that was a little gothic-y. Let’s get a grip before we have my mother sucking cocks in hell.

Or again, in ‘Alcorian A-1949‘, Gates—with his cynical, critic’s eye—writes: ‘In the silence—watch out for the false ending now—I heard an apple fall.‘

He never allows us to forget that he is in the business of constructing stories. In ‘Round on Both Ends, High in the Middle‘, the narrator tells us that, these days, he’s out of debt, ‘like wise old Ben Franklin but not so fat and femmy’. He reminisces about pushing his son on a swing, but then, as if catching himself indulging a moment’s sentimentality (this ‘him’ is now some sort of amalgam of Gates and his narrator), he circles back: ‘Let’s get back to something like Ben Franklin being fat and femmy, that was good.’

It was good, and it typifies the humour these stories are imbued with, humour which saves us from drowning in the despair it is covering for (and which could almost, almost make us believe the high ratio of available young women to older protagonists in these stories). But it also makes one wonder why Gates is so afraid to permit his characters honest emotional responses. He can easily— brilliantly—give us what we need to fill the ‘story-shaped hole’, as I once heard our need for stories described, but he seems compelled—perhaps by his need to avoid accusations of sentimentality—to take it away at the same time.

Somehow, despite at the time living in the U.S. and working in a bookstore, I missed out on Gates’s 1991 Pulitzer-shortlisted novel, Jernigan (recently reissued by Serpent’s Tail), an oversight I finally remedied. It’s a great read, featuring a middle-aged alcoholic so ironic that no one around him can keep up. If the stories in A Hand Reached Down To Guide Me are read in chronology of publication (as opposed to the order in which they appear in the collection), and in conjunction with Jernigan, one gets a growing sense that Gates is questioning the very art form in which he is working; as if, grown leery of fiction, he is throwing away its tools:

Fine: he’s constructed the narrative he needed… but if I’m going to bring my own story to an end—look how little of it is left—while making it seem to have some sort of shape, I’ll need to fasten on some more or less random moment and claim that right there was the point before which and after which. My plan had been to bring it around in a circle, back to that stagy little prayer in the shower, but how bogus would that’ve been?

The ‘bogus’ circular ending of ‘Banishment‘ could be read as a critique of this first novel, in which Gates was happy, or at least willing, to return at the end to the novel’s opening, where we realise that its eponymous anti-hero is in rehab, telling his story.

Most of the protagonists in A Hand Reached Down To Guide Me could be older Jernigans, and as it is almost twenty-five years since Jernigan was published, it is not a stretch to imagine that its author might by now be looking back at his life’s work, inextricably bound up with fiction, perhaps considering his own mortality. This brings us neatly back to ‘Banishment‘—how bogus is that? —where, as usual, Gates has got there first to puncture any such theories:

The other day I went with Andrea to a memorial for the Newsweek writer, who’d somehow managed to make it to seventy-six, because who wouldn’t be curious…

Nevertheless, mortality is certainly on his protagonist’s mind:

I do believe this much: sooner or later… you’ll have to look at exactly who you were and everything you did, and it’s going to be a shitshow.

Flattened under the weight of so many misogynistic old bastards, it was a real effort to return to the beginning of the book again. Only now did I see the advantages ‘Banishment‘ had in being first in the collection, and in having the book’s lone female protagonist, and I feared my initial enthusiasm might have been misplaced. However, it was even better the second time round. So much so that I wondered whether it could have succeeded as a stand-alone publication. Certainly, I had reservations about the wisdom of placing so many similar stories back to back. However, the journey through the stories, and out the other side—especially when read with Jernigan—has a narrative arc of its own, culminating, in the titular story, in redemption of sorts, where the narrator does not yield to the expected cynicism but instead fulfils the not-inconsiderable request of an old acquaintance to be allowed to come to his home to die. For the reader, this provides welcome relief from an excess of irony, and I like to think that, for Gates, it represents his coming to a sort of peace with fiction.

Paula McGrath lives in Dublin. Her first novel, Generation, was published in 2015, and A History of Running Away, her second novel, will is forthcoming in June 2017 (both John Murray Press). She has a background in English Literature and is currently a doctoral student at the University of Limerick. She received an Arts Council literary bursary in 2016, and was recently Irish Writers Centre Writer-in-Residence in St Mark's Cultural Centre, Florence. In another life, she was a yoga teacher.