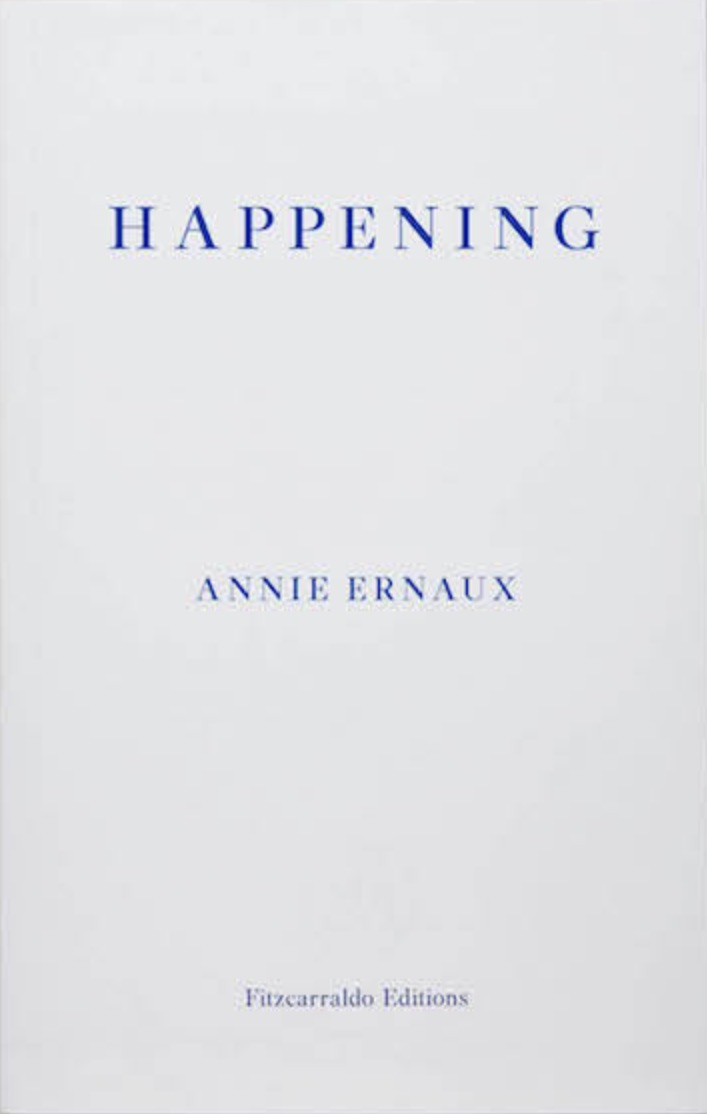 When reading this truly remarkable, deep-reaching reflection on an illegal abortion, finally procured by the writer Annie Ernaux in 1963 France, I was stopped short by all sorts of memories, long drowned or safely locked up. Curiously, among them I remembered meeting a man who was writing a book about the meaning of time. He told me this so sincerely I felt I had to say something to occupy the silence surrounding the statement. I found myself asking him how long he’d been at it. The words were out before the makings of a bad pun hung in the air. Our lunch didn’t go well, although I’ve remembered other things about the conversation, so maybe the value was in the aftertaste. On the way home I tried to think of different kinds of time in my own life, because minutes are never the same. How they speed and then how they slow. And that is at the heart of Annie Ernaux’s brilliant historical snapshot. It sounds strange to say that a book about such a subject is a gem and yet it is just that.

Of course it is about other things too – memory, history, writing; illuminated by how the body controls all, especially when it gets itself pregnant. Because that’s the best way of looking at the disaster. Surely we couldn’t put ourselves in the way of such catastrophe, surely the body must have done such a thing all on its own. And when it has, now begins the relentlessness of the watching for period blood. No hours are longer. Annie Ernaux manages to portray the humiliating claustrophobia of the wait. She also pleads our case for how it happened: “When I made love and climaxed, I felt that my body was no different than that of a man.” Ah yes, indeed.

I’m wondering if it’s possible to imagine how all-consuming the wait becomes when a pregnancy is not wanted. How long is any day? How long is a day when a period is overdue? And how life is put on hold, how nothing else matters. Annie Ernaux puts it perfectly. “One week later Kennedy was assassinated in Dallas. By then I had lost interest in that sort of thing.”

When it becomes clear that Ernaux’s pregnancy is not going to disappear, she begins the task of trying to find an abortionist. A backstreet abortionist, as they were called in any of the literature of the time that dared mention the name. Backstreet means unsafe. I had a badge in the 1980s, a broken coat-hanger dripping with blood. I put it on when we went on demonstrations for the Right to Choose. I didn’t wear it everywhere and sometimes, depending on the company, I covered it up with a snazzy scarf, in order to protect the underground nature of the entire business of unwanted pregnancy. Those demonstrations, in and around 1977, were the beginning of the Irish demand to give women safe control over their bodies. Unfortunately we got stymied by over thirty years of the Eighth Amendment. But I wasn’t to know that as I shouted out “Take your Rosaries off my Ovaries”, while pushing a boy in a buggy and wearing a loose characterful silk shirt to cover the shape of the next one. We wore pregnancy chic like that then, for some reason not thinking that outlining our distending belly button was stylish. Weren’t we just weird.

I was with the student Ernaux all the way as she began this secret journey.  She goes to see a man, a married father. She has helped him with notes on a lecture about Victor Hugo, so they have a camaraderie. She knows that he’s involved in some kind of movement about planned parenthood, so he should be a good start. Firstly he shows fascination, because clearly she has moved from being a girl who would say no to one who has definitely said yes. He tries his hand, naturally, because it would be silly not to; he can’t get her pregnant. Later in the week it becomes clear that he won’t actually help her because his political activity would be compromised on ‘moral grounds’ if he loaned her money for an illegal abortion. Yet he remains almost excited about her predicament, he wants to be at the forefront of her drama, wishes to see the show without having to pay any price. Ernaux describes this without apparent judgment, she leaves it up to the reader to exercise their own.

The search for information is conducted with the grinding predictability of dead ends. I remember the seediness attached to that journey. I remember a man approaching me on behalf of his girlfriend. It was the least he could do. He had got my name, and address, from someone who vaguely knew me from my very occasional visit to Grogan’s. I was so sad for that woman, who presumably would have preferred to get the telephone number, privately, from a reputable clinic instead of through a pub grapevine. We had already had our names taken by Gardaí for daring to sell Spare Rib, a London-based magazine that did publish such numbers. You didn’t stand up for women’s rights to bodily integrity without getting a file opened. The Irish Women’s Abortion Support Network, who helped women arriving alone in London, always had to be circumspect about who knew they were in the group. And so it is in France of that time too. When Ernaux manages to survive the botched back street abortion, and returns to some kind of normality, lots of people have information for her, now that she doesn’t need it. But if they’d given it to her when she did they would have been complicit in illegality.

There was a moment in the reading when, with my ingrained antipathy to telling too much about ourselves, I thought about the conflict between privacy and necessary publicity. Because, let’s face it, we’d all prefer to keep our abortions between ourselves and a chosen very few.  The right to choose must also include the right to privacy. I might be a tad Neanderthal on this one. I’m with the women who might want to give birth with the significant other safely walking the corridor outside, rather those who are happy to have a documentary made about the centimetres of their dilation.

But yet I was fascinated by every detail of this most privately revelatory of books. There’s something seriously important about the history it lays bare. In our country we have some people saying that the youth of this age repealed the Eight Amendment as if there was no historical groundwork behind that day.  That lack of attention to the past is dangerous. The same applies to all other important movements. If history is not known the wheel has to be laboriously re-invented every generation and the same mistakes repeated.

This book is about more than putting the lonely, frightened, essential, determined journeys of individual women at the heart of literature. It’s about the art of writing, about political social history, about where this woman’s abortion fits into that. It’s about the noticing we do, what we actually see and how we react years later. As well as about the sometimes damned unfairness of being a woman, of having thought that the climaxes were equal. And before we go any further, yes I’ve known good men who cried with relief when the period arrived, but I’ve known more who ran like the clappers. And men who asked are you sure it’s mine? Positively the greatest insult ever. Although it’s a perfectly reasonable question in other circumstances, these circumstances are not reasonable. There the woman stands, unequal in the face of that question, because she will never have the luxury of asking it. Lads, if in doubt, I’d wait for the DNA. And be more careful the next time.

In the way that men grab their testicles, as if to protect them with all they’ve got, when they see a sportsman getting a wallop in those regions of the body, women might want to curl up in bed with a hot water bottle after reading this book. They might like to shed a few tears. They should then get up and toast the long line of women who have tried to help over the generations. I raised mine to Nurse Cadden.

Happening is translated by Tanya Leslie.