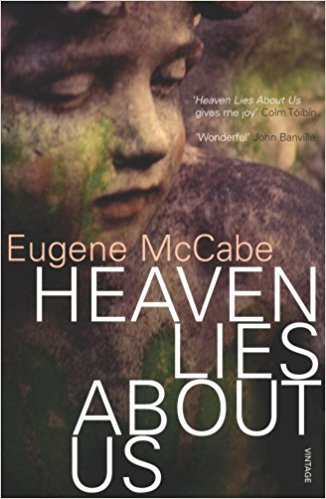 Heaven Lies About Us

In Ireland, not long ago, there was a lot of religion going on. Then there was a sudden change in the weather and we agreed we had been taking it all too seriously. And yet, until now, Irish writers had to take religion very seriously, either in reaction to it or simply to describe what was happening around them. This rupture in Irish life has also created a rupture in Irish writing.

‘These superb, sorrowing tales are not old-fashioned, only timeless,’ says the cover-blurb by John Banville, as if anticipating a criticism of Eugene McCabe’s latest book. McCabe’s issues with the Church and with religion do read like something from another era, and the polemical aspect of his writing will tend not to speak to a reader who does not remember how it felt to live in a theocracy. But there is much more to McCabe than polemic.

The title story, ‘Heaven Lies About Us’ (1996) depicts a holy Ireland of some decades ago, where the good folk have their heads turned to the sky and tend not to notice bad things happening in the immediate vicinity. A character called Iggy (Ignatius Loyola, of course) has a lust for life that extends to his young sister. The subject of the hypocrisy of holy Ireland has become a staple of our national discourse, and such a story seems to shout out that a Theme is About to be Addressed. You are tempted to ask why we need an attack on our sanctified vision of the holy Catholic Irish nation after it has already collapsed.

Were Eugene McCabe a mediocre writer, this problem, combined with the intrinsic difficulty of the subject, would ensure disaster. But Eugene McCabe is not a mediocre writer, and ‘Heaven Lies About Us’ succeeds because he credibly describes the world of a young girl who is unable to find a way—or even the words—to express the horror of what is happening to her. It is a fitting start to a selection of Eugene McCabe’s shorter fiction from over three decades.

It also shows McCabe’s growth as a writer over those decades. The most flawed stories are the novellas ‘Heritage’ and ‘Victims’ (1976), originally written as drama for RTE. McCabe’s analysis of a small border community is meticulous, and ‘Heritage’ opens with Eric, a young farmer and UDR reservist, receiving a death threat. It is a detailed and dramatic story, the characters well drawn and the dialogue realistic. The flaw is that The Theme saturates everything, all the time. Erics’s parents, for example, have a dysfunctional marriage, brilliantly rendered through stabs of dialogue. But it’s still about The Theme. Eric’s father, it transpires, did the dirty deed years ago with a Papist bitch. And Eric’s brother has gone off and married a Taig! (The father accepts this choice but the mother has principles). And when, at the end of the day, Eric’s uncle commits a tit-for-tat murder (Eric’s prospective father-in-law having been murdered by the IRA), the victim turns out to be none other than Eric’s Papist half-brother! It’s too crowded. And heavy. When Eric states something like ‘We didn’t ask to be born here,’ you feel there is something more French-existential than Fermanagh-agricultural going on. You want to admire the work that went into the creation of such a story, yet feel it would have benefited from less.

As would ‘Victims’, where some unconvincing IRA-heads take some hostages, and in the course of a sleepless night discuss The Theme from every angle. There is much good stuff there, but there is also the suffocating sense of a made-for-TV drama where it all gets said in an hour. History, nationalism, religion and literature all get discussed. The Bible gets quoted, and possibly Shakespeare. (It might have been Spenser—I don’t feel like going back to check.) Any attempt to lay bare the north in the second half of the 20th century, in its entirety, would require a wider geographical and temporal canvas, room for the characters to move and breathe and engage in activities other than being sectarians, and would also need to include a few Republicans who are credible human beings. (The fact that RTE censored Republicans in this period is not Eugene McCabe’s fault, but deserves to be noted).

As yet no Philip Roth has emerged from the streets of Belfast, though a number of writers have written memorable stories that in some way relate to the troubles, notably Bernard MacLaverty’s Cal and Dermot Healy’s A Goat’s Song. The protagonist of Sean O’Reilly’s The Swing of Things is an ex-republican prisoner. Ronan Bennett, who was himself a republican prisoner, analyses sectarian conflict in Havoc In Its Third Year, which is set in England during the Reformation. These novels work precisely because they are not about the North.

‘Cancer’, the shortest of McCabe’s trio of Fermanagh stories, shows the least labour and the most inspiration. The Theme is there still, yet the story seems to spring more from the heart of Eugene McCabe. Because the deeper theme is mortality, a man dying of cancer, against the background of a land poisoned with conflict. The closing lines are memorable: ‘”What would you call it, when your own brother goes contrary, and the ground hungry for you…eh! Rotten, that’s what I’d call it, rotten.”’

The four stories from Tales From the Poorhouse (1999) are set in the Famine. The suffering of the Irish nation is a theme sure to repel the modern writer, and more so since Liam O’Flaherty wrote about the famine and did it so well. Yet McCabe travels this ground with assurance and creates something fresh, that speaks both as fiction and as history. The four connected tales are told in the first person, narrating shared events from disparate perspectives. They each work as short fiction while together provide a larger, novelistic sense of a society disintegrating in the face of mass starvation. The writing is raw, direct, funny and vulgar and comes across as authentic and personal. This triumph of style is no small achievement. His lyricism here, in a world that is credible, is finally affecting in a way it fails to be in ‘Heritage’.

McCabe’s interest in the role of the Church, and the hypocrisy of the holy, remains as sharp as ever. In the voice of the Master of the Poorhouse:

If I had my way I’d consign most holy men to the idiot wards but then the paupers would be desolate. They cling to them, hang on their every word. Heaven’s next door, over the hill, upstairs, round the corner, destination of the destitute. Naked, diseased, raving, filthy and skeletal, they go straight to the arms of Jesus and Mary!

‘Roma’ and ‘Music at Anahullion’, both from a 1985 collection, are short masterpieces of simplicity. In ‘Roma’, a simpleton called Mickey is in love with a young woman called Maria. It is a pure, religious love, not of this world and not able to withstand it. McCabe’s obsession, again, lies in the distance between heaven and this world. It is a sad story, with a vein of humour. Mickey shares a shack with Joe the Bush:

Mickey lay back on the bed dressed and looked through the skylight at the stars. Joe the Bush began to shift about, abusing himself as he did most nights. The springs skreeked and the broken castor scraped on the wormy boards. Mickey listened.
“God sees you, Joe.”
“For Christ’s sake shut up, you eejit. They’ll lock you up like your father.”

Maria, having found out that Mickey worships her as a holy virgin, tells Mickey that if she loved a fellow she would lie with him and make him happy. Mickey flees.

“But I didn’t mean anything,” she thought. What made her say it when she knew what he’d written and how he thought about her, it was like mocking a cripple or putting poison in a baby’s bottle.

Mickey heads into the wilderness.

He went out the west road heading for Leitrim. He heard a man say once there was nothing left in Leitrim now but bare mountains, empty houses and the bones of sheep. The hedges gave way to a straggle of whins. He looked back and down. The town was gone in a smore of rain. She too would die in his mind and be forgot, like when a body died. Later there were cars, trucks and vans; children on a school bus looked out pointing and laughing. He went up a branch road. He would find his way through side roads and lanes. There was no going back. Tired he sat on a ditch and looked at the country, the sun lost in clouds, thousands of crows flying somewhere, over dark lakes, November again, a thin wind, and the fields sodden.

‘Music at Anahullion’, a story that reminds you of the best of John McGahern or William Trevor, describes the lives of three unmarried middle-aged siblings, sharing a house on a small farm. Liam, the tight-fisted and pious elder brother, owns the land and house. Younger-brother Teddy pays Liam rent, doesn’t attend mass, drinks and, according to Liam, ‘Knows all the bad weemin in the country.’ Annie, the sister, keeps house. One day she sees an old piano at an auction. Maybe a visitor would play it, or she could learn to pick out a tune, or they could put candles on it at Christmas. The piano is her dream of another life. Teddy buys it, as a surprise for her, and perhaps to make Liam sour (Liam doesn’t like buying frivolous things, or want others doing it in his house). The description of Liam and Teddy trying to wrestle the piano into the claustrophobic parlour is emblematic of another struggle between them. Liam doesn’t want it to fit, Teddy can’t take defeat even when it becomes clear that the stairs are too close to the door and it just won’t go. The piano ends up in the turf shed, and the next morning Annie drapes her dreams with plastic fertiliser bags.

The guinea hens roosted in it all winter. Near dark one evening in February she saw a sick rat squeeze in where the pedal had broken off. By April varnish was peeling off the sides. One wet day in July Teddy unscrewed the brass candlesticks. On and off she dreamed about it, strange dreams that made her unhappy.

Winter comes again and, sick looking at the thing, Annie has Liam smash it for firewood.

You read the eleven pages of ‘Music at Anahullion’ and the story stays with you. And you wish the editor had not watered down the strong distilled effect of the best of McCabe with the eighty pages of ‘Victims’.

A Story Of Our Time: Notes on Kafka’s The Judgement