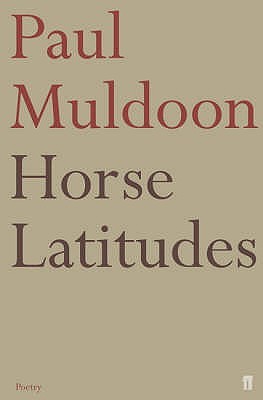 There is a moment in Paul Muldoon’ s meaty new collection that threatens to cement forever the popular conception of the poet as a compulsively referential pun-master. In ‘Sillyhow Stride’, a poem in memory of the singer-songwriter Warren Zevon, Muldoon writes of ‘a headless Childe Roland / coming to his dark twin towers of silence‘. In the space of a dozen words he manages to cram references to Robert Browning’s ‘Childe Roland to the Dark Tower Came’, Edgar’s feigned madness in King Lear (from where the Browning poem draws its title), and Zevon’s own song ‘Roland the Headless Thompson Gunner’, itself long held to be a metaphor for the kind of Western imperialist intervention which contributed to events like the attack on said ‘towers of silence’.

It seems that wherever you go, Muldoon has been there just before you. For instance, the ‘Childe Roland’ author is signposted much earlier by the appearance of ‘a 50. caliber / Browning with a dodgy breech‘, while the Thompson Gunner himself is introduced, in a surreal reworking of Zevon’s original lyrics, battling ‘the Bantu to their knees / the Bantu who boogie-woogied‘. This constant back- and-forth is exhausting, but never less than worthwhile. Indeed, the deftness and depth of all these new poems is awe-inspiring, and the ease with which Muldoon collapses pop culture, geo-politics, elegy and literature into the space of one or two lines is literally frightening. Horse Latitudes, his tenth major collection, is rife with just these moments of incendiary, obsessive genius, and while ‘Sillyhow Stride’, in its image of John Donne’s ‘Glock / on his dish in the cafeteria‘ (which parodies the sleeve art from Zevon’s Excitable Boy album) will delight music enthusiasts of the Nick Hornby variety, the poem also functions as an efficient and energetic synopsis of Zevon’s life, career, and his friendship with Muldoon.

A similar memorial is erected by the title poem, this time to Carlotta, a former lover fighting the onset of cancer. A dense sequence of 19 sonnets, ‘Horse Latitudes’ carries with it echoes of Madoc, Muldoon’s 1990 mystery tour of historical and philosophical re-imaginings, but where that sequence derived its organising principle from the names of great thinkers and scientists, here Muldoon links the past and the present through a series of historical battles all beginning with the letter B. The Boyne, Bosworth Field, Bunker Hill, and Blenheim all make appearances, while Basra is mentioned but not Baghdad. It is as if the poet is telling us that particular battle is yet to be decided:

“Why,” Carlotta wondered, “the House of Tar?
Might it have something to do with the gross
imports of crude oil Bush will come clean on only
when the Tigris comes clean?”

This analysis, removed from events by the relative insulation of a Nashville hotel room, represents one of the quieter moments in a sequence beset at every turn by the graphically rendered horrors of tumors and mutilated pack mules, and couched in obscure allusion and anarchic wordplay. There is no point in denying that ‘Horse Latitudes’ is a difficult sequence. It is more elusive and more demanding than the simple find-the-reference of ‘Sillyhow Stride’, but comparably more rewarding in the way it deals with stagnation, mortality, regeneration and recurrence. The characterisation is richer too, as are the layered multitudes of possible interpretations. One can practically hear the academic word processors salivating already.

There is in fact so much going on in ‘Horse Latitudes’ that some readers may be relieved by the apparent simplicity of ’90 Instant Messages to Tom Moore’, a haiku sequence which serves as the fulcrum of the collection. This simplicity, however, swiftly collapses when one realises that Muldoon is transmitting these messages from the island of Bermuda, deep within the thematic doldrums of the collection’s title, and has flanked the sequence with two poems emphasising the word ‘riddle’. It is as though these haiku are meant as puzzles to be solved, a challenge set by this poet to his 19th century predecessor:

On one level this is merely another example of Muldoon’s lighthearted erudition, yet on another it represents his continuing obsession with poetic architecture. Here he satisfies his fixation through a re-invention of the haiku itself, hybridising its oriental precision with our contemporary, disposable, text message culture. Muldoon proposes the restricted syllabic length of the haiku as a precursor to the modern character limit on the length of a text message, and if the subjects of the resulting verse can sometimes appear quite arbitrary, one need only think of how random a week’s worth of one’s own text messages might appear in such a context.

Of course, Horse Latitudes also contains stand-alone poetry of considerable quality, and gems here such as ‘It Is What It is’ and ‘Hedge School’ can stand proudly alongside the best and most considered of contemporary verse:

It is what it is, the popping underfoot of the Bubble Wrap
In which Asher’s new toy came,
Popping like bladder wrack on the foreshore (‘It Is What It Is’)

Meanwhile work like ‘Eggs’ (‘It would be midnight when my mother’s mother got back // from Dungannon, now completely smashed / on hard liquor bought with hard cash‘) and ‘The Treaty’ (in which Michael Collins is described as ‘a right flimflammer’) provide a contrasting voice to the American twang adopted elsewhere. Muldoon is keen to show us that he has not abandoned Ireland, ‘The Old Country’ where ‘every shave was a close shave / and money was money for old rope‘. The broken bridges and weasel-words of his upbringing remain his touchstones, the source of his inspiration and the wellspring of his strange humour. Horse Latitudes exhibits these qualities with quiet perfection, and the result is a riveting walkabout through the imagination of one of our most rewarding talents, and a book with considerable wind in its sails.

Some Notes on Names and Deeds

During the Russian Blizzard