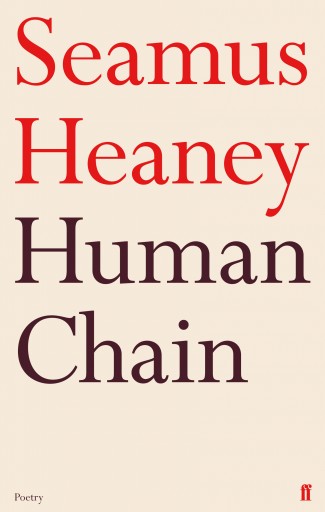 Human Chain is book of ghosts and goodbyes, a late masterpiece full of poignant farewells to family and friends among both the living and the dead. Populated by vibrant monuments to the most meaningful people and places of his existence, it is Heaney’s sepulchral version of paradise, what the resurrection might look like for him. It is also a book that is aware of a certain redundancy, a certain futility in its efforts to contact and conjure the dead, and to preserve their memory in the form of a putatively immutable and ever-living art:

Heaney’s early home life features more prominently here than at any time since his early collections. One has the impression of attending an extended séance, and of the ectoplasmic effort of making the vanished appear again before us. It is a doomed yet thoroughly engaging attempt to make the word into flesh. All of our senses and our emotions are charged:

Heaney’s attempts at literary reconstruction extend beyond his own life into events and contexts that made that life possible. In part III of ‘Album’ we are eerily transported to his parents’ wedding meal, where he, a ghost in his own pre-existence, is both there and not there.

It’s winter at the table where they’ve gone
for the wedding meal. And I am at the table,
uninvited, inelectable.

But Heaney’s efforts to remember his parents and others are at the same time an aching admittance that he properly cannot. In ‘Uncoupled’ he finds both his father and mother are fading from view. In the farm yard his mother ‘proceeds until we have lost sight of her’ and his father is ‘calling something I cannot hear’.

For this great poet of exactitude and clarity, renowned for his ability to produce the perfectly clear image, the perfectly representative phrase, the forgetfulness of old age is an anxious and unsettling experience.

It is also an unburdening, another aspect of the ‘letting go’ that comes at the end. ‘In The Attic’ depicts the ‘lightheadedness’ of old age in the rapturous image of ‘A cabin boy’s first time on the rigging, as the memorable bottoms out/into the irretrievable’. The motifs of a giddy relinquishing of control and certainty, and of a launching into the numinous unknown, recur throughout the book.

Most of the poems in Human Chain take place in a twilight zone between the here and the hereafter, where memories are purified and transformed into myth, with poetry as the means of transmutation. The pages are crowded with wraiths and shades and shining apparitions. Visionary moments commingle with earthbound description, and the dead and the living are in constant congress. At a wake attended by the whole of his rural community, the absent corpse of the drowned Michael Mulholland reminds us of the ever-presence of death-in-life. It is both there, and not there, at the centre of everything we do and share, including language, so that we are always discussing the thing we are not:

for three nights we kept the conversation going
around the waiting trestles. By the fourth
his coffin, with the lid on, was in place.
—‘Route 110’

In poems like ‘Eelworks’ Heaney’s rural pre-troubles Derry becomes a morbid utopia, too quaint and sanitised to have ever really existed, but nevertheless to be granted the uncanny afterlife of an art that outlasts its subject and its maker. Like all utopias it is created out of yearning for the harmonious integration of the divided world, of the self with the world, of the past with the present. In ‘Loughanure,’ part V, a present day Heaney, driving home in the shadow of Mount Errigal is:

trying
to remember the greek word signifying
A world restored completely: that would include
Hannah Mhór’s turkey chortle of Irish
The swan at evening over Loch an Iubhair
Clarnico Murray’s hard iced caramels
a penny an ounce over Sharkey’s counter.

There is an obvious connection between the urgent generation of an imaginary utopia and the proximity of death. The impending doom with which Keats was ‘half in love’ is the muse of Heaney’s reconstituted Bellaghy just as it was for the aging Yeats’s Byzantium. To make an all out appeal to eternity and to admit the inevitability of oblivion can amount to the same thing. The poet of Human Chain, ’alive and ticking like an electric fence,’ though shaken—one could equally say roused—by a recent brush with death, does not fear it. The post-stroke gaze he shares with his spouse in the emergency ambulance is ‘ecstatic’.

The only medium in which all of the contradictory elements at work in Human Chain can be simultaneously displayed, if not resolved, is of course multivalent, metamorphic language itself. As a linguist working in poetry, Heaney has few equals. One can imagine an alien or post-human philologist in a hundred million years time deducing the entire functional history of a long dead language from this collection alone.

At times we are back at very root of all tongues, in the imitative and emulative copying of environmental sounds.

In seggins
hear the wind
among the sedge,
…
in easing
drips of night rain
from the eaves.
—‘An Old Refrain’

The poem ‘Slack’ tells us how Heaney’s own original attraction to language was the fascination of imitation, the quasi-magical ability of onomatopoeic expressions to seemingly embody the things we make them represent:

If words, in the vitality that our socially shared understanding lends them, can make absences present to us, they can also, in their eventual and inevitable archaic muteness, signal the passing away of entire societies and modes of being. In part VI of ‘Hermit Songs’ we find Heaney mourning the death of old writing practices:

‘Inkwell’ now as robbed of sense
as ‘inkhorn’:

That the literary institutions of today, among which one can include ‘poetry’ in its entirety, will eventually go the way of those belonging to monastic scholars is inescapably implied.

Heaney might have been wise to stick to his ‘Slack’ instincts and avoid the pitfalls of allegory. In ‘A Herbal’ the generalised connections made between collective plant and collective human behaviour are unconvincing and questionable. ‘Broom / is like the disregarded / and company for them/shows them / they have to keep going/ that the whole thing’s worth / the effort.’ This is the kind of sound bite that is bound to turn up sooner or later in Áras an Uachtaráin or the White House, or some other hall of hollow words, providing the elite with a literary fig leaf.

Fully attuned to language’s sonical properties, Heaney sometimes suffers a dismaying blindspot to the ideological ramifications of words and symbols. I confess to being repeatedly repulsed by the use of the word ‘mob’, perhaps the world’s most loaded term, to describe the crowd of famished and desperate human beings queuing for aid under armed threat in ‘Human Chain’. ‘The Mite Box,’ a poem that eulogises petty alms-giving, one the most patronising aspects of the West’s relationship to the developing world it oppresses, is indicative of a remarkably uncritical attitude to the institutions and practices of the Catholic Church. In the present context, this strikes one as both aloof and absurd.

All of the generative ambiguity that I have mapped out in Human Chain can perhaps be better understood as incidents within a larger conflict taking place in the conceptual background of the book, as well as in culture generally, between what one might broadly call the Platonic/idealist and the Heraclitean/materialist conceptions of life and art. For most of his career Heaney has undoubtedly been a Platonist, working towards the canon, ambitious—and deserving—of a place in the imagined Byzantium of pure form, the eternal ever-present of posterity, the gilded afterlife of artists. Now, ‘as I age and blank’, the reality of encroaching oblivion is dissolving all these artistic Shangri-las, releasing Heaney‘s poetry into the metamorphic flow of material time. Not only life, but also art, no matter how well-established or perfectly rendered, can be forgotten, and if not forgotten, at least historically transformed. It is not angels or ghosts but historical beings who encounter art and engage with it, and their minds are always changing, along with their evolving tongues and hermeneutic frameworks. Heaney’s work, like anyone else’s, will eventually carry forth little or none of its original intentions and meanings. The stroke-inspired urgency of facing up to this universal sentence of death produces both the dread and the exhilaration that are the twin and inextricable dynamos of this powerful and intriguing book.

Dave Lordan is an Irish poet working in text, performance, video, audio, and community creativity, inspired by oral and singer-songwriter traditions and by resistance to empire, capital, and human domestication.