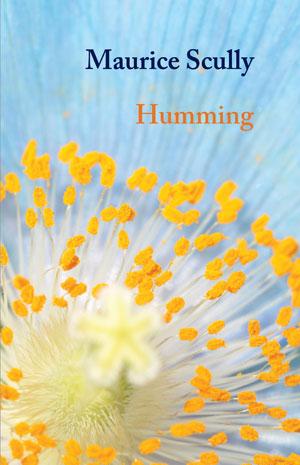 Maurice Scully has been working outside the Irish lyric tradition for nearly thirty years now. His latest full-length book of new work since Things That Happen (1981-2006) is Humming, a body of poems which immerse themselves in the daring process of notating the mind at work, at play, and registering the idle moments of consciousness and of being in the world.

The poems in Humming act, on one level, as a sound-scape, the leitmotif of ‘humming’ ringing throughout:

Teach is teach in Irish
& Irish is an adjective (too) in English
in whose house the messenger
arrives to say: (drop)
it’s summer: wake up.
Flood cells with brood-food
or lose all the larvae now!
The messenger is here. A dish of syrup.
Múin é. No í.
—‘Song’

A regulated metre is jettisoned for a varying cadenced register of notes. It’s not so much Williams’ ‘variable foot’ as Scully’s ‘wrack-line’, as I would put it, when poetry has reached the end of its own line, the end of its tether even. Its anchors, or the conventional ones anyway, have given way, or been dismantled, or ignored and the line becomes unhinged and therefore open to all manner of new discoveries and revelations:

But wait! It’s the middle of the night & time to wake up
I mean the middle of yr life & further along the ledge
past the diggers & set foundations parent birds attack.
You will discover starfish ingesting molluscs & ugly
dishonesties between people. You will have been a poet. Why?
—‘Ballad’

The line is a questioned entity in Scully’s work, a suspicious unit in the make-up of a poem. In this sense, Scully displays what the American poet Tony Hoagland has described, with a new wave of US poets in mind, as a ‘pervasive sense of the inadequacy or exhaustion of all modes other than the associative.’ Fair enough, but Scully has been plying his methods here for the last thirty years. The book is dedicated, after the ‘Coda,’ another reversal, to his brother. It’s interesting, and ironic when thinking of Humming as an elegy and ‘wrack-lined’ poem, to remember that the original ‘classical’ elegies were poems of a specific poetic metre. The elegiac note is not a mournful one though, for the most part, but a celebratory one, so that when the gesture of tribute does enter the poem it is subtle, tender, unexpected:

would have been a beautiful mixture of white,
yellow & blue with a deep green bedding on which
the body could have been laid.
—‘Snow’

In unison, or ‘uni-song,‘ with this sometimes rhapsodic, Beckettian, obsessive music, the poems work on another level, a typographical one, where the poem itself becomes an object, made up of brush strokes on the canvas of the page. There are ellipses, dashes, numbers, spaces, shapes, italics, indentations, all collaborating on creating a visual artefact as well as an aural one. Sometimes the words on the page sit side by side inviting a simultaneous reading. On the first page of the collection, for example, in ‘Sonnet Song’ we’re told ‘(one little thought experiment deserves another)’. It’s a characteristic and playful parenthetical interjection. If Tony Harrison’s heart beats iambically, as he once admitted, then Maurice Scully’s skips and jitters. But he doesn’t just write with the heart, but with the attentive mind of someone willing to trace each thought, sometimes whimsical, sometimes factual, sometimes peripheral. It’s a democratic-looking affair. When I read his work, I think of Jackson Pollock’s painting process. When Pollock talked about his painting not coming from the easel and preferring to tack the unstretched canvas to the hard wall or the floor because he needed ‘the resistance of a hard surface,’ I think too of Scully’s sonnets which are a mischievous evolution of the traditional form:

some paper space time’s table dissolved
snow melting from an eave can that be birdsong?

As Jackson Pollock tacks the canvas to the hard wall, Maurice Scully tacks the poem to the hard surface of the wor(l)d. Pollock said, ‘On the floor I am more at ease. I feel nearer, more part of the painting, since this way I can walk around it, work from the four sides and literally be in the painting.’ This is what a Scully poem is like and you as the reader can walk ‘around it’ and literally ‘be in’ the poem. The poem’s borders are permeable, its stanzas are not secure walls, but wracked buildings where we can come and go. While Imagist poets like Williams once announced that anything was available for the subject of the poem, Scully turns the paradigm on its head. The poem becomes less about subject matter, or what the poem is ‘about’, and more an occasion or experience in itself:

change gear &]
hum numbers to the edge out
the impossible, but don’t forget: you’re next.
Goodnight.

It is a poetry that is playful, irreverent, skittish, rhapsodic and paratactic all at the same time. The modernist tag Scully has been given along the way seems a little outdated and out-modish even. At least that’s how it feels now. Better the elliptical description of Hoagland’s where narrative is eschewed for real cultural reasons, an aversion to authoritarianism, closure, progress even and demonstrating a poetry equal to the ‘speed and disruption’ within culture. While at one moment the Arts Council is derided in ‘Ballad,’ in another moment a ‘Neanderthal burial site’ is found, 60,000 years old, where ‘flowers are known to have been used in a funeral ceremony’ for the first time.

It may be difficult to assess how Scully’s work has evolved over the years. The Dedalus Press’s Primer in 2006 went some way to doing that, but as one self-contained ‘project’ Humming stands out in Scully’s oeuvre, making it somewhat surprising that by late in 2010, more than a year after the book’s publication, not to mention its absence from any short lists, prizes or honourable mentions, this review appears to be the first attention given to it. Among the saturated short narrative and straight lyric pages of Irish poetry, Humming represents a considerable and significant change. For all these reasons, I read Humming as a major work by a poet who has for long worked on the peripheries, but whose working aesthetic becomes more urgent, more necessary and more relevant to the rest of our lives.

The Woman In The Port