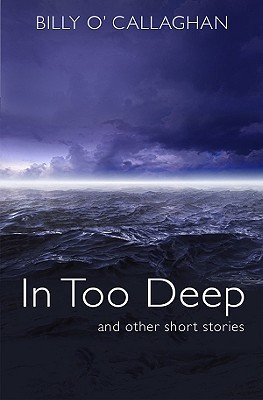 IN BILLY O’CALLAGHAN’S SECOND short story collection, In Too Deep, diverse human relationships are explored through concise, elegant prose. It’s clear from the twenty narratives in this collection that O’Callaghan is a master storyteller, who with only a few strokes can capture the essence of his peculiar characters as they drift through worlds that are as rich and compelling as they are bleak and full of longing.

These stories are for the most part flawlessly character-driven with very little trace of the author, similar to L’Étranger by Albert Camus, in how it sometimes reads like an unintentional confession. And like Camus’ protagonist, Meursault, O’Callaghan’s characters’ seemingly simple and spontaneous impulses within a disconnected world compel us to believe in them, for better or worse. For these are characters penned with such alacrity that it can take only a paragraph for the reader to be so absorbed that finishing a story is accompanied by a vague sense of abandonment—which ironically is often how these characters feel about their own worlds.

While the subject matter of O’Callaghan’s stories verges on the gruesome and the menacing, the experience of reading them is sensual and hypnotic, similar to the experience of reading certain works by Samuel Beckett or Harold Pinter who were able to conjure silence and mood through language. O’Callaghan’s characters are often outsiders, loners or drifters, but are at the same time tender, forgiving, and spiritual without being ideological; they find beauty and meaning in nothingness.

She remains stubbornly real in my mind, and yet I can’t help but feel a whisper of doubt. Ghosts are real, too, and dreams, but real in different ways. My lowest ebb comes when, overwhelmed by loneliness and desperation, I reach for the telephone book and call up the first person I find that matches her name, and while listening to the line buzzing with the anticipation of my call I squeeze my eyes shut, because miracles feel more conducive to such a darkness… All my hopes are pinned now on next month. The day is circled on my calendar, and I’ve planned exactly how I will recreate that first meeting.
—‘Love Sick’

One striking feature of this book is that it seems to drift between genres, but this is not disconcerting because O’Callaghan’s characters are often related in more profound ways. ‘Syzygy’ tells the story of a break-up, where the one left behind is somehow renewed by his quiet passion for a cosmic event that language has glaringly failed.

I had no idea what such a word actually meant, but standing in my yard, feeling the mystery of the day unfold around me, I found myself speaking it aloud over and over and delighted in its buzzing cadence and jagged lack of vowels. ‘Eclipse’ explained what was happening but ‘Syzygy’ went closer to truly defining this imminent celestial alchemy. I savoured the word and sang it in between long whistling breaths, until a little after half past two, at which point the thin darkness of a false night had more fully fallen.

O’Callaghan flexes his literary muscle with the grace of a dancer. However, in ‘The Cost of Living,’ written in the genre of true crime fiction, the author is clearly enjoying a suspenseful build up to the surprisingly well-conceived finale.

‘Murder is such an ugly word. I prefer to think of it as business. I’m a problem-solver. People come to me with a problem and I try to help out, if I’m in a position to do so and if the monetary compensation strikes me as acceptable. But I’m not in this business to get caught. I don’t gamble, I only play the safe odds.’
God, she was something. You know the type: early thirties, tall and slim, but not skin and bone, with eyes the subtle blue of smoke…

One of the most masterful stories in the book is ‘Little Indignities,’ which follows the lives of a small-town couple. The husband of the pair is extraordinarily violent, and savagely beats his wife regularly—that is until a stroke leaves him paralysed and utterly at her mercy. The way this woman copes with her new responsibility and freedom is a brilliant and profound exploration of human nature.

O’Callaghan is the sort of writer who places a heavy significance on the surreal and mythic power of everyday occurrences—which makes the world outside these stories somehow seem more vivid; a place where diverse, strange, bleak and beautiful events are all taking place, with elegant simultaneousness. That’s what makes this book such a pleasure, and confirms O’Callaghan as a true master of the short story genre.

Simon Van Booy is the author of The Secret Lives of People in Love and Love Begins in Winter, which in 2009 won the Frank O'Connor International Short Story Award. His essays have been published in the New York Times, the New York Post and The Guardian. His books have been translated into eight languages.

It Could Be You