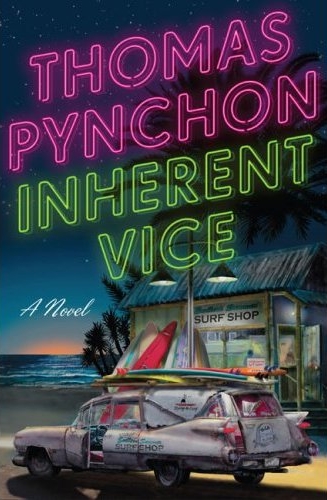 The work of Thomas Pynchon, his name, his famous reclusiveness is bound up with the wave of postmodernist aesthetics which broke across America in the 1970s wiping out the agonies of modernist poetics, well, in the universities anyway. Gravity’s Rainbow (1974) over 750 pages of mind-bending alternative metaphysics rubs your nose in the malevolent corporate links between the Nazi war machine and post-Watergate America while more recently, Against the Day (2006) is a labyrinth of half-forgotten and possibly pseudo pulp-genres which, over 1,000 pages long, might be about the extinction of the anarchist movement. On the other hand you might recognise the Pynchon name with his ‘appearances’ on a number of episodes of ‘The Simpsons’ with a paper bag over his head. So is he just shy or are they really out to get him?

Paranoia is one Pynchon’s big themes. In a chaotic world running out of steam and lies, the paranoid, like the reader, is the only one who still finds patterns of meaning. The plots of fiction are themselves embarrassing anxiety attacks. Humanity is a paranoid phantasy. History is a conspiracy. Knowledge is fleeting moments of vast vertiginous insight into—no, it can’t be, it can’t be! In this new book, Inherent Vice, labelled by critics as reader-friendly and Pynchon Lite, the writer has found his ideal paranoid in the stoned hippy private eye, Doc Sportello, of LSD Investigations— ‘Location, Surveillance, Detection.’

On one level the book is a homage to the urban noir tradition of Hammett and Chandler with a psychedelic twist. Doc lives contented among his own sort in the fictional Gordita Beach area of L.A., a haven for hippies, surfheads, dropouts, stoners, a communal paradise:

Sometimes in the shadows the view would light up, usually when he was smoking weed, as if the contrast knob of Creation had been messed with just enough to give everything an underglow, a luminous edge, and promise that the night was about to turn epic.

It’s the last days of the Summer of Love, 1970, Nixon’s in the White House and Reagan’s the governor of California. In classic style, the books opens with a simple request by Doc’s old flame, Shasta, a hippy-on-the-turn, ‘looking just like she swore she’d never look.’ Shasta wants Doc’s help to save her new boyfriend, Wolfmann, a filthy rich real-estate developer from an unlikely plot by his ‘English rose’ of a wife and her own lover, Riggs Warbling, to kidnap the developer, drug him and have him committed to a nuthouse. Might this be nothing more than the inspired paranoia of the jilted lover, Doc wonders, but being the nice guy he is, as all gumshoes are condemned to be, he agrees. ‘Groovy,’ and off we go. Within a few pages, Doc goes in search of Wolfmann in a massage parlour called Chick Planet in a building site, gets a knock on the head and awakes to find Wolfmann has been kidnapped by a gang of Nazis on motorbikes, that the developer’s bodyguard is dead and Doc is in the frame for the murder. Enter the cops in the shape of Bigfoot Bjornsen who detests all hippyfreak scum. Bummer, as Doc would say.

And so the fun begins… Shasta disappears, another woman wants his help looking for a sax player in a surfer band who OD’d on heroin, he discovers a selection of ties, each with a hand-painted image of a different nude young woman on it, he is questioned by the FBI who are probably not as interested in black nationalists as they claim, he begins to hear rumours of an organisation called Golden Fang which might be the name of a yacht bringing in drugs or a tax dodge syndicate of dentists, he learns of the existence of an early form of the internet, he goes on a specially designed acid trip into the lost continent of Lemuria, heads for no good reason for the gambling dens of Las Vegas with an ambiguous love sick young woman called Trillium Fortnight, discovers the sax player is really a government triple agent, and that Golden Fang is much more than a private mental health facility, perhaps the very essence of freemarket capitalism, Shasta returns inexplicably after her brush with the ‘flatlander straights’ and pays his bill in her own style, undressing and crawling naked across the floor to suck on his toes: ‘Submissive, brain-washed, horny little teeners… who do exactly what you want before you even know what that is…Your kind of chick Doc. That’s the lowdown on you.’

The plot, despite the cliffhanger chapters, becomes increasingly confusing and irrelevant like the ramblings of a hashhead at dawn. Doc, after the shoot out, is landed with a major block of heroin in a cardboard box that once held a TV set. Stashing it in his friend Denis’s gaff, Doc comes back the next day to find Denis has taken the packaged gear out of the box and is sitting there engrossed, watching it. Doc asks him what’s on to which Denis replies, ‘See, my theory is, is it’s like one of these educational channels? Alittle slow maybe, but no worse than high school…’

The book is loaded with references to television sitcoms of the time, films, sport, surfer-lore, political corruption, music—Pynchon makes up his own song lyrics—and a cast of bummed out or evil characters with no claim to life beyond the page. The dialogue is crisp and well-rolled. But overhanging Gordita Beach is the shadow of the trial of Charlie Manson and the Helter-Skelter murders. The 60s have come to an end. A sadness begins to cloud the beach like the fog in L.A. Doc sees the kids in headphones outside a music store, listening to music in ‘solitude’ and fears the day people will ‘actually be spending money to listen to rock n roll.’ Something dark is on the horizon:

Was it possible, that at every gathering—concert, peace rally, love-in, be-in, freak-in… those dark crews had been busy all along, reclaiming the music, the resistance to power, the sexual desire from epic to everyday, all they could sweep up, FOR the ancient forces of greed and fear?

Don’t be mistaken; this ain’t no paean to lost hippy ideals by a writer now in his seventies. This is a grand slam literary joke with a bite, powered along by a loathing of the deceit and violence of global capitalism. Doc is the lone, hoarse, randy human voice trying to survive in an insidious bland consensus. In the last passage of the book, stuck on the motorway in a thick spectral fog reminiscent of the snow at the end of Joyce’s ‘The Dead,’ Doc is struck by how the drivers use their lights to work together in ‘a temporary commune’ to help each other through to safety. Perhaps this is a hint from Pynchon, a hope against hope, that the collective spirit will endure.

First Notes on a Connemara Poem