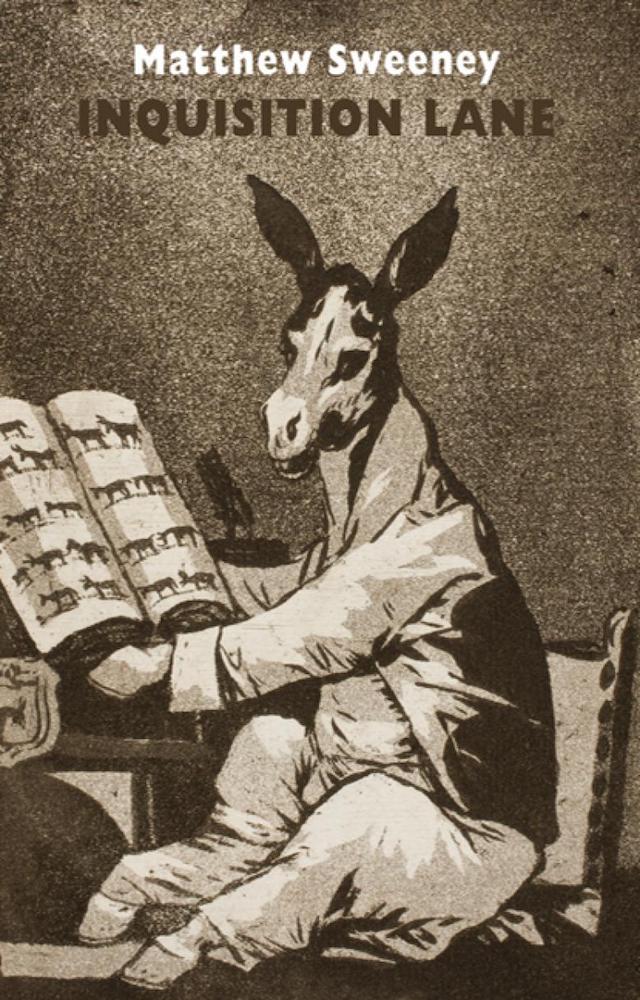 Earlier this year a train arrived at Cologne station and shattered the morning quiet. As it hauled in, its passengers threw up the windows and flung forth arms and smiles and children, crying out ‘Halli hallo! Halli hallo!‘ as though they were in a wartime film, when passengers could fling up the windows of trains, when someone might be waiting on the platform. Emerging from their antique compartments, from their war, these Syrians were ushered along by volunteers in yellow bibs. They paused only to shake hands or exchange smiles with us, the onlookers on the platform; one or two asked: ‘Now where are we? Where is this?’ We welcomed them confusedly, still half in our travel stupors, me with my shaky beginner’s German. The European passport seemed to glow in my bag: an embarrassed blush, a protective amulet.

I was on my way back to Germany from Ireland, and for reading matter I had Matthew Sweeney’s newest collection, Inquisition Lane. The putative subject of Inquisition Lane—if you read the blurb on the back—is death. And indeed the collection takes on death with black wit and poignancy:

I myself, he continued, know nothing about it,
beyond the fact it’s a clifftop, and we all must
take the bewildering step off the edge into space.

Stepping off the edge, the book plunges forth into encounters with ageing and death in all manner of manifestations—burying a cat, exchanging posthumous emails with Dennis O’Driscoll, dancing the stomp with a dead sister. The closing poem is an elegy for John Hartley Williams in which the speaker can’t help outliving his friend, now imprisoned by death, in pleasurable freedom: ‘I’m up in Donegal, where you never / visited, for whatever reason, and I’ve / eaten lambchops grilled pink…‘ Sweeney imagines bringing Williams back as a parrot whom he would keep as a pet. Not in a cage, he assures Williams—‘you’ll have the run of the house.’ Alongside this marvellous run of elegies, there is a thread of protestation moving in its simplicity and directness: ‘Let me make this clear, I don’t want to / get old.’

The only problem is that it’s hard to believe in Sweeney’s poetic persona as being subject to natural law. Poking into igloos and ice factories, going to races that don’t exist, the Sweeney of Sweeney’s poems never seems bound by mortality or by anything else. His persona is the ultimate flâneur. Houses in his poems are always dream houses. Poems abandon us mid-narrative. Ghosts walk through walls. And in any case I begin to feel, as I read and re-read, that death isn’t truly the subject of Inquisition Lane—or only insofar as death is another kind of border crossing, in a version of the human experience that is all about the borders we can and can’t cross.

Sweeney’s peripatetic poetry reflects his real-life peripatetic lifestyle. This collection is no exception, taking in Cork and New York, real life and imaginary, Spain, France and Germany. And it is in part his well-travelled imagination that makes Sweeney worth reading. His formation is steeped in German literature: in interviews he traces a line through Buchner, Kleist, Trakl, Kafka, Grass and Böll which loops back to Irish writing via ‘European darkness‘. This roundabout approach to Irish poetry has enabled him to evade to some degree, as Patrick Cotter has observed, ‘the main Irish tradition and the Northern Irish “well-made poem“ style.’

But in this, Sweeney’s eleventh collection, the poetry’s sheer mobility becomes troubling. ‘New York‘ recounts an experience of tourism, apparently to comment on brands of freedom. With a light touch, it takes us to sights associated with artistic rebellion: Lou Reed’s ghost, MOMA, Bleecker Street, Dylan’s old flat, the Chelsea Hotel. At Washington Street, our speaker observes a dog run, where dogs are briefly ‘set free’—a freedom as brief and limited as that given, elsewhere in the book, to Williams in his parrot afterlife. The analogy might be with the artist, who wins some brief and limited freedom only in a poem, painting or song; or it might be with all of us, who enjoy brief, limited freedoms under capitalism. Throughout the poem, commercial transactions take place and are lovingly catalogued. Our speaker eats ‘designer pasta‘, ‘goat’s-milk yoghurt’, monkfish and slow-roasted pork. ‘New York’ ends at the airport with a procession of personal possessions:

In JFK’s Security, where the
black guys in uniform made me
laugh, I launched five plastic
trays through the screener—
one with my boots, one my
belt and jacket, and bag of
little bottles, one my new
mini iPad, the last two with
my rucksacks, big and small.

We might read the ‘laugh‘ here in different ways. The surface reading is that the ‘black guys’ said or did something witty—literally made the speaker laugh. But ‘black guys in uniform‘ are also, the poem might suggest, a laughable absurdity in a country where ‘black guys’ are systematically oppressed and disproportionately imprisoned. The sight of them compounds and makes hilarious the already surreal experience of airport security. Any ‘laugh’, meanwhile, is a kind of freedom—as elsewhere in the poetry where, by making us laugh at their sheer absurdity, the poems refuse to be reduced to easily explicable commodities. But this laugh is also an act of complicity—after visiting shrines to so many artistic rebels, the poet now bows cheerfully before an oppressive state and an economic system obsessed with possessions and commodities. Our speaker, as if naturally, passes through this border check unchecked.

In Inquisition Lane’s title poem, the speaker walks down an actual Inquisition Lane as though in search of inquisition. Enjoying red wine and chicken instead, he celebrates or laments the fortunes of history—the deadpan narration won’t let us know which:

No one had tortured me for my lack of faith
in the gilted Madonna or the cross-carrying Christ.
No one was going to throw me in the river,
minus my thumbs, fingers or testicles.

The poem culminates in a fantasy wherein one of Sweeney’s many dream houses materialises—this time, an ‘Inquisition Castle’—and the poet disappears into its darkness, presumably to be satisfyingly tortured after all.

What are we to make of this? A craving for persecution from an Irish poet who—beginning from such a position of privilege (in possession of a European passport)—yearns to climb down out of privilege and be one of the righteously persecuted again? Or something else? The more I read the less I’m sure, because Sweeney’s poems persistently muddle the reader’s sense of the relationship between the poem and the world. ‘The Crow’ enacts a parable of justice so poetic it can only suggest the non-existence of comparable justice in the real world. ‘Trainsong’ is a take on the sestina which, denied an envoi, is perfectly circular. It mirrors the experience of staring stupidly out a train window at a repetitive countryside. A parody of closed form, it implicates the poet in its own sheer pointless perfection, self-consciously cut off from the world.

At other times, Sweeney’s poems are perceptive and humane. ‘Elegy for the Moonman’, addressed to Neil Armstrong, offers a moving instance of boundedness in the moon man who can never return to the moon:

You ordered another gin, got me
a second water, then darkened
and said The moon fucked me up
it fucked up all of us who walked
on it, looking back at that blue ball.
How do you think it feels to be so
far away? When I got home I wanted
to return there, but I knew I never
would.

This is tender, and that double ‘fucked’ makes it fierce. It asks us to acknowledge that there are experiences with which we cannot sympathise, sadnesses we cannot reach, people with whom we may not presume to identify—though we might shake their hand. It is one among the many insights and pleasures of Sweeney’s oblique little lyric inventions in Inquisition Lane.