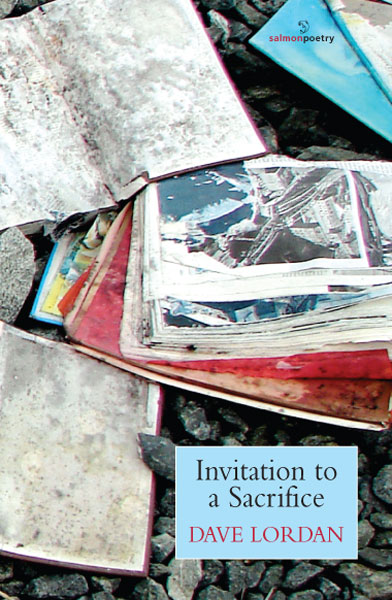 Invitation to a Sacrifice

William Wall tells us, ‘Lordan is the poetic voice that Ireland needs and he arrives exactly upon his hour,’ and Lordan’s first collection, The Boy in The Ring, proved this statement true. In 2007 Lordan stepped centre stage with an unbending honesty that shook up the settled scene. Since then he has straddled the worlds of literary and performance poetry, pushing at the boundaries of each to claim a territory all his own. Largely hailed as a political poet, it is Lordan’s inimical ability to fuse together contradictory forces that makes him so necessary as a writer. In The Boy in the Ring poems like ‘Explanations of War,’ ‘Driving Home from Derry, Feb 3rd 2002,’ and the enduringly powerful ‘Cureheads’ gave us the depths of depression and conflict, only to rush back at us with equal measure of redemption. This quintessential fusion of violence and tenderness became the abiding note of Lordan’s first collection, a book that balanced its furious energies to earn him rightful praise, a clutch of awards and a loyal following.

In the ensuing three years the world has changed. Though there are a number of poems here that maintain that earlier, redemptive note, Invitation to a Sacrifice moves in step with Irish society to make for a grimly topical read. Lordan still displays old strengths, his gifts for narration and chilling detail dovetail in many poems and particularly effectively in ‘Somebody’s got to do Something,’ an account of ringing the police to report an abusive neighbour threatening the woman in the flat below. Only when ‘yer man is losin the momentum,’ do the guards arrive and start laying into our hero, ‘Rodney King style.’ Political comment is everywhere, and ‘Gaff,’ one of the collection’s most successful poems, multi-tasks. Ostensibly about the mistreatment of Dublin immigrants, it deftly shifts focus to include a wider disenfranchised community: ‘The nose is a merciful beast; how else could anyone keep//down their food when, they, like, live in a dump, or sewer, or trench?’ ‘Gaff’ does what Lordan does best, cleanly presenting the damning facts, only to end with the disarmingly lovely lines, and pure poetry of ‘Were they too proud to cry? Did they shake? Did colour drain/out through the cracks in their skin the way water is parched from a lake?’

Lordan has a refreshing ability to conjoin wit and wisdom. In ‘The Last Cathedral’ he describes ‘the two last remaining/and practically endless parts of the world,/the practically endless city and the practically endless desert,’ and, even more memorably, how in the city there are more people than ‘there are possible faces and poses and expressions/and even actions to go around.’ Humour is the spoonful of sugar that helps the medicine of Lordan’s political vim go down, and its lighter moments are engagingly profound.

For all his infamous ire, Lordan’s real gift has always been a gracefulness of phrase combined with a delicate sense of timing. In ‘Dublin Spire,’ the ‘cold steel colossus softens at dusk’ to set alight its ‘tapering lure/reel in the falling stars,’ while in ‘Funeral City Passeggiata’ dead teenagers, ‘neck and pair off/in the archways. Such choreography.’

Small shards of a lingering romantic idealism filter into a number of poems. In ‘Dominic Street, A Recipe’ Lordan writes ‘To make a beach where there is only worn out grass’, ‘you need yourself/still wet with the belief/that beyond the light splintering on broken grass/and beneath the busted footpaths/there are seabirds,/ ocean,/dolphins,/sand.’ These sympathetic impulses combine in two of the collections most enduring poems, ‘Invisible Horses’ and ‘Imbiancata’:

But poems like, ‘Imbiancata’ and ‘(Mall Stowaway),’ where Lordan speaks for a ‘solitary unicorn/who has snuck onto the ark,’ are a fragile presence. Turning the book’s pages we wander deeper into an exhibition of dark canvases, disturbing portraits glare out at us, studies that archaeologise piss-heads, sewage, child sex abuse, brutality, death within life, the recession and the recession again. As Lordan’s allegiance veers toward his performance audience, his poetic language tends to dull. The wonderful ‘spitting hubris and hexing tongue,’ the ‘vertiginous cliffs of sheer despair’ that we meet in ‘Bullies’ are surrendered to an uneasy combination of the crucial, the brutal and the profane: in ‘The Heckler’ ‘The bankers have squandered the peace and run off./All the rest of us can go to fuck.’ The gleam rubs off Lordan’s pearls of wisdom as they rub against the more inane material: in ‘A Resurrection in Charlesland’ we’re warned ‘when all the Chalkdust Charlie’s been metabolised/and flushed away to stupefy the riverfish//eventually//them gang solicitors will/I sweat to God/levitate butt-first/and be whooshed off/in a UFO.’ Lordan’s powers falter as his moments of subtlety and poise are compromised in the fall-out from weaker ideas or lines such as ‘and TOMORROW STINKS TOMORROW STINKS/TOMORROW STINKS TOMORROW STINKS.’

A flood of tirade and rhetorical complaint sweep up the collection’s more inspired images. The ivory stadium in ‘The Last Cathedral,’ which at night shines automatically and ‘looks like a kind of Ayer’s Rock made out of luminous fibre-glass/an interstellar Pegasus half-way through forming itself/out of lightning and chalk,’ is reduced to flotsam on the tide of ‘tar and oil and dried-out shite/and blood’ detailed in ‘The Heckler.’ And the skinny brothers and sisters in ‘Invisible Horses,’ who Lordan beautifully depicts as ‘medieval stragglers,/strung out beggars going village to village/on a rope,//each one of them a suffering bead/on a barbed wire rosary,‘ are too easily erased by more belligerent images like the ‘arse-wiping section of the Southern Star’ in ‘Sewage.’

In an interview with Adam Wyeth, Lordan stated that performance poets ‘are artists and sometimes an artist has to upset, annoy or even disgust their audience.’ Invitation to a Sacrifice ticks all boxes; pages of shock and tell mount up. Delicious light wit darkens to relentless black, ushering in a grubby sexuality that is laddish and alienating. In ‘Surviving the Recession’ Lordan riffs around the ‘onionist’s cookbook’ and the ‘onanist’s cockbook,’ telling us not to ‘confuse the two. Don’t cook your cock/or slide a spring onion up your buttered arse, expecting/a burst of colonial joy.’

‘C-Section’ is one piece within a group of works entitled ‘The Methods of the Enlightenment.’ Part prose poems, part short fiction, they are best described as fantastical quasi-parallels. Early on in the collection, fantasy was a seductive presence at its most alluring in ‘Invisible Horses’ where: ‘The invisible horse I liked/to see you on the most/was a mare of 16 hands/with a hide river-brown and/dappled white and shimmering/as the Blackwater does/while it canters past/with the sunlight/coming down.’ But in ‘The Methods of Enlightenment’ fantasy gears up several notches. The pieces are occasionally riveted to the page by moments of startling clarity, but they generally ride the merry-go-round of Lordan’s imagination like annotated acid-trips that mock us all.

Whereas The Boy in the Ring was a well-balanced read that tempered extremities, Invitation to a Sacrifice is decidedly off-kilter. In ‘C-Section’ Lordan boasts ‘I can be a very bad bastard at times. I need to be to get my point across,’ and it is Bad-Bastard who takes the lead role, stamping heavy-fisted through the collection, flashing the book’s epigraph—Patrick Kavanagh’s ‘no truth oppresses’—like a justifying badge. Poetic craft becomes a much put-upon sidekick whose sound advice Lordan ignores on rather too many occasions, so that the mystery of political poetry ultimately remains unsolved.

Grace Wells was our Featured Poet in Issue 10 Volume Two, Summer 2008. Her debut collection, When God Has Been Called Away to Greater Things (Dedalus Press, 2010), won the Rupert and Eithne Strong Award and was shortlisted for the London Festival Fringe New Poetry Award.

About Visions and Voices

Back When We Talked to the Dead