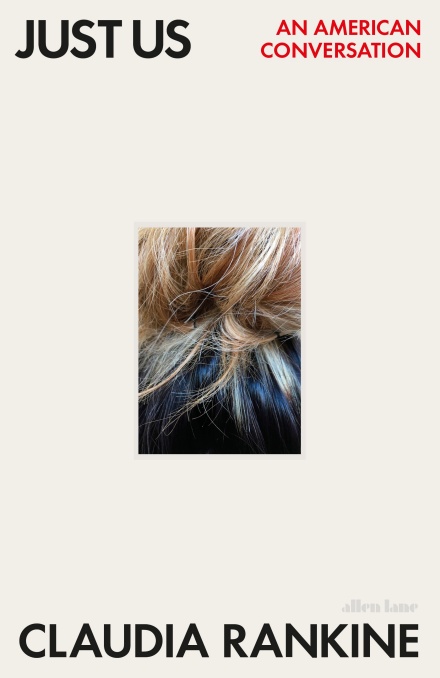 Just Us: An American Conversation

Claudia Rankine’s Just Us: An American Conversation reads predominately as a book of essays, in contrast to her groundbreaking Citizen: An American Lyric, a book-length poem which harnesses hybrid forms such as the lyric essay. The few poems interspersed throughout Just Us display Rankine’s ability to interrogate the fact of white supremacy with intellectual and emotional acuity:

White is living within brick-and-mortar, walling off
all others’ loss, exhaustion, aggrieved
exposure, dispossessed despair –

in daylight white hardens its features.

Towards the middle of the book, the reader encounters an erasure poem in which the redacted text is whitened to reveal an instance of white denial, leaving behind words in black such as “I am not / the whiteness / I imagine.” Structurally speaking, the scant presence of these poems feels too tenuous to achieve a more purposeful effect on the reader. Furthermore, Rankine’s brilliant use of the second-person “you” in Citizen – which implicates the reader in a complex constellation of racial configurations and refuses the whiteness inherent in the lyric “I” – is replaced in Just Us with a first-person narrative that, despite its clarity, intimacy and rigour, feels less compelling than Citizen or its predecessor, Don’t Let Me Be Lonely. Keen readers of Rankine’s work will recognise her signature intertextual approach as she pairs her interrogations and observations with additional commentary on the verso pages, comprising visual art, photography, tweets, Facebook posts as well as academic and journalistic sources which offer verification on her claims. While this approach is laudable for its polyphonic effects, some of the “fact-checks” come across as rather self-consciously performed, as if in anticipation of a skeptical (white) reader who might query the veracity of Rankine’s statements at every turn. This pre-emptive gesture is telling of inter-racial relations in the US and elsewhere, but may also unwittingly distract the reader’s attention from the central arguments being made on the recto pages.

In 2014, Citizen offered readers a relentless catalogue of microaggressions experienced by black Americans alongside vital depictions of racial injustice and police brutality in the US. In 2020, Just Us seeks to interrogate the flip side of that same coin as Rankine turns her attention to the values, ideas and beliefs that underpin white privilege and white supremacy. To that end, she offers a methodical examination of conversations she initiates with white Americans, either one-to-one, or as part of a group. At the start of the book, she hones in on her conversations with white men, since “they seemed… to make up the largest percentage of business travelers in the liminal spaces where we waited”. In the wake of these random encounters, she offers anecdotes which illustrate white privilege in action: “He told me his son wanted to go [to Yale] but hadn’t been accepted during the early-application process. ‘It’s tough when you can’t play the diversity card,’ he added.” Remarking on this casually racist comment, Rankine muses: “Was this the innocence of white privilege?” Resisting the urge to exit the conversation, she decides to press this stranger further: “I’ve been thinking about white male privilege, and I wonder if you think about yours or your son’s?” The response she receives is perhaps not unanticipated: “‘Not me,’ he said. ‘I’ve worked hard for everything I have.’”

These moments of recalled dialogue are often startling for their candour and depth, since white men are rarely invited to examine their multiple privileges. Rankine’s brilliance lies in her ability to hone in on seemingly casual responses to her careful questions, thereby unearthing the toxic and racist assumptions that fuel America’s structural violence towards people of colour, and black people in particular. The main premise of Just Us is that conversations matter, even during a time of national emergency. Towards the conclusion of the book, Rankine observes: “A friend finished reading the final pages of Just Us and said flatly, there’s no strategy here. No? I asked. Her impatience had to do with a desire for a certain type of action. How to tell her, response is my strategy. Endless responses and study and adjustments and compromises become a life.” In the wake of the murders of Ahmaud Arbery, George Floyd, Breonna Taylor, Tony McDade, David McAtee and other black victims of police brutality in the US, some American critics have responded to Just Us with questions as to whether Rankine’s proposed strategy remains sufficient as a form of anti-racist discourse. Writing for The Atlantic, Ismail Muhammad observes that “the very idea that drives Just Us forward – the notion that racial inequality can be challenged by fostering social intimacy and uncovering the reality of white privilege – risks seeming somewhat regressive. Why should one care about audience responses to a Black playwright’s breaking of the fourth wall, for example, or about arguments over Trump’s racism at a well-heeled dinner party?” Indeed, is it enough to be having challenging conversations with white people about white privilege, when black people and queer people of color are still dying at the hands of transphobes and white supremacists?

One might recall Reni Eddo-Lodge’s argument in Why I’m No Longer Talking to White People About Race: “I can no longer have this conversation [with white people], because we’re often coming at it from completely different places. I can’t have a conversation with them about the details of a problem if they don’t even recognize that the problem exists. Worse still is the white person who might be willing to entertain the possibility of said racism, but who thinks we enter this conversation as equals. We don’t.” This observation by Eddo-Lodge is relevant when one considers a conversation that Rankine recalls having with her husband John Lucas, a documentary filmmaker whose life’s work testifies to his being a staunch anti-racist ally. However, when he responds to Rankine’s observations of racist men by deploying terms like “defensive” and “white fragility”, Rankine is forced to recognise how Lucas’s whiteness allows him to “[join] all the ‘woke’ white men who set their privilege outside themselves… never mind that that capacity to set himself outside the pattern of white male dominance is the privilege.” If white privilege means that one party always comes to the table with the upper hand, then is there a point to initiating such attempts at mutual understanding? Rankine’s answer is an unequivocal yes. In the section titled “social contract”, she discusses being at a dinner party where her views on the 2016 presidential election are dismissed repeatedly, particularly when Rankine notes the undeniable role that racism and white supremacy played in Trump’s election. Despite her frustration, she observes: “I learned early that being right pales next to staying in the room.” However, she soon acknowledges the futility of her efforts when “a white woman effectively ends the conversation…by turning our gaze toward the dessert tray. […] It is so blatant a redirect I can’t help but ask the most obvious question: Am I being silenced?”

As one might expect, the table of predominately white guests do not answer. Instead, they steer the conversation elsewhere. Rankine ponders leaving the table, but ultimately decides against it. She writes: “Knowing that my silence is active in the room, I stay silent because I want to make a point of that silence.” There is an admirable insistence throughout Just Us on the need to persist in these encounters, despite the risk of being seen as the source of trouble, as Sara Ahmed observes: “To speak out of anger as a woman of color is then to confirm your position as the cause of tension; your anger is what threatens the social bond… the exposure of violence becomes the origin of violence. The woman of color must let go of her anger for the white woman to move on.” I wonder whether Rankine’s strategy of “staying in the room” is only feasible for some people of colour – especially those with class privileges and ample cultural capital – in order for one’s silence in the room to have any weight. In the case of Rankine as esteemed poet, essayist, playwright, editor and professor at Yale University, one might imagine that her disapproval may linger in the aforementioned room in ways that another black person’s silence might not.

During a time when public protest appears to be the preferred strategy for most in reaction to racist state policies in the wake of the Black Lives Matter movement, Rankine’s desire for introspection and dialogue may prove challenging for some. For others, Just Us draws crucial attention to how language remains a way to refuse “the rage that cancels complexity”. In this ambitious, compassionate and self-reflexive book, Rankine demonstrates how “remaining in the quotidian of disturbance” – staying with the inevitable flux of a conversation – is a way of playing “the long game” in societies where racism remains entrenched. Following one of the most acrimonious elections in American history, President-elect Joe Biden thanked African-American voters in particular for standing with him in his victory speech. Despite this momentous shift towards a more liberal and compassionate presidency, racial justice may only be attainable if the fact of “universalized whiteness” is seen as the structural barrier to racial equality, and as a “racial imaginary” which continues to cost lives.

Mary Jean Chan is the author of Flèche, published by Faber & Faber (2019). Flèche won the 2019 Costa Book Award for Poetry and was shortlisted for the International Dylan Thomas Prize, the John Pollard Foundation International Poetry Prize and the Seamus Heaney Centre First Collection Poetry Prize. Her reviews have appeared in The Guardian, with criticism published in The Journal of American Studies (2018) and The Journal of British and Irish Innovative Poetry (2020). In Spring 2020, Chan served as guest co-editor alongside Will Harris at The Poetry Review. Born and raised in Hong Kong, Chan lives in London and is Senior Lecturer in Creative Writing (Poetry) at Oxford Brookes University.

Benedict and the Lost and Found