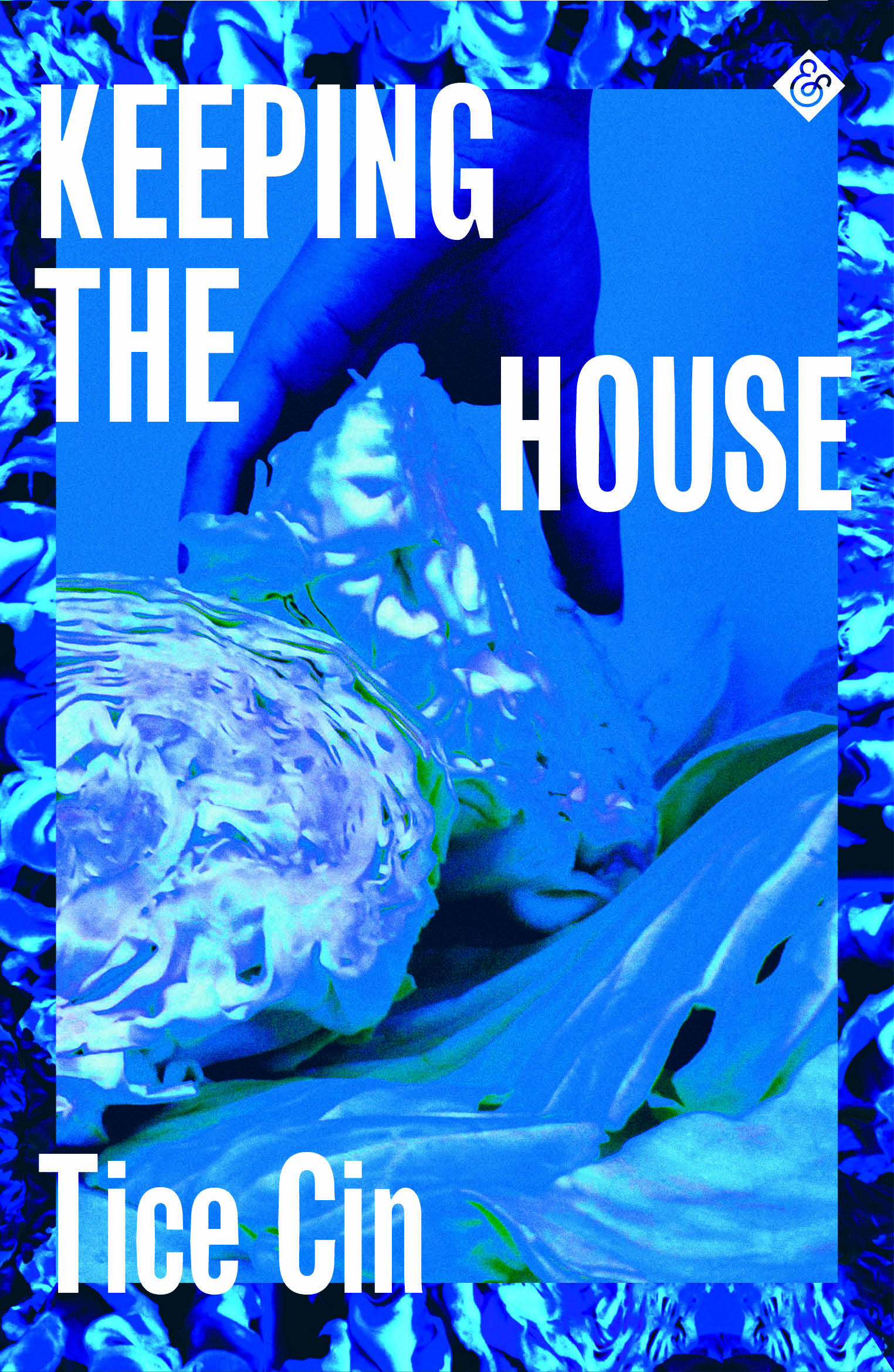 What pleases me most about messy, polyphonic novels is that sense of their being wilfully transgressive, even when they don’t deal in transgressive themes. This comes across in a kind of anarchy, a thumbed nose to the idea that the transaction between reader and author must be respected throughout (that the author should leave room for the reader, and shouldn’t make the reader work too hard). When the author employs many shifting perspectives, the reader is asked to concentrate from the first page, but in a sense also just to go with it, trust in the author’s skill, ask little of the cacophony. Like arriving at a gathering late to find a group of animated strangers most of the way through a loud argument, you just have to trust that someone will eventually draw breath and give you some context. I find this lack of writerly manners exhilarating.

This is the case with multidisciplinary artist Tice Cin’s wonderful debut novel, Keeping the House. It’s not only transgressive in terms of its breaking the formal rules of prose; it’s about heroin smugglers with little to no interest in the societal implications of heroin smuggling. Ostensibly a caper about importing the stuff from Turkey to the UK inside cabbages—at least that’s what it suggests on the back—this is a novel about so much more, and Cin is happy to make the reader’s head spin. The players are members of the Turkish Cypriot community in London: crime bosses, cashiers who can kick down doors, goons with problem children, spectacular cooks bonding over stained Tupperware, latchkey kids, sword-fanciers. They can be pragmatic, devious, evasive or cold, and Cin has mighty affection for all of them. Much of the action takes place in Tottenham. Much of the cast wears slippers.

There is a directory of characters and their quirks at the beginning of Keeping the House, an indication that these people will be important to our understanding of the plot. It quickly becomes apparent that this could be read as misdirection: some of these voices come to the fore for a singular, short chapter, some are even from characters whose influence is minimal and who’ll fade from the story as soon as they’ve said their piece—but in a way that suggests they’re protagonists of their own stories, that they have lives beyond the events in Keeping the House, and must return to those lives now. This is Cin’s mighty affection at work, and it feels democratic, gleefully so. In Keeping the House, everyone is famous for fifteen minutes.

Nevertheless, the cast needs protagonists, and central here are Makbule, Ayla, and Damla: three generations of women in one house. Makbule is losing her mind to dementia. Ayla is glamorous and has innovative ideas about drug smuggling. Damla, our guide in and out of this world, is watchful, bears secrets, loves hard. If Ayla is the backbone of the plot, then Damla is the heart of the cabbage. We meet her as a teenager in the noughties, wrapped up in a puffa jacket with her hair parted in a tight zig-zag, struggling to understand her place and the people she loves. We follow her into adulthood and witness her growing understanding of her voice and her part in the greater story. We follow her backwards, too, to when as a fragile child she picked up her secrets, gained that watchfulness. We watch her take on burdens we know she will struggle with.

Makbule, Ayla, and Damla’s stories are not told chronologically, or always cohesively. The crucial moments of their lives come into focus only after the fact, as they try to contextualise, understand, trace back. Their stories are made of snapshots coming in and out of focus, as memories do. They are secured—and are thwarted—by tradition. At times, they are powerless but practical. They do not know everything about one another.

This could make for a frustrating reading experience, depending on how in control the reader needs to feel. There is a deliberate carelessness with the usual rules. Early on, Damla recalls how, by age fifteen, she’d learned to cook for her siblings: ‘Sweated onions and potatoes. Sulu yemek. Yahni. These were the meals that slid oil into you, that kept you full…’. Then abruptly she is hanging out with pals and rescued from a drunken fall by her beautiful friend Cemile, whose influence runs as electricity through Damla’s life. Here, broad reminiscence, applied to habitual household tasks like cooking for siblings, is jarringly replaced with the specifics of a difficult memory. But this is so often how recollection goes in the real world: a particular memory starts with a general feeling. And this is Cin telling the reader how Keeping the House is going to go: it will read like memoir, it will read like crime fiction, it will read as snappy dialogue in a screenplay, it will be peppered with truncated lines where a full sentence will let too much air in. There will be poignant segments about great friendship and great loss, surveillance and violence and the weight of gender, what happens when we lose our grip on our own stories. There will be hairy gangsters taking the piss out of one another.

Cin liberally uses Turkish and Turkish Cypriot words and idioms throughout, translated in the margins of the pages, or with superscript, or even tucked into the middle of a block of text. This leads to a chaotic page but a more comfortable, instinctive reading experience than would be delivered using footnotes. Cin once again interrupts our expectations of understanding the text, here by breaking the characters’ English, which of course is authentic in terms of representation, but also displays confidence and mischief in terms of authorial intent. On the first page of Keeping the House, Damla refers to Ayla as ‘Anne’—the word for ‘mum’ in Turkish. Superscript informs us of the translation; nevertheless, it could take a reader some time to understand that Anne is not simply the name of Damla’s mum. An author unwilling to risk alienating readers who don’t share Damla’s background would buff out this potential misunderstanding here, but that’s not Cin’s bag at all. This is a novel unapologetically specific to its depicted community, and, well, if you’re not going to let the author lead you, why do you read at all?

There are practical reasons to burst through the limits of traditional narrative for a novel about a specific community. In Keeping the House, the community is, to a degree, self-contained and self-policing. Characters do not need feel the need to pause and explain cultural context for peers, nor to themselves, and so the author must find a way to speak directly to the reader, as in those unruly translation notes. So there’s a fascinating dichotomy at work: on one level, Cin’s hand is everywhere, on another, there isn’t even a whisper of omniscient voice.

Cin decides that dodging the usual rules of storytelling isn’t only necessary in terms of accurately depicting community, but for authentically capturing character as well. Even safe in her own head, Damla skirts around the traumatic experience that privately defines her, as one does with one’s trauma. Ayla’s great plan, when outlined, is more concerned with the beauty of the cabbages than it is with the intricacies of smuggling, because when Ayla considers cabbages, she feels connected to her green-fingered mother. The bosses and mooks who spend most of their free time together sound the same, as close knots of people tend to do. The narrative jumps backwards and forwards in time as characters, prompted by each other’s actions, confront or emphasise formative events from their own lives.

These fragments create a mosaic of intertwined lives and shifting power dynamics, where characters’ memories overlap but don’t align, where sharing references doesn’t need to mean sharing values, and you can best show love by keeping your mouth shut. Cin helps us translate just enough to keep our eyes on the page, then steps away. Whether you find this baffling or thrilling depends on your expectations, but for this reader, always looking for the novel in the novel, it’s the subversion that counts.

Lisa McInerney is the author of three novels: The Glorious Heresies, The Blood Miracles and The Rules of Revelation. She has won the Women’s Prize for Fiction, the Desmond Elliott Prize, the RSL Encore Award and the Premio Edoardo Kihlgren for European literature, and has been nominated for the International Dublin Literary Award, the Premio Strega Europeo, the Sunday Times EFG Short Story Award, and twice for the Dylan Thomas Prize. Her short work has featured in Winter Papers, The Stinging Fly, Granta, The Guardian, Le Monde, The Irish Times, BBC Radio 4 and numerous anthologies.