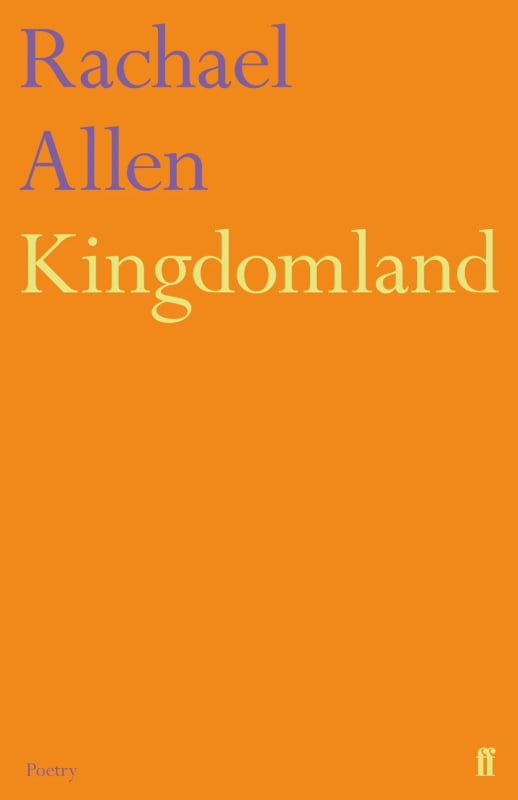 ‘Landscape for a dead woman’, the poem that almost ends Rachael Allen’s Kingdomland, is, the acknowledgements tell us, written ‘in memory’. The poem is named after Carolyn Steedman’s Landscape for a Good Woman, and it opens with a quotation from the first part of ‘Later’ by Rae Armantrout, a poem that goes on to ask ‘how much would this body / have had to be otherwise in order / not to be mine’? The epigraph Allen chooses ends with the lines: ‘Later I’ll try / to rise from these dead’. The plural ‘these’ situates the elegy as simultaneously specific and various, twisting away from interpretation as it invites it, engaging with more than elegy’s generic questions of productivity in loss:

this is what happens
when a woman dies


the landscape
unlocks from its planning


we are reluctant tenants
no one else lives here


we farmed all the grief

Why is this death—clearly profoundly destabilising—couched in vague prepositions and collective nouns: ‘a woman’, rather than ‘the’ woman; a ‘we’ that has ‘no one’ through which to identify itself? Why is the instability of tenancy so rooted in this alignment of the work of mourning with the rhythmic agricultural productivity of farming? Although familial nouns populate the poem and we know there has been a murder in the kitchen—‘a bad husband loitering / in the kitchen of my mind’— the specific narrative of the death is absorbed into the uncanny stasis of grief: ‘no end and no beginning / water laps at my feet’.

A Landscape for a Good Woman was published in 1986. A dialogue between two biographies, that of Steedman’s mother and her own, it was intended partly as a corrective to the masculine tradition of working class autobiography. It is also, in Steedman’s words, ‘about lives lived out on the borderlands, lives for which the central interpretative devices of the culture don’t quite work’. Rigorous and deeply personal, it locates its meaning both in experience itself and in the history of the structures that govern our lives. Above all, it functions as a warning against abstract generalisations, against models of analysis that ‘prevent our seeing the cracks in the system’. Allen’s work lives in the pushing open of these cracks.

Allen, who is Cornish, has stated publicly that ‘Kingdomland’ is an old name for Cornwall. A spectacularly beautiful county with its own fiercely defended linguistic identity, it is the most remote part of England and one of the poorest, with an increasing division between the tourist industry, rich second-home owners, and the residents. Kingdomland operates not only within this geographical borderland: in the strange violence of its imagery, its preoccupation with the precarious horror of adolescence, and the singed ends of human relationships, it interrogates the very mechanisms of marginalisation. Why are certain things, places, experiences erased and elided? ‘Landscape for a dead woman’, ringed as it is by the sea and by encroaching dampness, articulates a fury that rallies against official gatekeeping and interpretation:

counting all the dead women
putting them in a document

burn all documents
rescue the women

Another sequence, ‘Girls of Situations’, also begins with an incomplete mode of knowledge situated at the water’s edge:

History holds the incorrect theories of the sea and how they
don’t fall off the land, made up by men. Small clouds align.
Theories of worship. Women’s bodies collect material the
way metals accrue in organs.

Here, Allen plots out an alternative genealogy ‘of red-cheeked maids in maroon-check pinafores […] no boarding school narrative’ that firmly situates working class histories of labour and physical trauma into the feminist project of constructing a lineage of writers and artists; later, ‘Apostles Burning’ begins ‘I was once a burnt daughter / in a genealogy’. ‘Too young to work, but still changing the beds in the early hours / for a holiday cottage foaming at the mouth for a future untenable,’ Allen’s speaker articulates the specific precarity of female adolescence and young adulthood. Indeed, the entire collection glimmers with girls on edges: ‘Grow up, girl in silver’, ‘The face of a girl fills up with blood’, ‘Seek god’s face in the pustule of a teenage girl’. By the final section of ‘Girls of Situations’, the extended consideration of this violently girlish experience narrows its focus to the specific aching antagonisms of mother and daughter:

I will steal from my own mother to make myself feel richer,
and smoke her old cigarettes to make myself sicker, become
impregnated with ideas and resist her own impregnation, cut
anything out of me that starts to grow in there.

It’s a foundational tenet of feminist marxist theory that in women’s work symbolism and socioeconomic oppression intertwine; where reproduction, production, and the psychic violence of birth and death overlap. Silvia Federici, in a 2013 interview with Maria Vishmidt, reiterated her theories of the duality inherent to reproductive work:

We need to see that the work of reproducing human beings is a peculiar type of work, and it has a double character. It reproduces us for capital, for the labour market, as labour power, but it also reproduces our lives and potentially it reproduces our revolt against being reduced to labour power. In fact, reproductive labour is important for the continuation of working class struggle and, of course, for our capacity to reproduce ourselves.

Federici continues—clarifying the harm that comes from the desire to refuse or escape this kind of work as a whole— to note that ‘if we refuse it completely we risk destroying ourselves and the people we care for’. Allen’s lyricism is unflinching in its record of the violence we enact upon the people we love, and the violence that is done to us in return by a desire to escape the ties that bind us most completely to an identity that predates autonomy, the place of howling intimacy that is both the nightmare and the comforter. ‘I will steal from my own mother…’ comes after the plea for rebirth of ‘I will ask my mother to / push me through the ivory gates’ and desperation to avoid a future that looks like the immediate past: ‘A lousy future that taunts / itself on the end of a string, composting from the inside out like a Halloween pumpkin gone bad’. Maternity, here, is linked to continuance and to manual work, and the following four poems carry this theme forward abstractly and uncannily: ‘Tower of Masks’ begins with the imperative to ‘Chisel at / a bout of stone’; whilst in ‘Prairie Burning’, ‘The Slim Man’, and ‘Multiflora’, reproduction is figured and refigured, first as a nightmarish ecocatastrophe—‘A burnt five-year-old / without eyelids’—then as a ghostly image of a child abducted in the anti-creative ‘landscape unpainted’, and finally in the disquieting romance of a hot day ‘held stationary on the aqueduct’ where ‘I sit by the river and envisage our children’.

Uncanny violence saturates Kingdomland, and in the images of meat that recur throughout the collection, this is wedded to the conceptual subversion of normal process and consequence. In ‘Promenade’, ‘openly wanting something’ is first innocently rendered in simile, ‘like the opened-up lungs of a singer’; by the poem’s closing lines, the imagery of shame and submission inverts the usual relationship between pigs and humans, something continued later in ‘Dad the Pig’ and ‘Porcine Armour Thyroid’, and the opening-up of the speaker becomes nightmarish:

The opening poem from ‘Nights of Poor Sleep’—a sequence originally written to accompany visual artwork by Marie Jacotey— compares feelings of abandonment to ‘an octopus crawling on land’, and ‘No last kiss’ ends with a scene of pastoral familiarity that metamorphoses into a confusion first of animals—hens for lizards—before the parts of the creatures themselves become fluid, unnameable:

The cooked meat of ‘Many bird roast’ is about the violence rooted in return, as the speaker who begins by coming in ‘dandy and present / arguing for a moratorium on meat’ is reminded by the italicised familial chorus that

In The Sexual Politics of Meat, Carol J. Adams writes of the connection between misogyny, carnivorism, and militarism: ‘dominance functions best in a culture of disconnections and fragmentation,’ she says. ‘Feminism recognizes connections.’ Allen’s meat imagery is relentless in the forging of such connections. The uncomfortable equation of human skin and the meat we eat is followed by a ‘BBQ in the barracks’ in ‘Sweet’n Low’, and then the vicious, stilted lines of ‘Beef Cubes’, in which the sexual cruelty of adolescence is figured carnivorously:

who put talc on her face
and sausage blush

on her cheeks
was a meat clown

Terry felt through her jean shorts
told everyone she was wet

Later, her vomit becomes ‘brown squares in the pastry bin’; a whale on the beach, cut in half, ‘exudes its yellow fat’.

The cannibalism hinted at in ‘Many Bird Roast’ and ‘Beef Cubes’ materialises linguistically in ‘The Indigo Field’, but here it is divorced from images of digestion and instead linked to reproduction: more process, more consequence.

Two bees hang
around a severed horse’s head
forgetting that they’re supposed to
pollinate flowers instead of
the roughly opened gland
of a mammal.

The final part of the poem articulates an absence, tries to negate something that doesn’t necessarily exist:

You stood no chance
of being born
I tell myself, as the sea
cannibalises.

This impossible birth then shifts again, rendering the sea’s destructive power as benign:

It manages to forgive itself
every day, without visions
of the baby
making her way towards me
across the indigo field.

The ability to avoid what is figured as the inevitable advance of a reproductive future rewrites the cannibalism as a mechanism of renewal without birth; the erasure of the body and the violence enacted on and by it. In ‘Seer’, the poem that follows, as flesh is ‘grated’ into ‘garlanded toilet water’, the image of this advancing child returns:

Being haunted by a baby is worse
than you’d think. I don’t want her,
an ingrown ghost, intermittent horror

After ‘Landscape for a dead woman’, the three poems that actually end Kingdomland feel like a coda. As the ‘burnt daughter’ of ‘Apostles Burning’ emerges from her genealogy, we come to ‘Banshee’, and the shapeshifting male violence is perhaps finally embodied in the ‘he’ who will ‘sit by the window / at an innocent date / with wandering hands’. The banshee of the title represents the woman murdered in the kitchen ‘and the murdered girls before her’ as ‘the heavy smell of blood / misted up past the crockery’, but the kinetic potential of her retribution extends beyond the familiar narrative confines: light pools through ‘mock-glass’, as she dresses in a sheet to ‘seem more like a haunting’. Like a haunting, but not a haunting, the final two lines of ‘Banshee’—‘and the door she approaches / the red door she approaches’—move into the untitled final poem and its imagery of the burning sea: ‘A girl, strange beliefs / present in the water’, the figure of the banshee now implicated in the destruction of an entire world. This poem, like Allen’s other uncanny seas, is circular: it rewrites, line-for-line, the untitled text that begins the collection. As the burning forest becomes the burning sea, the ‘black and emergent / pool’ becomes the ‘black and emergent / pond’. The figure of the girl endures, both terrifyingly complicit and righteously innocent, floating up ‘to the billowing ceiling’.

Helen Charman's essays have appeared in The White Review, The Baffler, frieze, Another Gaze and the LRB blog. Her poetry has appeared in Carcanet's New Poetries VII, and her first pamphlet Support, support came out in 2018 from Offord Road Books, and her second, Daddy Poem came out in April 2019 from SPAM press. She is writing a PhD thesis about maternity and capitalism, and teaches English Literature at the University of Cambridge and creative writing at the Poetry School in London.