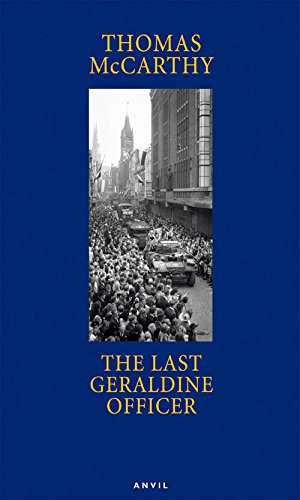 The Last Geraldine Officer opens with three toasts to the times—to Anglo-Ireland and Britain from the Great War to the Iron Curtain—and to the characters—chiefly the ‘Last Geraldine Officer’—that inhabit McCarthy’s historical fictions here. His readers will do the same—if not with cocktails of the 1930s and 1940s—because in this poetry we feel McCarthy’s empathetic imagination empowering both the best instincts of his storytelling as well as the best workings of his verse craft. A fine and funny example of that craft crops up in ‘Dissident Poet’ when McCarthy cannily cross- and half-rhymes his lines: ‘Jameson and oats’ with ‘ghost-cumann votes.’ Always generous even at his most satirical, McCarthy has, in fact, offered us two sterling collections for the price of one. First come thirty-nine poems titled The Fiction, The Sea. Then follows The Last Geraldine Officer. Deservedly, that latter, single fiction will spark not only critical interest but also a popular welcome such as greeted The Sorrow Garden (1981).

The poems in The Fiction, The Sea constitute more than a rehearsal or overture, even though their allusions—especially ‘The Protestant South’ and its closing salute to Louis MacNeice—prepare plainly for The Last Geraldine Officer. Readers familiar with Mr Dineen’s Careful Parade (1999) will find themselves at home in a Munster of Cappoquin and Fianna Fáil, of Cork’s careful Bürgertum, of green-robed Lismore where McCarthy’s pen can ‘disturb the settling peace of things.’ Sentimental misdirection is McCarthy’s game here. His appeal to the ‘backward look’, to borrow Frank O’Connor’s phrase, balances the two other centres of felt ethical gravity in these poems. One can be found in the ease, warmth, and complexity of McCarthy’s tributes to a loving marriage in the lines of ‘The Fiction, The Sea’ and the love poems orbiting it. McCarthy’s contest is with ‘the sea of history’, to borrow from John Montague, because from history the tasks of the poem seem to make only metaphor or ‘a closed thing’. Verse craft usually overemphasises closure, and so McCarthy’s dismay is overstated for love. We understand this when we come to the other centre of gravity here—to McCarthy’s five poems on the Celtic Tiger’s reception of the European Union’s refugees, and especially to ‘Hiding Joseph in Ireland’.

So, in ways both direct and glancing, these first thirty-nine poems prepare us for history, for fiction, and for elegantly pertinent renderings of World War II and the ‘Emergency’ in The Last Geraldine Officer. McCarthy’s design here resembles that of his Merchant Prince (2005), yet his range of reference and allusion now takes in more details—twentieth-century details redolent of the formation of Ireland and, indeed, of Europe as we know it today. Again, McCarthy’s audacity lies in his willingness to make poems out of overlooked materials in the Irish national allegory: the Gaelachas of Norman Ireland, the ‘king’s shilling’ and Imperial service, and the contests of Neutrality through to An Tóstal and the Festival of Britain in 1953. In Merchant Prince, the self-conscious memoir came in prose in the middle of the poems. Here, the memoir comes in verse that wraps around the more immediate raw materials of the Last Geraldine Officer’s war-time experience. Based on a formal count of seven, McCarthy’s verse lets us know that Colonel FitzGerald’s story does not come of easy or fond reminiscence, though the Colonel’s sprezzatura makes it seem so, but of his long working through of moral sentiment. Like many Irish stories, the Colonel’s tale is a liberation narrative tracing his entry into art, action, Eros—and, best of all, into humane moral judgment in liberated Brussels, Germany, and Europe. In ‘Snow Falling on Germany,’ the Colonel recounts his stop in Cologne and a visit to the destitute household of the Celticist Dr Ratzinger, whose children:

…stare in amazement at an Allied officer who seemed
To bring honour to their embittered father. I gave to them
American chocolates and a bog-oak piglet from home—
A mascot from a neutral place, a land of future welcome.

McCarthy’s audacity flowers most truly when he reveals the original matter of the Colonel’s telling: mouldy copybooks and scuffed document wallets discovered in a disused press when, say, Mealy’s comes to clear for auction a house like Templemaurice. These are the Colonel’s sources: a notebook of recipes Myrtle Allen would have envied; scribbled pages of his pocket battle diary; and a damp sheaf of poems in the Déise Irish of the 1920s. The receipts—to use the old spelling—of Mrs Norah Foley stand as tender for the socially coded fulfilments of human appetite, of sustaining vitality, and communion. For McCarthy’s Colonel FitzGerald, each dish— from Villierstown Nettle Soup to Gracie O’Connor’s Lobster Grand—serves up memory à la Proust. For McCarthy’s reader, each receipt wittily offers an opportunity to parse the Anglo-Norman Decies à la Lévi-Straus. The practical vignettes of Big House life in these recipes might appear in too fond an aura, but for the balancing immediacy of the Colonel’s jottings in his diary and the shaping perspective of the Irish poems.

McCarthy dates the entries in Colonel FitzGerald’s ‘battle book’ and to some of his Déise poems. The diary entries register first-hand FitzGerald’s experience of brutal tank battles, the liberation of Brussels, the opening of the Sandbostel Konzentrationslager, and his crossing into Germany at Nijmegan. He leaves notes on his leaves back in ‘Emergency’ Ireland and the London of Elizabeth Bowen’s The Heat of the Day, and of a pan-European affair with Hallie Whelan, an Irish-American OSS officer, culminating in an erotic idyll in San Remo, Italy. Here the careful reader notices something accessibly novelistic that seldom occurs in the brevity of the lyric: how Colonel FitzGerald’s moral constitution grows in empathetic discernment. His diary asks: ‘What happened here, Oh Geraldine?’ The line appears again—’Cad a tharla anso, a Ghearalaigh’ in the key poem ‘Mí an Aibréain san Ollchampa Géibhinn, 1945’. FitzGerald’s moral urgency registers, usually, first as witness in the diary and then feeling shaped as moral discernments in the Irish.

What these Irish poems show and say, though, differs from what Colonel FitzGerald’s later English telling says and shows. For example, if we see FitzGerald as Quixote, then his countryman Paax Foley is his Sancho. Faced with the sight of Sandbostel, Foley’s ‘fearthainne na nDéise’ constitute his heroism:

As here, FitzGerald (and McCarthy behind him) locates the touchstone of his discernment first in his local Irish. In English, FitzGerald’s (and McCarthy’s) longer, versed and measured, garrulous and ruminative retelling of his life up to 1953 or so touches upon other moments of discernment that descend emotionally from FitzGerald’s salute to Paax Foley’s eating of the Tree of Knowledge—a salute that remains almost hidden because it does not appear in the English.

McCarthy has invested FitzGerald’s narrative with a rich store of incident, detail, local reference and cultural allusion that is, in itself, a marvel of critical intuition and felt intelligence. Colonel FitzGerald sometimes views himself through the wrong end of the binoculars, or recognises that their lenses might be fractured. Likewise, McCarthy often leavens his national themes with an invitation to trace signs and portents back and forth through the levels of character parsed out here in the homely genres of the lost notebook and the fireside reminiscence. Such play reveals McCarthy’s respect for FitzGerald’s character and that, in turn, stirs the reader’s affection for the now diminished and overlooked milieu of Anglo-Ireland. This is not Georgian Society revivalism, though. Nor is McCarthy indulging in his version of the Yeatsian fantasy about Major Robert Gregory, for it is not accomplishments of a vanished class or of a privileged individual that matter in The Last Geraldine Officer. Rather it is that a man beset by his class and country in its most difficult formative years, by obligations to art and nation conflicting like geassa of old, can perceive and treasure as his own another’s moral response to human calamity. For our own good— and for our own pleasure—McCarthy has created a marvel in The Last Geraldine Officer.

Thomas Dillon Redshaw teaches at the University of St. Thomas in Minnesota. He is the former editor of Éire-Ireland and New Hibernia Review. In 2004 he published Well Dreams: Essays on John Montague with Creighton University Press. His most recent publication is a chapter in Other Edens: The Life and Work of Brian Coffey (2009) from Irish Academic Press.

Hide and Seek in Berry Bog