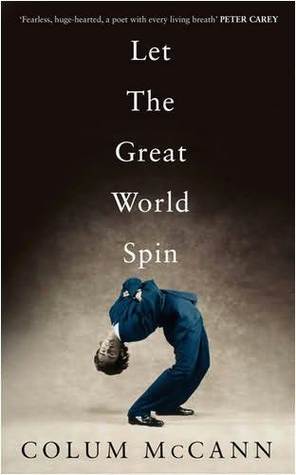 At the Paris Review’s Salon in February 2009, Colum McCann read an excerpt from Let the Great World Spin that was printed in the magazine’s Fall 2008 issue. The Senior Editor of the Review introduced McCann by saying that when they were working on the excerpt for publication, the editors had suggested a change in the wording of one sentence—a small thing. McCann thought about the suggestion, and then said that if he changed that single word, he would not only have to change the whole sentence, but rewrite the paragraph as well. They decided to leave the sentence as it was. It is this careful prose, tightly crafted, that fills Let the Great World Spin: a novel preoccupied with the sounds of voices, bound together to create a vision of New York on August 7, 1974.

McCann’s novel begins with Philippe Petite’s tightrope walk from the North to the South tower of the World Trade Center, a largely forgotten event until the Oscarwinning documentary, ‘Man on Wire,’ which came out in 2008. While the event is hardly the focus of the novel, the walk is what links the narrative strands together; rather than Petite himself, who is never even named, the day is a pivotal moment for each of the characters. In many ways, Let the Great World Spin is a novel about loss, the leitmotif of Petite’s reckless display of mortality on the high wire is mirrored in each character’s narration.

The novel is divided into four books and twelve chapters, and each chapter is told from the perspective of a different narrator. The story begins with Ciaran and Corrigan, brothers living near Sandymount Strand, but the story soon moves to the Bronx projects in the 1970s. There Corrigan, who belongs to a religious order, does charitable work for a home for the elderly as well as take care of the hookers below the Deegan expressway, serving them coffee and letting them use the bathroom in his apartment. His soliloquies on God are long and at times seem detached from the action of the novel, but in creating Corrigan McCann deftly gives us the good with the bad: the clever banter Corrigan has with the prostitutes as well as his academic treatises on God and religion.

A fatal car crash on the day of Petite’s walk is the jumping off point for the rest of the narrators—an ageing hooker, an artist, a Guatemalan nurse, a Park Avenue housewife, and the descendent of a slave. McCann adopts each of these voices flawlessly, and appears completely at ease in each of them—his gift for tightly wrought, tonally aware prose abounds. Like the recent Oscar-winning movie ‘Crash,’ which inevitably comes to mind, the characters are linked together through easy plays of coincidence and chance. But unlike the movie, these connections never come across as silly or forced. There is a genuineness in play here: the huge scope of the novel, an entire city frozen in one day, is made precise by the particularities, the small and multiple threads connecting one story to the next.

The narration of Claire, the Park Avenue housewife, is the most striking and beautiful chapter of the novel. Claire has lost her son Joshua in the Vietnam War. On the morning of August 7, she is preparing to host a breakfast with four other women who have lost sons in the war. There are several Mrs Dalloway moments as she prepares the coffee for their arrival—a woman concerned with the mundane in the face of huge emotional upheaval. But it is the language of this section that is so wonderfully original; Claire’s mimicry of idioms, the litany of deaths. ‘Just be. Joshua liked the Beatles, used to listen to them in his room… Let it be. Silly song, really. You let it be, it returns. There’s the truth. You let it be, it drags you to the ground. You let it be, it crawls up your walls…’ The subtle play on words are some of McCann’s great triumphs.

There is something of the quintessential New York novel here too—a panoramic and intense picture of the city in all its different incarnations. The varying perspectives help create this sense of entirety, of course, but it is the simple descriptions of streets and neighborhoods that make the whole novel tick. This is seen most clearly through Ciaran, the Dublin immigrant, who at first can only see the projects where his brother lives as filthy: ‘Gangs of kids hung out on the street corners. Traffic lights were stuck on permanent red. At the fire hydrants there were huge puddles of stagnant water. A building on Willis had half collapsed into the street. A couple of wild dogs picked their way through the ruin…’ But then, after living there for some time, he sees the same street quite differently:

Some kids nearby had turned on a fire hydrant and were dancing in the spray. One of them had taken a kitchen tray and was using it as a surfboard. The water skimmed him along by the monkey bars, where he fell headlong, laughing, into the fence… It seemed for a moment that Corrigan was right, that there was something here, something to be recognized and rescued, some joy. I wanted to tell him that I was beginning to understand it, or at least get an inkling…

It has been said that Let the Great World Spin is a 9-11 novel. It’s true that one can hardly think of the Twin Towers today without thinking of September 11th. But McCann has attempted to do something decidedly different than novels like Don DeLillo’s Falling Man or Joseph O’Neill’s Netherland in setting his novel almost thirty years before the terrorist attacks. Petite’s triumphant walk inhabits a sense of loss before any tragedy in the novel occurs because of the readers’ knowledge of the attacks. Some may see it as a subtle form of emotional manipulation, but for most of the novel it is a silent, powerful thread. The novel’s last chapter, however, jumps ahead to 2006 and is narrated by the daughter of one of the characters killed on the day the rest of the novel takes place. She carries around a photograph of the tightrope walker she happened to find at a junk sale, a heavy-handed memento of both her mother and the World Trade Center. Providing such an epilogue, to tell the reader who married whom and where the characters are living in the present time, does satisfy the simple curiosity fiction can generate, but it also lessens the power of the distance the novel had from September 11th. Its tragedy was its own. I would have much preferred McCann had trusted the reader, and himself, to remain in his world on that day in 1974.

But the ending does not ruin this novel—its ambition and delivery are as surprising and successful as Petite’s walk.

Emily Firetog is a former editor of The Stinging Fly. She has an M. Phil in Creative Writing from Trinity College Dublin and an MFA in Fiction from Columbia University. She lives in New York.