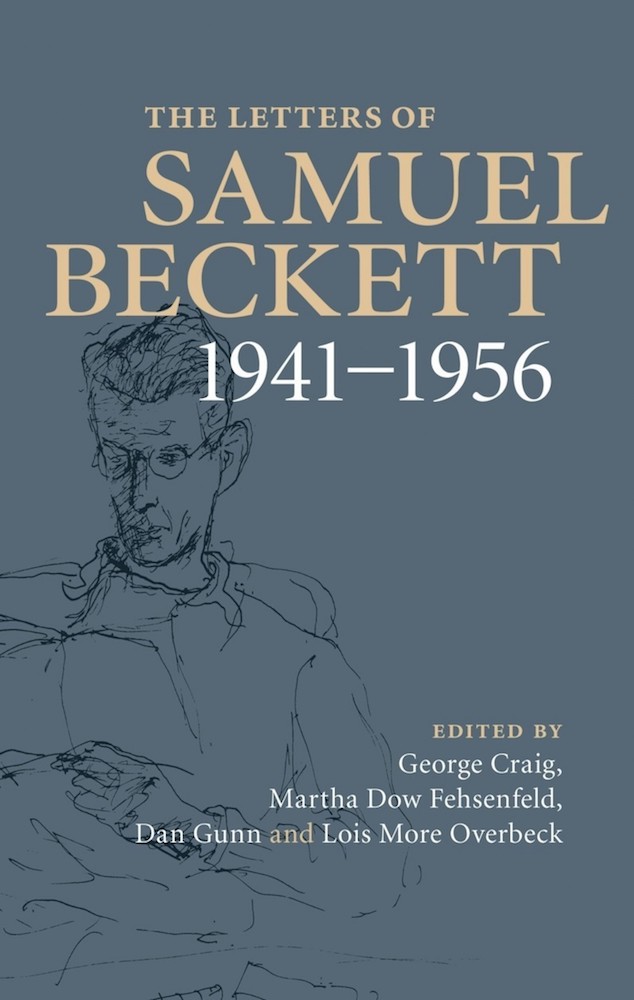 Halfway through writing this review, in want of inspiration, I picked up the book, and, like Mr Bloom with Paul de Kock’s Sweets of Sin, read where my finger opened. This practice (Sortes Virgilianae or Biblicae or Homericae) whereby a passage so selected is considered prophetic or revelatory, produced (I am sorry to say) the following, from a letter to Mania Perón: You are not reading my letters with the attention they deserve.

Whatever the justice of its application in my own case, no such criticism can be levelled at the editors of this, the second of four volumes, whose scrupulous care and formidable scholarship deservedly earned the three-and-a-half pages of encomia for the first collection that kick off this one.

When James Boswell undertook the ‘presumptuous task’ of writing the life of Beckett’s patron saint and namesake Samuel Johnson, he boasted to Fanny Burney: ‘I want to show him in a new light! Grave Sam, and great Sam, and solemn Sam, and learned Sam—all these he has appeared over and over. Now I want to entwine a wreath of graces across his brow; I want to show him as gay Sam, agreeable Sam, pleasant Sam!’

In these letters we encounter Beckett in all the above moods except, unsurprisingly, the fifth one. A master, like Larkin, of controlled grumbling, plenty of bile is directed at the land of his birth and its writers: ‘The thought of academies has always made me feel sick and the thought of Ireland more and more so.’ John Ryan’s Envoy, in which an extract from Watt appears ‘massacred by the compositors’ is ‘that filthy new Irish rag’ and, elsewhere, James Stephens and his charming and innocuous short story, ‘A Rhinoceros, Some Ladies, and a Horse’ are savaged thus: ‘a story […] that you could not wipe yourself with. Despicable old gnome.’

Much of his time, over these his most productive years (Molloy, Malone Dies, The Unnameable, Waiting for Godot and Endgame were written in the period covered), was spent in a bad way: ‘My heart falls backwards down precipices every night, as it did when I was twenty, followed by nightmares, back in the family, floods of tears, fists swinging into the faces of the dear departed…’ Like Voltaire, he likes to cultivate his garden: ‘I watch for my seeds to come up […] Quite happy to go on doing so till the hour of the farce to end all farces.’ But that hour is longer coming than he suspects, and fame will come before it via En Attendant Godot; for if the trilogy smouldered, the play lit a fire that wouldn’t go out.

And when the prisoner Karl-Franz Lembke translated and staged it in jail at Luttringhausen in 1954, Beckett was moved to write him this:

For a long time now, more of less aware of this extraordinary Luttringhausen affair, I’ve thought often of the man who, in his cage, read, translated, put on my play. In all my life as man and writer nothing like this has ever happened to me. To someone moved as I am, phrases come easily, but from a sloppy way of talking, not at all your style, given that I am no longer the same, and will never again be able to be the same, after what you have done, all of you. In the place where I have always found myself, where I will always find myself, turning round and round, falling over, getting up again, it is no longer wholly dark, nor wholly silent.

So sometimes, even for Beckett, there was a holy darkness, a Stille Nacht of sorts.

How bleak is Beckett’s vision? Is he a haruspex who finds nothing in the contemplation of his own entrails, or the sort of walking saint so many of his contemporaries paint him? When his first biographer, Deirdre Bair, asked him why the tree in Godot put out a leaf in Act Two he was quick as ever to deny any symbol. It was only to indicate time passing. But this is surely a little disingenuous. And wouldn’t it be much more like him to have had it wither and fall to indicate the same thing if it were not, as one would like to think, an index of hope?

Like Joyce he is a man steeped in a metaphysic in which he cannot believe, and the Old and New Testaments crop up everywhere in the great atheist’s work. Or does he know something we don’t? ‘Do you call yourself a Christian, Jew or Atheist?’ prosecuting counsel in the Gogarty libel trial asked him. ‘None of the three,’ he replied. Is ‘Fail again, fail better’ just Luther’s ‘Sin harder’ rewritten for a secular age? Writing to Barney Rossett he quotes the reformer: ‘Gott helfe mir, ich kann nicht anders.’ (He is speaking of his compulsion to finish what will become Endgame, ‘Godot is rollicking beside this awful thing.’)

He is full of compassion at any rate, writing to Jacoba Van Velde: ‘I knew that your mother had died, and what sorts of things you’d had to go through. It’s something I’m familiar with. More familiar every day.’ And then (before Godot had appeared and not in quotation marks): ‘Nothing to be done, nothing to be said; nothing but take it.’

The years covered here are, as I have said, Beckett’s most productive but you wouldn’t think so to read the many accounts of his struggles and false starts—of which let one suffice: ‘Never felt less like writing and I haven’t felt like it for years, and never so revolted at the thought of work done.’ But whereof he cannot speak he will not remain silent. He can’t go on. He must go on. And he does go on (and on about it), as in this to the art critic and theorist, George Duthuit:

With regard to Beckett himself, for ‘paint’ read ‘write’ throughout. ‘Paroles,’ to coin a phrase, ‘sans acte.’

‘In the beginning,’ to coin a second, ‘is the void.’ Appropriately for a man whose greatest work is predicated on an absence, this selection begins with one. There are no letters for the years 1941–1945 because Beckett devoted those years to what he later entirely typically dismissed as ‘boy scout stuff’, that is to say working for the French Resistance. The eleven years covered, however, yield fully as rich a trove as the first in the series. A treat then for the casual reader and a must for any serious student of the master of the issueless predicament.