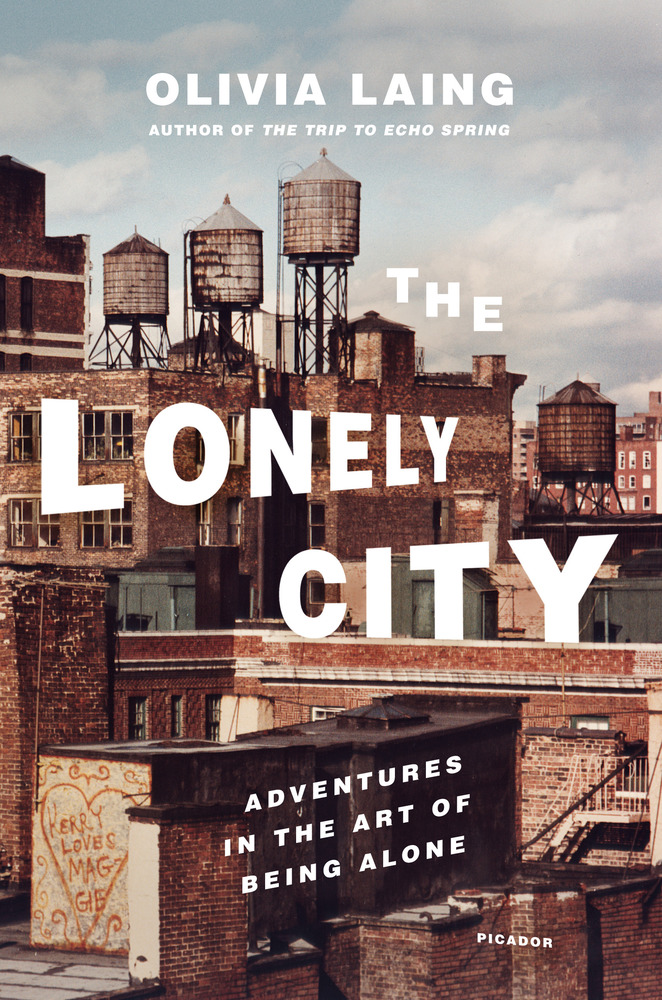 The Lonely City: Adventures in the Art of Being Alone

In the centre of the courtyard was a well and two storeys up, a funnel collected rainwater which was released one drop at a time, the next drop falling only when the final ripple faded. I stood there outwardly still, inwardly reeling. My mind flooded with all kinds of unconnected things; the scraps of Morse code we’d learned at Guides; fairy tales about frogs who dive into the depths to bring back golden balls; the pre-adolescent years I’d spent obsessed with books about the Nazis. Other, hazier things, less literal things: the weight of the past, and the way the dead can seep under our skin. How to remember, and how to forget. It was as if an array of fractured parts of me, snatches of who I’d been and what I’d loved and feared, could for the briefest of moments come together, be reconciled, held.

I was in my mid-twenties, in Münster, Germany with my best friend, and we’d come to see Concert in Reverse, an installation made ten years earlier by the artist Rebecca Horn for the city’s Sculpture Project. Horn had chosen an old tower, sealed for decades, which the Third Reich had used as a prison and execution site. In the dungeons she’d placed dozens of tiny, automatic metal hammers, which tapped at the walls, sometimes in unison, sometimes on their own. The place was thick with pressing ghosts and pain and then, out of nowhere, that astonishing sense of peace, or the possibility of it.

My friend was shakily recovering from a chronic illness and still had periods when the illness and its hopelessness flattened her. I was struggling with my second novel, failing to stem the rising panic that it was no good. Most of the time we seemed wretchedly in love, hung-up on unsuitable or unavailable people. I’ve re-read some of our emails from that time: they talk of canal-boat parties and raves in warehouses, of after-parties, after-after-parties. Vintage dresses worn with cowboy boots. Brittle, ironic jokes about how to be a woman. But below it all is a seam of panic: a sense of the yawning gulf of loneliness that’s waiting for you, and all it takes is one misstep, and once you fall you will keep on falling and falling, and no one and nothing will catch you.

I think of that Rebecca Horn piece often; I thought of it reading Laing’s book, more urgently than ever.

The Lonely City begins with Laing alone and flailing. She’s in New York, in her mid-thirties, and the man she was in love with has abruptly and inexplicably ended their relationship. ‘I don’t want to be alone,’ she writes, in what she describes as ‘an infant’s wail’. ‘I want someone to want me. I’m lonely. I’m scared. I need to be loved, to be touched, to be held.‘ But loneliness is shameful, estranging; it encloses, engulfs, makes meaningful connection with others impossible:

The lonelier a person gets, the less adept they become at navigating social currents. Loneliness grows around them, like mould or fur, a prophylactic that inhibits contact, no matter how badly contact is desired. Loneliness is accretive, extending and perpetuates itself.

In New York, moving from sublet to grotty sublet, Laing finds herself unmoored, drifting, wandering aimlessly through the city’s streets. On her daily trip to a coffee shop, where, hyper-alert to criticism, and self-conscious almost to the point of paranoia, it comes to seem a personal insult that the barista does not or cannot understand her accent and her order. ‘Somewhere in my body, a measuring system had identified danger, and now the slightest glitch in communication was registering as a potentially overwhelming threat.’

Every writer has a moth-eaten old anecdote about shuffling out to the corner shop for some human interaction, but reading Laing’s painful account of her early weeks and months in New York surrounded by people but utterly alone brought back that deep loneliness of my own. Saturdays, when plans had been cancelled or not made at all, when, having been to the Costcutter twice already, you realised that was it: you wouldn’t see another soul until next week. Sunday afternoons, willing the drab, slow minutes on until it would be 9.30pm which was almost a respectable time to go to bed. (Years on, with the ballast of a husband and young child—not, of course, that family is always an antidote to loneliness—and happier than I ever thought I’d have any right to be, I notice that I still can’t bring myself to use the personal pronoun in those sentences.) Admitting to loneliness, even to yourself, let alone publicly, is one of the great taboos of our time. My loneliness was a great greasy slab of Perspex between me and the world. It was the deep ache of being young, footloose and fancy-free in the big city, and knowing this should be the time of my life. It was a recurrent dream about being outside a house whilst inside, the family celebrated Christmas.

‘You can show what loneliness looks like,’ Laing writes, ‘and you can also take up arms against it, making things that serve explicitly as communication devices, resisting censorship and silence.’ Where I have addressed it elliptically, fictionally, she tackles it head-on. She sets about, at first haphazardly, but with increasing intensity and sense of purpose, ‘building […] a map of loneliness’, finding art and artists that seem to have something to say, to her, personally, about loneliness, and about the way we live today:

This book is Laing’s personal echo chamber. The artists she is drawn to are Edward Hopper and Andy Warhol, ‘outsider’ artist Henry Darger, Klaus Nomi and, most of all, David Wojnarowicz. All of them male, although an august array of female artists have fleeting cameos, from Nan Goldin and Diane Arbus to Zoe Leonard, Valerie Solanas, Billie Holiday and Greta Garbo. In a profile for the New Yorker, Laing is quoted as saying, ‘So much of my book is about gender, and frustrations of gender, and that desire to be an anonymous person in a city in a way that I think you only can if you are a man, and a woman never is, because a woman is always on some level a desirable or non-

desirable sexual object.’ In The Lonely City she explains that:

I’d never been comfortable with the demands of femininity, had always felt more like a boy, a gay boy, that I inhabited a gender position somewhere between the binaries of male and female, some impossible other, some impossible both.

She struggles to find an image of a woman ‘at loose in the city’; the closest she comes are the pictures of Greta Garbo, ‘striding round the city in men’s clothes and a man’s trench-coat, taking no shit from anyone’, but these photographs are almost all taken by the paparazzo Ted Leyson, who spent over a decade stalking Garbo. Laing feels desiccated, shrivelled into a corner of herself, bricked-in: even her body is a betrayal. What ‘her’ artists all have in common is that, like her, none of them are comfortable in the world, in themselves, or their sexuality. There is the sense that their art was made not just about, but themselves, wrested from chaotic, violent, abusive or lonely childhoods and fluid, persecuted, or troubled sexualities—and a greater triumph for it.

Laing considers their work and methodology with the mind of an art historian and the heart of a lover. She is scrupulous, and tender, and frequently revelatory. What I felt, reading The Lonely City, was what I’d felt standing in the Rebecca Horn sculpture: a sense of being porous, in the best way, in the way the best art makes you feel. It was the moment I understood what conceptual art was about: connection. It didn’t do it for you, but it made that space; it made that space possible.

‘There are so many things that art can’t do,’ Laing writes in her final chapter.

All the same, it does have some extraordinary functions, some odd negotiating ability between people, including people who never meet and yet who infiltrate and enrich each other’s lives. It does have a capacity to create intimacy; it does have a way of healing wounds, and better yet of making it apparent that not all wounds need healing and not all scars are ugly.

Yes, I thought, underlining that paragraph and underlining it again. That’s it. That’s it exactly. That’s what I felt, or first had an inkling of, in my fractured, miserable, desperate mid-twenties, that afternoon in Münster.

The Lonely City is an extraordinary, meticulous, luminous book. Reading it, I was seized with a wild yearning to make abstract art myself; but by the time I’d finished, I’d realised that what I was really craving was to be understood.

It was the tender, careful way Laing wrote and thought about ‘her’ artists, the hours she spent reading their diaries and listening to their audio journals and handling their detritus, their folders of photographic negatives, their baskets of dirty string, their drab and buff folders of ticket stubs and cigarette butts and pyjamas still in their wrappers, their VHS tapes and dollar toys, as well as studying their art, in her quest to understand. And therein lies the genius, the magic of the book: Laing turns ‘to be understood’ into ‘to understand’, transforms a passive, intransitive verb into its active possibility; an act of enormous bravery.

The old cliché about art, or books, is that they’re an escape. But they’re not always, or only, an escape from: at best, they’re an escape into. An escape out of the vigilant, defended boundaries of yourself, and into the world, or other people, or the possibility of them.

‘I thought I could describe a state; make a map of sorrow,’ says C.S. Lewis in A Grief Observed, wanting somehow to chart a way through his despair after the death of his wife. It was not possible, he concluded, because sorrow ‘turns out to be not a state, but a process.‘ The same things re-emerge, round and round, until it feels you are going in circles. The vale of his sorrow is his and his alone; nobody can alleviate it or guide him out of it, nobody can help shoulder his burden on the way. But in reading his testimony we can, perhaps, find a glimmer of comfort in the knowledge that others have trodden the lonely ways before and come through.

The Lonely City is deep solace, hard-won. This book is Laing’s own map through. Lewis warns us that nobody else’s map can ever lead us out of ourselves: grief and sorrow and loss cannot ever be reliably mapped because co-ordinates shift; what were once reliably roads are now cul-de-sacs. But Laing reminds us, in the book’s penultimate, euphoric lines, that what matters ‘is kindness. What matters is solidarity. What matters is staying alert, staying open.’ We are on our own, but we are alone together; and loneliness does not mean that we are failing, but simply that we are alive.

Lucy Caldwell is a novelist and playwright. Her debut collection of short stories, Multitudes, was published by Faber & Faber in 2016. Awards include the Rooney Prize for Irish Literature, the Dylan Thomas Prize, the George Devine Award, the Imison Award, a Fiction Uncovered Award, a Major Individual Artist Award from the Arts Council of Northern Ireland and the Commonwealth Writers’ Award (Canada & Europe).

Make Way, Folks, the Mannion Brothers Are Coming Through