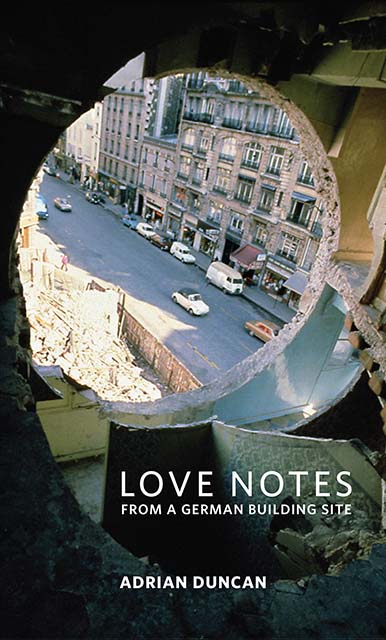 Towards the beginning of Adrian Duncan’s debut novel, the main character muses over the relationship between an architect’s designs and the actual building constructed on site. ‘I felt we were enacting an abstraction, but my thoughts crumbled around where exactly the abstraction occurred’. Though this is a novel that shows much promise, the reader’s experience of the relationship between the formal planning of the book and the experience of reading it might be described in similar terms.

The opening of the book sets up an exciting experimental premise on which the novel fails, in many respects, to deliver. In the introductory chapter, the protagonist introduces us to the concept of ‘love notes’, his term for lists of etymologically-related words which he has collected over the course of his time on the building site in Berlin. Looking up a necessary word in the dictionary, the traces of language are tracked and noted down.

I decided to describe what occurred on the building site by using this sequence of words as a guide for my memories. I thought the best approach was to focus on three short intervals that occurred during the beginning (November), middle (February) and at the end (May) of the contract. These periods of time seem to me important because they led to a shift in my values, and me pursuing a course of action I had hitherto not seen as viable. This account is organized in sections, from 1.0 to 3.7 and it forms the backbone of the book.

This, however, isn’t really the book we get. The ‘love notes’ are included throughout, but they bear only an oblique relation to the narrative itself, and suggest something far more linguistically-exciting than we are given. The third ‘love note’ is the one that comes closest to delivering on the original premise, but the relationship between formal ambition of the novel and its execution is shaky. This book is not an etymological puzzle; nor is its skill in formal experimentation.

The book’s central narrative, in fact, is beautifully-rendered and sensitive in its restraint, its gradual accrual of detail. Concerning the relationship between the protagonist, Paul, and his girlfriend, Evelyn, this is the real heart of the novel. Pushed out of Dublin through a familiar combination of unaffordable rents and untenable part-time work, the couple move to Berlin. Tracing their family histories (Evelyn is the daughter of German immigrants to Ireland), the cumulative effect of their recollections transforms the novel into a meditation on migration, language, memory, and masculinity. Although eventually the two narrative strands (the life of the construction site, and the life of the couple) coalesce around Paul’s character, there is little crescendo in this book, and a reader would be forgiven for wanting more in the way of event, since the revelations of character are relatively slight.

Though there is merit in the fragmentary notes surrounding the central narrative, many of the building site scenes feel a little shallow, and are often concerned with the mundanities of project management, corporate structuring, and construction. That is not to say that such subjects are without interest (in fact, Duncan often proves the contrary); rather, they are only on occasion made to chime into something greater than the individual parts. Tales of mismanagement, on-site mistakes, and the peculiar camaraderie of the building site are by turns touching and a little dull, and it seems as though the will to be experimental or clever (in formal terms) has distracted from the heart of the novel itself.

That said, Duncan has a knack for describing the particular turns of mood on a building site, and the ways in which masculinity is played out there. Having grown up in a family of builders, these scenes were particularly resonant, and made one wonder at how little these places (often so full of play and banter and pathos) are represented in fiction.

In the winter they are grim places and a gallows humour often takes hold. In summer they are still grim, but when the sun is out they become more convivial and feel, with the theatrical shift in mood that accompanies the sun, like playhouses.

Perhaps a new critical interest in masculinities will shift our attention towards such sites, though the classism of the publishing industry will likely stand in the way.

Amongst the love notes, other notes are included: collected character studies and memories. Setting these apart, rather than incorporating them into the rest of the narrative, Duncan suggests that they relate to the themes of the work itself, and how it should be read. One of these, entitled ‘A note on how an engineer sleeps and wakes’, seems particularly telling:

When engineers wake at night, particularly when they are working on a large and stressful project, their dark and malformed thoughts often conflate with what is unknown in the molecular make-up of the material about which they are fretting.

Duncan’s narrative of oblique relations seems to coalesce momentarily here. The materials of the building site, its breakages, its dead-ends, and the way in which architectural and structural plans relate to the built object, hint towards this relationship between what is unknown in both memory and physicality. The things that are ‘dark and malformed’ in the histories of Evelyn and Paul come through in this way too, being ‘fretted’ over throughout the book, and eventually taking material shape in the present moment.

Perhaps the best chapter of the novel, reflecting the skill with which Duncan draws his characters, is simply titled ‘Evelyn’. Here, the prose is sparse and lucid, and holds the weight of elegy in a crystalline form. Telling the tale of Evelyn and Paul’s holiday to a remote Swedish house by a lake north of Stockholm, Duncan also delves into memory, and the question of how each character handles and responds to loss. The distance between Evelyn and Paul is particularly poignant, and rendered with a careful and intelligent hand. Paul tells us:

I come from a large family where, when we were young, self-expression took on an at time exorbitantly competitive aspect, and I often wonder what the moulding forces on Evelyn, as an only child, might have felt like. […] I am unsure at what register the fluxes of the world meet her, or trouble her, but she is calm and thoughtful company, and it hurts to imagine being without her.

In such passages, the reader is struck by Duncan’s skill in delivering complex emotional detail in easy, unadorned prose.

Building the novel towards a gradual acknowledgement of violence, Duncan is sure-footed in his revelations, showing much restraint. Though the formal ambitions of the book never quite live up to their initial promise, and are at times distracting, Love Notes From A German Building Site is an interesting debut. The relationship between Evelyn and Paul, which is the narrative heart of the novel, is delicately-observed and resonant; however, the experimental form is not entirely successful in lifting the book into something more than the sum of its parts.

Seán Hewitt was born in 1990 and read English at the University of Cambridge, where he received his college's Emily Davies and Lilias Sophia Ashworth Hallett scholarships and twice received the Charity Reeves Prize in English. He is a fiction reviewer for The Irish Times and a Leverhulme Research Fellow at Trinity College, Dublin. His debut pamphlet, 'Lantern' (Offord Road Books, 2019) is Poetry Book Society Summer Pamphlet Choice for 2019. His debut collection is forthcoming from Jonathan Cape.

A Most Shameful Inspiration