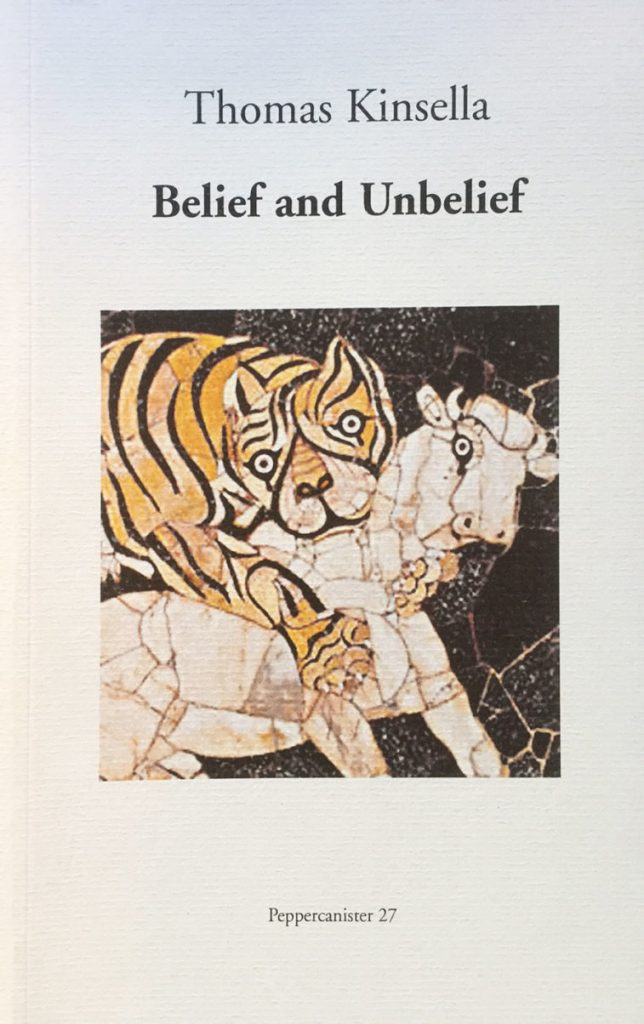 Man of War / Belief and Unbelief

Thomas Kinsella once said that poetry is the ‘ascendancy of the humane’ and his own work unflinchingly explores the humane and its antithesis. Kinsella consistently proceeds on two fronts in his battle for aesthetic excellence; the first is marked by a direct confrontation with immediate issues such as in his new collection Man of War and the other is represented by a more challenging inward exploration which is found in the second collection Belief and Unbelief.

Man of War joins ‘Nightwalker’ (1968) and Butcher’s Dozen (1972) by tackling modern social and political concerns in a direct response. In this collection, Kinsella signals the title sequence as an occasional poem when he notes its conception ‘on being asked to sign an appeal for the abolition of war’. Kinsella explores themes of violence by animals and humans and discovers, ironically, that humans are the only living creatures that methodically seek to destroy one another. War is a perfect subject for Kinsella who applies the recurring themes of waste, process, hunger, desire and violence throughout his poetry.

In the second poem, ‘Retrospect’, Kinsella expertly modulates his tone to provide maximum impact. The first stanza recalls the glory and splendour of past wars ‘when ranks of the brave, in formal uniforms, / attacked each other in a place appointed’ but the grandeur of a romantic style of warfare shifts to a much more visceral physicality with ‘the first shock of body contact’. The reader is then drawn into ‘the reality, the raw disorder’ of mortal combat with ‘spears and rapiers into breasts and bowels; / axes hacking heads and necks asunder’.

Kinsella is relentless as he charts the scientific development of mankind’s warlike societies. The post-World War I social appeasement which gives ‘equality / for the lower orders’ serves to open the ‘craft of warfare […] to the common man’. The lower classes are recruited to a more active participation in the carnage:

The subject multitudes, brothers in arms,
summoned from their commonplace concerns,
trained to change their nature and equipped
to slay each other over the long term.

Kinsella finds the slaughter of war and the co-opting of the lower classes as fodder for these imperial games repugnant. This concern for warfare and its human cost represents an ongoing obsession that Kinsella first explores in ‘Downstream’ (1962) where his narrator notices the ‘soil of other lands / [d]rank lives that summer with a body thirst’. The shifts in form found in Kinsella’s work during the 1960s parallels a movement towards universal concerns that reflect the post-war shock of his generation.

In the final poem of the Man of War title sequence, Kinsella replies to the call for the abolition of war saying that he will sign any such documents ‘if I can find / where to send them that would have effect’. Kinsella signals postmodern helplessness in the face of the hegemonic control of militaristic imperialism. His poetry continues to kick against the pricks of institutional oppression by attempting to bring some sort of counter voice into contemporary literature. Kinsella has been unflinching in his social concerns from his early interests with the modernising forces of 1950s and 60s Ireland, through to his response to inequality in Northern Ireland, and then his later poems reacting to the Wood Quay development and the ongoing social problems of his native Dublin.

Kinsella ends the title sequence with an ironical Swiftian proposal suggesting that the leaders of warring countries fight ‘naked against each other in a pit’. He then finishes Man of War with ‘Notes’, seven poems that act as notes to the three poems of the title sequence. These highlight Kinsella’s working style which involves a methodical and scientific-like research to analyse his subject before filtering it into the lyric act. ‘Notes’ finishes with a diatribe against the modern warlord George Bush which ends with an accusation of his reduction of language to ‘simple rhetoric and a lack of feeling’. Bush’s usage of language and history stimulates Kinsella’s desire to know who has the authority over truth—the dominant historical narrative or the poetic voice.

The second Peppercanister offering, Belief and Unbelief, represents Kinsella’s more personal inward probing. Kinsella brings his readership through a complex inner exploration in his poetry from 1973 onwards. This begins with a Dante-esque descent into the underworld of his psyche in ‘Notes from the Land of the Dead’ (1973) and finds its perfect outlet in the Peppercanister publications. Collections such as One (1974) and Songs of the Psyche (1985), among others, continue to explore Kinsella’s psyche through his own personal experiences, Irish myth and prehistory, archetypal imagery, classical and Irish music, and German literature. In Belief and Unbelief, Kinsella follows his quest for some sort of an understanding to the life and relationships around him in light of the bigger questions that framed his early life; mainly religion and its replacement by the poetic muse.

The opening six poems, which are set outside the title sequence, deal with choices and meetings in Kinsella’s life and often connect to other poems and moments encountered within Kinsella’s oeuvre. ‘Novice’ sees Kinsella starting his poetic journey by ‘beginning to be solitary in my habits’. ‘Delirium’ signals a Jungian journey that sees the ‘[w]ill drained bare / back to the dark / and the depths that I came from’. ‘Superfresh’ provides an encounter with an archetypal female similar to the one that haunts ‘Phoenix Park’ (1968), while ‘Echo’ recalls early encounters with love and meaning. This section ends with ‘Art Object’ which is a wonderful ode to the muse wherein the object of the muse’s ravenous feeding is the young poet himself.

The title sequence is an examination of Christian faith as it manifests itself in relation to Kinsella’s poetics. Christian imagery contrasts with sensual images to create a dichotomy between the two as they are represented within Kinsella’s sensibility. The final poem shows how they are resolved as the capitalised personal pronoun ‘My’ signals the divinity within the self which, for Kinsella, then supersedes the teachings of organised religion. The poem ends with:

[…] justify in the end
the seeker after justice
and not the power seeker
crumpled in his corner.

Kinsella is now back to the crucial question of the authority of truth in the postmodern world and his faith falls with the power of poetry by returning to the biblical tale of the meek inheriting the earth.

Kinsella left UCD in the late 1940s for a career in the civil service and like many writers at the time was forced to earn his income from somewhere else than his writing. He became a key employee in the Irish Department of Finance during the late 1950s and early 1960s putting him at the heart of the modernisation of Ireland. In 1964, he chose a different path that took him away from that life and onto a more obscure and challenging odyssey following his muse. Kinsella relentlessly pursues artistic perfection at any cost and in his uncompromising quest has, dare I say, followed the righteous path.

Andrew J. Browne is a Doctoral Teaching Fellow in the English Department at NUI Galway where he conducts doctoral research and teaches contemporary Irish fiction.