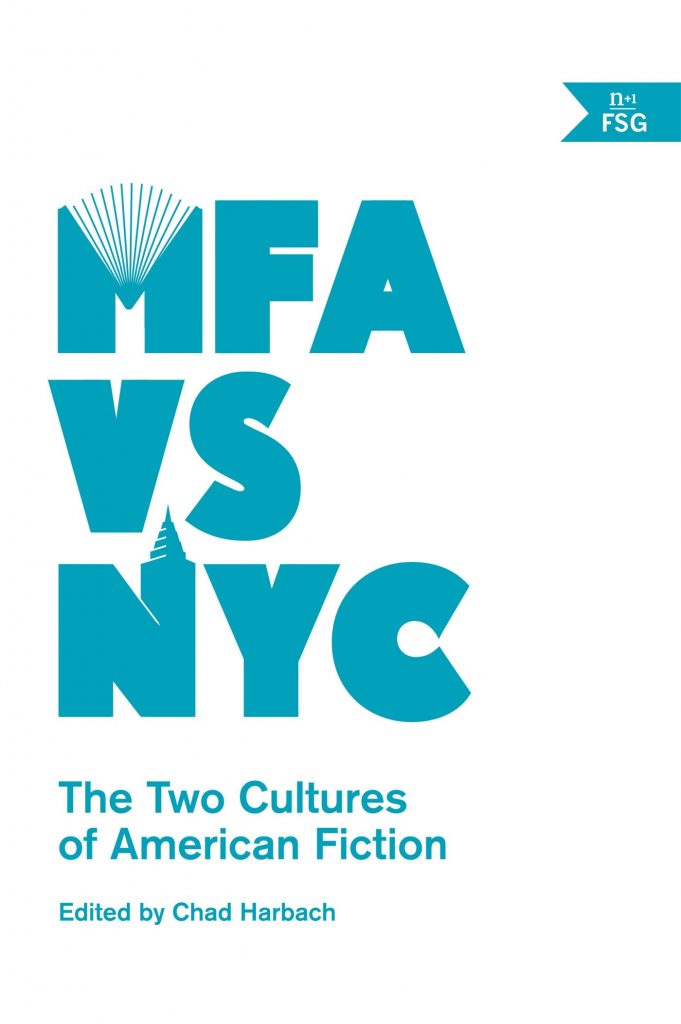 Full disclosure: I sat down to read this book sharpening my critical knives, ready to do the full Gore Vidal. A collection of essays by privileged Americans wrestling with the question of whether or not to do an MFA? Come on. Three hundred pages later, I was completely disarmed. I wanted to email every writer I know and tell them to read this book. Because this is a book with a secret theme. It’s only superficially about the “two cultures“ of contemporary American literature—the university-based MFA culture and the New York-based commercial culture. What it’s really about is the difficulty of being a writer in the early decades of the twenty-first century. Reading it will, I think, be a consoling experience for anyone who (as Gore might have put it) toils in the literary vineyard. There is pathos here, and some hard truth. But there is also inspiration—that most un-Vidalian of comforts.

But first, the ostensible theme. MFA vs NYC takes its cue from an essay of the same title published in n+1 by Chad Harbach in 2010. Harbach’s essay was itself a response to Mark McGurl’s widely influential book The Program Era (2009), in which McGurl, an academic at Stanford, argues that ‘the rise of the creative writing program stands as the most important event in postwar American literary history.’ McGurl’s thesis is now pretty much axiomatic, perhaps because it was an idea whose time had come. As Harbach—author of the hugely successful The Art of Fielding (2011)—puts it, ‘It feels, reading McGurl, as if the MFA beast has at last been offered a look in the mirror, and may finally come to know itself as it is.’

So what does this beast find, when it looks in the mirror? (Every single reviewer of MFA vs NYC has declared themselves ‘for’ one side or the other—so, in the interests of clarity, let me say at this point that I do not have an MFA, although I have taught creative writing and have no great objection to the MFA model. MFAs seem, on balance, to have done very much more good than harm, and people who complain about them tend, it seems to me, to be people who haven’t got one themselves, and who feel, in a very writerly way, threatened by those who do.) The standard criticism of MFA writing is articulated, here, by Elif Batuman, author of The Possessed (2010), who writes, ‘I feel about [program fiction] as toward new fiction from a developing nation with no literary tradition: I recognise that it has an anthropological interest, and is compelling to those whose experience it describes, but I probably wouldn’t read it for fun.’ But Batuman’s problem isn’t with MFA programs per se; it’s with the way in which they have been dragooned into service as a branch of Identity Politics (cf. Junot Diaz’s recent complaint in The New Yorker that his MFA class was ‘too white’). As Batuman herself says, ‘there is a genuine problem when young people are taught to believe that they can be writers only in the presence of real or invented sociopolitical grievances.’ But she also concludes that an MFA ‘is doubtless as incapable of ruining a good writer as of transforming a bad one.’ Besides, if you try to name an interesting contemporary American novelist who didn’t study Creative Writing at some point in their college career, you can’t—there aren’t any. (Junot Diaz is a great writer in spite of his identity politics, not because of them.) The rise of the MFA is now a fact. But it is also a fact that, if a hundred people get an MFA, maybe three of them will go on to produce interesting work. This is simply how it is. Have the other ninety-seven people been defrauded? Keith Gessen worries that, by teaching untalented students, he is collaborating in a lie: ‘Weren’t you taking part in that deception that all these students might become writers?’ But this is the predicament of all teachers—if a hundred people study geography, and only three of them become geographers, have ninetyseven others wasted their time? Humanities departments have always functioned by throwing knowledge in the direction of a heterogenous mass of people in the hope that a few of them will find worthwhile ways to use it. Short of wholesale societal upheaval, I don’t see how this will ever change.

As Harbach acknowledges in his introduction, the whole binary opposition of MFA vs NYC is useful but not definitive. He is correct when he points out that ‘This situation—of two complementary economic systems of roughly matched strength—is a new one for American fiction.’ The true fascination of the essays collected here lies in the ways in which they map the brute realities of how one negotiates these economic systems. The collection as a whole ends up being a collective story about money and survival. For it turns out that even once you’ve spent three years honing your craft on a beautiful Midwestern campus, you’re still probably going to end up waiting tables. ‘Programs tend to be a sweet deal,’ said David Foster Wallace, but they don’t guarantee you an income; and they don’t teach you how to deal with money when you get it.

John Gardner, in his indispensable On Becoming a Novelist, observes that the average writer, as well as being churlish, childish, and psychologically unstable, is also almost always improvident. The essays assembled here more than bear him out. What we have here is a choric song of the financially hapless. ‘How had I managed to squander all that money?’ asks Keith Gessen plaintively, in the second of two essays frankly entitled ‘Money.’ Again and again, contributors emphasise the near-impossibility of making a living as a writer, the inevitability of debt, the agony of being unable to pay the rent: ‘I was carrying $10,000 of credit card debt,’ writes Eli S. Evans, ‘incurring endless fees and penalties.’ ‘In 2011 I made $7,000,’ says Emily Gould. ‘That year, with what was left of my graduate stipend, plus some journalism and a book translation (€1,500), I made $20,000,’ says Gessen in ‘Money (2006).’ ‘Suddenly I was down to $10,000,’ Gessen laments in ‘Money (2014).’ ‘And then $7,000. And then $3,000. Then we bounced that rent check.’ Eli S. Evans again: ‘What was it like, during those years in the desert? […] It fucking sucked. It sucked because I was poor. It sucked because I would throw these bits of writing out into the void.’

Not all of these stories end with magnificent reversals of fortune. In fact, most of them don’t. For anyone who still thinks that ‘becoming a writer’ will magically solve all your problems, these essays will serve, I hope, as a bracing corrective. The real lesson here is that, MFA or no, being a writer is an incredibly hard and lonely thing. You have to live with purulent levels of anxiety and doubt. You will probably fail, repeatedly, and then fail again. But reading these essayists as they grope their way towards these unpleasant truths isn’t, remarkably, a depressing experience. It’s an uplifting one. Because, debt or no debt, MFA or no MFA, the work gets done. This collection may or may not change your mind about the merits of the Creative Writing program, or of the fiction produced therein. But perhaps that isn’t the point. Books that offer genuine solace for writers are rare. This is one of them. What it says—sometimes tritely, sometimes movingly—is that we are none of us alone, as we try to teach ourselves to write and, not incidentally, to live. So forget about that overdue rent cheque, and read it. I think it will help.

Kevin Power is the author of two novels, Bad Day in Blackrock (2008) and White City (2021), as well as a book of criticism, The Written World (2022). He is the winner of the 2009 Rooney Prize for Irish Literature. His writing has appeared in The New Yorker, The Guardian, Irish Times, and many other places. He teaches in the School of English, Trinity College Dublin.