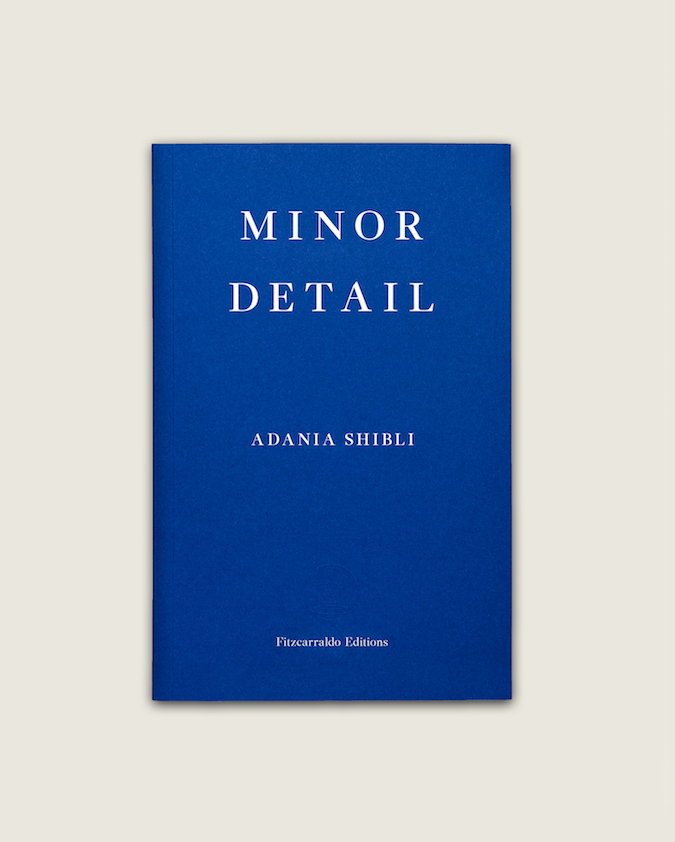 “As part of their training, historians were taught to believe that their responsibility consists of accounting for the significant, endurable, and lasting consequences of their protagonists’ actions, thus implicitly affirming the nothingness of others’ shredded lives,” writes the theorist Ariella Aïsha Azoulay in Potential History: Unlearning Imperialism. She argues that whenever historians ignore, label as “alternative”, or claim to “discover” the nameless many who resisted and continue to resist oppression, the tools of imperialism – such as teaching as “progress” the destruction of people’s worlds – are at work. Those who established the court of history can then, amongst other things, “sanction the disappearance of people in a way that their lasting presence can only be perceived and theorized as a ghostly haunting or a partial afterlife.” Adania Shibli’s Minor Detail not only lets these ghosts speak, but asserts the continuing presence of those who are living, enduring, and refusing to be made into “past”.

The Palestinian author’s third novel is a taut and subtle work of just over 100 pages. Its density of description can even be described as claustrophobic; the minute details of everyday textures, sounds and sights transport the reader to its two settings, August 1949 in the Negev desert, and present-day Israel/Palestine. The story begins at the tail end of a period roughly between 1947 and 1949 that Palestinians mourn as al-Nakba (“disaster”, “catastrophe”) — the expulsion of over 700,000 Palestinian Arabs from their homes. It is told from the perspective of an Israeli officer of high rank who is tasked with securing a large swathe of the desert; this entails daily patrols to locate and kill any of the Arabs and Bedouins living in or grazing their animals around the area. One night, the officer is bitten by an unknown insect; as he continues to lead his men in a daze of pain and hallucinations, the unit come across a group of unarmed Arab farmers. They murder all but a teenage girl, whom they bring back to camp. The fate we fear awaits her is delivered almost incidentally, even procedurally; cleaned with a hose, her hair cut and de-liced with petrol, she is placed in the officer’s tent and the soldiers are warned away from her. The officer cannot sleep from his poisoned bite, and rapes her in between passing in and out of consciousness. She is shot and buried in the desert the next day. Shibli’s style is almost clinical throughout this first half of the novel; with all characters nameless, and no insight into the officer’s or girl’s thoughts, her restrained tone is at one and the same time unnerving, detached and expectant.

The story then pivots to decades later, adopting a style somewhere between first-person and second-person. The “I” is that of a young Palestinian woman who prefers solitude, finds solace in her routines, and focuses on the minutiae of her everyday life in Ramallah in the West Bank. A meticulous yet opaque narrator, she tells the reader she “hopes [she] didn’t cause any awkwardness when [she] revealed that [they] are living under occupation”. One morning, as a building near her office block is cordoned off by the army and bombed (where “three young men had barricaded themselves… nothing struck me as unusual”) the tragic story of the girl murdered in 1949 catches our protagonist’s eye in the newspaper. The day of the crime is twenty-five years prior to her birthday, to the day. “I realise that my interest in this incident on the basis of a minor detail such as the date on which it occurred is a sign that I’ll inevitably end up trespassing borders once again,” she thinks.

Our narrator knows well the operations of borders of myriad kinds: from the obvious, like the army checkpoints that determine her mobility, to the intangible, like the slightest shift in posture that could mean the soldier who was about to wave you on prepares instead to shoot. Yet she feels compelled to investigate this “minor detail” of recent history. She rents a car and borrows the ID of a colleague with the right Area code – she is Area A, which could arouse suspicion for its distance from her destination, and her colleague is from Area C, Jerusalem, which could make for a more convincing journey – even though “their existence constitutes a security threat if they utter a word of Arabic outside their area”, regardless. Setting off first to a military museum in Tel Aviv then south towards the desert, Shibli’s narrator is occupied with little else except for the immediate details of her physical reality at any given moment. As the reader travels with her through now-disappeared Palestinian villages, her extreme focus on the immediate begins to make more sense. It is a life raft of sorts for the narrator as she passes through a landscape of hauntings. In a somewhat literal but effective motif, our protagonist switches between consulting a pre-1948 Palestinian map and an Israeli government-issued map as she drives. She sees settlements where one map says there should be desert, and desert where another map says there should be villages.

At face value, Minor Detail recounts a past incident, followed by a quest to uncover it years later. However, it both thwarts and goes beyond the expectations generated by this familiar narrative form, revealing its overarching concern to be the instability of historiography itself. The protagonist’s journey begins to give us a sense of how prolonged occupation is also an enforced amnesia. She notes that Palestinians old enough to recall the details of “what life was like before all this” number ever fewer as the years drag on, while the Israeli museums and archives she visits are well-preserved and deserted, serving to house what Frantz Fanon once so aptly termed the “mummified fragments of culture” – often removed from the living culture of the people they claim to represent, these are useful tools in the hands of any nationalism seeking to enshrine its legitimacy by invoking a certain version of the past.

One offhand remark particularly captures the incomplete nature and perpetual cross-currents of historiography: when our nameless protagonist arrives in Nirim settlement, which roughly corresponds to the desert camp where the original crime occurred, she finds its resident archivist willing to talk to her. As it turns out, an incident he vaguely recalls from his military service in the Negev is finding the body of a Bedouin girl in a well. “When Arabs are suspicious about a girl’s behaviour, they kill her and throw her body in a well. Such a shame, but they have such customs,” he explains. Our narrator remains silent.

Historiography done by and for hegemonic power is a process that entails, amongst other things, the transformation of exterminatory violence into empirical facts to be classified, documented, archived, and displayed. It seals people into a differential body politic – from co-citizens of a shared world into citizens and non-citizens (the “undocumented”, “migrant”, “refugee”, or “displaced”). Minor Detail captures with devastating restraint and effective symbolism how such differential rule not only depends on violence, but also upon the citizen remaining blind to the potential world stolen from them – a shared world of co-citizenship – whenever that violence is done to others in the name of securing citizenship for some. While Minor Detail is certainly captivating for its spare and powerful style, it is its grappling with such fundamental questions about the production, preservation, and destruction of the past, as well as the ways in which these conditions determine which futures can be imagined, that makes it a work of undeniable political urgency.

Sarah Jilani is a PhD candidate at the Faculty of English, University of Cambridge who researches postcolonial literatures and film. She has written on art, film and books for publications including The Economist, The Guardian, The Times Literary Supplement, and Frieze.

the court of the red queen