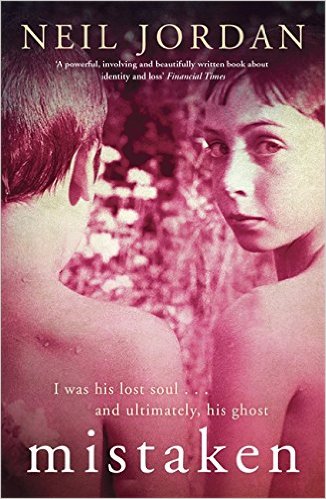 When Neil Jordan’s collection Night in Tunisia was published thirty-five years ago, Sean O’Faolain wrote: ‘if he keeps and develops his primal gifts… he will become an outstanding writer.’ With the publication of his fifth novel, Mistaken, it’s clear that Jordan has indeed become the outstanding writer O’Faolain foresaw. Formally a first-person remembrance addressed to a female ‘you’, the new novel adopts the narrative strategy of ‘A Love’, the final story of the Night in Tunisia collection. Taken together, Jordan’s five novels to date range over one hundred years of Dublin history, and all investigate the complex relationship between memory, imagination and identity.

Midway through Mistaken, Kevin Thunder, the narrator, describes his talent as a draftsman: ‘I could reconstruct the dimensions of a space from the remains of any significant detail. Original plans were a help, but even in the absence of them I could close my eyes and see the skeleton of the original structure. Like a ghost from the past reasserting itself on the present, I could sketch what was once there.’ It’s a fair summary of the concern with the spectral city that runs through all of Jordan’s fiction. It might serve as a warning, however, that any attempt to recreate the past will necessarily be subject to the vicissitudes of memory and imagination. The closing words of the novel assert as much: ‘… memories are unreliable, and strangely pleasurable, one can wallow in them, invent a detail. Sometimes an afternoon goes by and I look at two typed pages and wonder, whose life was that?’ Significantly, while one double in Mistaken writes novels of dubious integrity about rural Ireland, the other becomes wealthy creating fictional cities for arcade games.

Thunder has grown up in 14 Marino Crescent, next door to the house where Bram Stoker was born, and his childhood dreams are vampire-haunted. In another Gothic turn, Thunder is constantly ‘mistaken’ for a doppelganger, Gerry Spain, a confusion that forms the driving force of the novel. But just as the vampire morphs into a dodgy character in a coat who follows the boyhood narrator into a cinema, Jordan finally opts for a plausible explanation for the uncanny existence of the narrator’s double. In one memorable image, Thunder describes the city as a sphinx, with Howth and Bray Heads the beast’s outstretched paws. If this sphinx has a riddle, then, as in Oedipus, it’s one centred upon identity. Like Oedipus, the adopted son must embark on a search for origins which leads inexorably to the birth-mother. What’s characteristic of Jordan’s writing is that this encounter with the maternal is haunted by the uncanny, with the decrepit mother’s twin arriving as if stepping from a mirror. Each old woman leans on a stick, like the three-legged creature of the sphinx’s riddle.

Donal Gore, the narrator of Sunrise with Sea Monster (1995), grew up in the house directly adjoining James Joyce’s childhood address which makes it inevitable that critics reach for Joyce when considering Jordan’s oeuvre. However, Jordan’s writing displays none of the baroque exuberance of Ulysses; its restraint is characterised instead by that ‘scrupulous meanness’ which Joyce set himself for the stories of Dubliners (always provided we remember that meanness here denotes averageness). Perhaps to pre-empt lazy comparisons with Ulysses, one of the few references to Joyce in Mistaken refers to 16th June 1904 as the day in which he was ‘frigged’ by Nora Barnacle! Jordan is admirably precise in his language. Dublin buses ‘judder,’ the sound of rats over the roof is ‘a kind of pitter-patter with a slithering intent,’ while an entire, horrific history is conjured up in the image of Christian Brothers pacing an exam hall, ‘their leathers hanging by their side like enormous sexual organs.’

The past has as much reality as the present throughout Mistaken, and may indeed be resurrected—Thunder’s memory-novel is being written in an attic cluttered with clocks which uncannily come to life when the narrator’s niece, the ‘you’ to whom the writing is addressed, first enters. In Proust’s A la recherche du temps perdu, Marcel’s memories are famously triggered by the taste of a Madeleine cake. Mary cakes play a comparable role in Mistaken, though it’s crucial to understanding Jordan’s purpose here that the memories the cake evokes in both Kevin Thunder and Gerry Spain, his privileged ‘double’, are largely spurious. ‘But memories are unreliable,’ writes Thunder, and it’s a source of fascination how teasingly unreliable the minutely detailed evocations of the city can be. Can Bray be glimpsed from Dun Laoghaire pier? Are Belvedere blazers grey? Are the Turners housed in the Municipal Gallery? In which Bewley’s are there Harry Clarke windows? Would an adolescent girl learn about sex from Mandy and Judy? Surely the Teachers Club is in Parnell Square? The intrusive meticulousness in regard to location is of course Thunder’s rather than Jordan’s, and informs his character much as the minute attention to fashion indicates the lack of interior life of Patrick Bateman, the cipher who narrates Brett Easton Ellis’s American Psycho. Indeed, Thunder’s precision in regard to fashion (one remembers the Cuban heels that so impress the adolescent) and music (another leitmotif of identity throughout Jordan’s fiction) comes to define him for the reader.

Throughout, Jordan’s intention in Mistaken is existential rather than Gothic, though it wears its philosophical underpinnings lightly. The motif of presence versus absence is suggested when the narrator spies on Dominique shoplifting in Hodges Figgis, and intuits from an empty space on a bookshelf that the book lifted was (what else?) Sartre’s Being and Nothingness. Elsewhere, indeterminacy in the form of Schrödinger’s cat puts in a brief appearance, though quantum physics rapidly changes into QANTAS. (Heisenberg’s Uncertainty Principle makes a comparable appearance in Sunrise with Seamonster.) The lack of insistence that underlies such episodes is characteristic of Jordan at his best.

The main resonance of the Stoker address is presumably that vampires are shadow creatures lacking in identity who feed parasitically on the living for lifeblood. Throughout Mistaken, Thunder and Gerry Spain feed insidiously on each other’s identities—Spain even uses Kevin Thunder as his pen name. In one cinematographic image, Thunder sees his reflected face superimposed on a computer-screen image of Spain’s ageing face, like a Dorian Gray from cyberspace.

Mirrors and reflections play a considerable part in the novel. From the novel’s opening at Spain’s graveside, we are aware that the interaction between the doppelgangers can only end badly, and, without giving the end away, the violent climax is prefigured when Thunder catches a glimpse of ‘a mirror fracturing our bodies’ on the way up to the fatal flat. But the violence has already been awoken in the horrific assault on the unfortunate Darragh (what’s in a name?) when she mistakenly links up with Gerry rather than Kevin. The portrait of her complex, fragile personality is a particularly fine and moving achievement.

To an extent, the doubling at the heart of the novel is a device which allows Jordan to explore the multiple-personality of a schizoid city. While the narrator grows up in Marino, attends the CBS and goes to Bolton Street, his twin grows up in Palmerston Park, attends Belvedere and goes to Trinity. However, Mistaken is nowhere marred by the obvious caricatures that populate so much Irish fiction purporting to deal with class. Thus it’s Gerald rather than Kevin who skips bus fares, ‘jiggers’ the amusements, smokes and shoplifts. The Dublin of Mistaken is a nuanced portrait, more likely to focus on the shades of difference between the two Bewley’s Oriental Cafés than the tired Northside-Southside divide. Indeed, the divide between past and present is more pertinent and persistent than any defined by the Liffey. Refreshing too is the lack of misogyny attending the description of the privileged Dominique (Spain’s Trinity girlfriend), whose portrait is drawn as sympathetically as that of tragic Darragh (Thunder’s Bolton Street girlfriend). This is all the more remarkable when one considers the class background and sexual opportunism of the narrator. Mistaken has already been (predictably) dubbed Jordan’s love letter to the city. More accurately, it’s a love letter to the many troubled shades that haunt memory.

David Butler’s third published novel, 'City of Dis' (New Island), was shortlisted for the Kerry Group Irish Novel of the Year, 2015. His second poetry collection, All the Barbaric Glass, is due out in March 2017 from Doire Press.