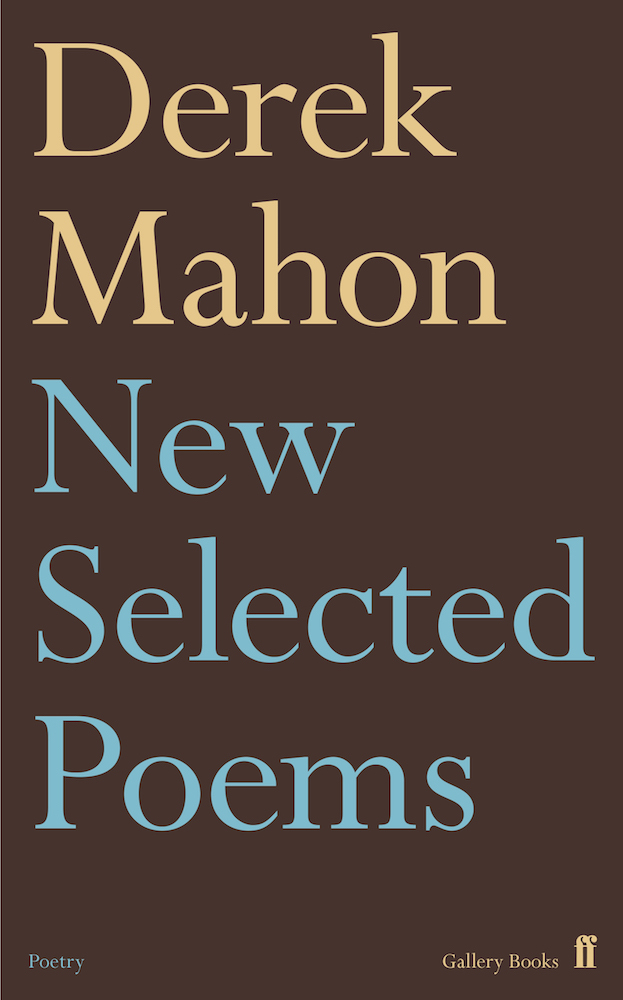 A book of departure, of dreams and nightmares, and of returning from the shape-shifting terrain of nocturnal imaginings—think Ovid—to the sober light of day, Derek Mahon’s New Selected Poems is a masterful collection in every way. Like Ovid, Mahon has found himself, throughout his life, in a kind of exile. In ‘Afterlives’, which is dedicated to the late James Simmons, the speaker of the poem (it’s safe to assume it is Mahon, as the speaker often is) berates himself and Simmons:

What middle-class shits we are
to imagine for a second
that our privileged ideals
are divine wisdom, and the dim
forms that kneel at noon
in the city not ourselves.

There’s a touch of Larkin in the plain-spoken vernacular of Mahon’s early work, a striving in poem after poem to achieve a clarity, directness and honesty, but also something else—a desire to create a poetic crossing or transcendence of some sort—which very often expresses itself in rueful resignation, an existential displacement. ‘Afterlives’ speaks centrally to the challenge Mahon has faced as a poet during his lifetime, namely leaving Belfast during the time of the Troubles, and how that first departure has problematised his relationship to Ireland, both north and south, and to his own poetics:

Perhaps if I’d stayed behind
and lived it bomb by bomb
I might have grown up at last
and learnt what is meant by home.

The ‘might have’ is important, again more so to the earlier work, the conditional ideal set in stark contrast to what actually is. Home is a recurring motif in Mahon’s work, and there’s certainly a restless energy about his lines, as if when having left the first, original home-place, it could never be recovered again—a kind of recurring Fall: ‘if a thing happens once / it happens once forever’. In ‘A Quiet Spot’, ‘after so many a fugitive years / of travel’, we’re told that:

That restlessness was never given a corresponding formal manifestation however. Rather, there’s a reassuring, steady and regular metre and rhythm to many of Mahon’s lines, a solidity to his stanzas which carry with them the lucidity and purposefulness of a classicist. There’s something of the elegant architectural facade of the stanza in his work—and with that robustness there is a preservative power. It is as if the stanza itself is not just a room to house each segment of poem, but protects the words within, lends them a salutary endurance, so that the stanza can withstand the elements, time itself. There’s ‘A Garage in Co. Cork’ with its ‘thinly / peopled hinterland’ and ‘cracked panes’ revealing ‘a dark interior echoing with the cries of children.’ And of course, ‘A Disused Shed in Co. Wexford’ with its unforgettable ‘expropriated mycologist’. Abandoned structures which contain history, pain and sorrow appear as actual, and psychic, landmarks. Often, the pain is personal. The resignation found in a poem like ‘Dawn at St. Patrick’s’—echoing Lowell’s ‘Waking in Blue’—is particularly moving:

Light and sane,
I shall walk down to the train,
into that world whose sanity we know,
like Swift, to be a fiction and a show.
The clouds part, the rain ceases,
the sun casts now upon everyone
its ancient shadow.

With the recent publication of After the Titanic, Stephen Enniss’s biography of Derek Mahon, it’s difficult not to lend a biographical context to the poems, which is interesting, to a point—more so for the trajectory of poetic preoccupation rather than anything else. So New Selected is a book of praise, of love, and acceptance, containing many anthologised and familiar Mahon classics. The accomplished villanelle ‘Antarctica’ is here, a fabulous display of technical bravura, with the memorable refrain: ‘At the heart of the ridiculous, the sublime.’ Other canonical poems are somewhat altered from their previous versions. ‘Carrowdore’, the moving elegy for Louis MacNeice for example, appears to be changed quite dramatically from what it was, at least in the Collected. This is the poet’s prerogative, of course, an effort, perhaps:

to go back at last
beyond irony and slick depreciation,
past hedge and fencing of a clearer vision,
time to create a future from the past,
tune out the babbling radio waves
and listen to the leaves.

The act of revision in Mahon’s work—here we go again—reminds one of Auden’s and / or dilemma in ‘September 1st, 1939’—the later Auden revising his line ‘we must love one another or die’ to ‘we must love one another and die’ before disowning the poem altogether as false and dishonest. Critics will craw over ownership and authority. But this reviewer accepts the work as something fluid—a moveable feast—while at the same time wondering at the how and why of what feels like yet another greatest hits. After the Selected, Collected, and New Collected which have preceded this latest offering, it’s impossible not to ask why now a New Selected? And yet, the juxtaposition of new work alongside old does allow the prism of each poem to refract in new ways. Another answer, and another thing to simply celebrate, are the new poems—and the final poem in the collection in particular, ‘Dreams of a Summer Night’, which suggests a poet who was ‘late in finding rest / and harmony,’ a master, after all, who tells us: ‘poetry is a real mirage / in an unreal world of cash and babble’:

Back here from dreamland with a dewy leaf
to keep me right and ward off disbelief
I await the light we were born to love:
birds at a window, boats on a rising wave,
light dancing on dawn water, the lives we live.