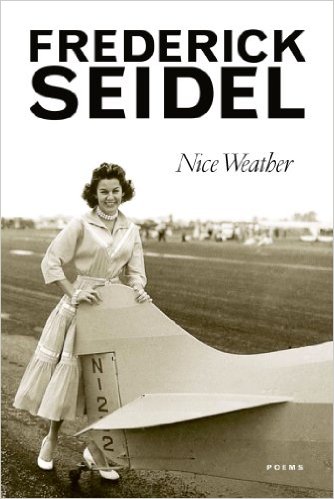 In his new collection Nice Weather, Frederick Seidel can sometimes sound whimsical and flippant; at other times, he is deadly and frighteningly serious. Seidel is a fascinating, infuriating and complex poet. His mordant wit is everywhere from the leap ‘The Terrible Earthquake in Haiti’ takes from its title to its first line—‘I think the truth is I have to go to the dentist’—to the blank assertion that the ’usual liberal bs’ is not something he cares much for.

The humour in Seidel’s new collection is black and at times chilling. A persona poem ‘In Midwinter’, ‘where Midwinter murder is in my heart’ is not untypical:

Patent leather makes my shoes
Easter eggs by Fabergé.
The shoes say New York is still run by the Jews,
Who glitter when they walk, and aren’t going away.

Seidel is a formalist; think Henri Coulette without the charm. He uses rhyme and strict, regular metre, but takes ‘considerable pleasure in violating those norms’ (Paris Review, Fall 2009). There’s nothing ‘New’ about Seidel’s formalism, other than the ironic, menacing and misleading patter to the iambic machinations of its lines. Born into a wealthy Jewish family in St. Louis in 1936, the poet shares his home town and Harvard as an alma mater with T.S. Eliot, whom he once met at the Faber offices in London and whose picture hangs in the poet’s New York apartment. New York itself appears time and time again in Seidel’s new collection. Central Park is a regular point of reference. In one poem the leaves on the trees in Central Park are popping and ‘there’s too much joy. There’s no stopping. / Love’s on top, fucking pain.’

Described once by the New York Times Magazine as the ‘Laureate of the Louche’, Seidel’s loucheness is less appealing to some than others. The Paris Review has referred to his poems as ‘disagreeable’ and while writing about his considerable wealth, his penchants for expensive hotels, hand-made motorbikes, and sex with much younger women may have turned many off his work, he remains a poet to be reckoned with. When his first book, Final Solutions, was selected in 1962 by Louise Bogan, Stanley Kunitz and Robert Lowell for an award sponsored by the 92nd Street Y, the publisher and the Y rejected the manuscript because the ‘matter in one of the poems libeled a noted living person’, and, secondly, the poems were thought to be ‘anti-Semitic and anti-Catholic’, by the head of the YMHA/YWHA. The judges resigned and the collection was published the next year by Random House. The experience was a defining moment in Seidel’s life and it was nearly eighteen years before his next book Sunrise appeared, in 1980—this time to win the Lamont Poetry Award. Since then, Seidel has gone on to publish numerous collections including a Collected Poems from FSG in 2009 that gathers together half a century’s worth of work. The longevity reminds you that Seidel was there when Ezra Pound was incarcerated in Saint Elizabeth’s. In his Paris Review interview, Seidel says, ‘I got Pound to recite poems by Arnaut Daniel and Guido Cavalcanti and Guido Guinizzelli. It was wonderful to see him tilt his head back and orate the poems in this very old-timey way. We got on very well.’

Although Seidel’s Jewishness was not a barrier between the two poets, Pound’s actual work was less of an influence than Lowell’s, whom Seidel also befriended after interviewing him for, again, The Paris Review. With each book, Seidel began to outgrow Lowell’s influence, and his work took on a more politically overt mantel. Now in Nice Weather, he writes with bravado about elections, presidencies, and even the environment: ‘The shorebirds and the shellfish make merry in the giant oil spill’.

He tells us in one poem he is not happy with ‘The President of the United States’ and in another that the ‘Republican and Democrats, [are] the nude / Alternatives to naked solitude.’ Seidel is not adverse to tripping down memory lane either. In ‘Back Then’, he writes:

Negroes walking the white streets
Was how it seemed on Manhatten’s Upper East Side.
One morning in 1971 it began.
I converted so to speak on the spot to the Ku Khlux Klan.

Seidel ends the poem by writing, ‘I know the man who wrote this poem’. This ruthless scrutiny of the culture and the self’s place within it is a recurring theme in his work. Seidel describes Montale’s poems as ‘a swaying rope ladder descending from some very high place’, and his own poems sway under the formal and moral pressure he puts them under, even if, sometimes, the rhymes in his work are perfunctory and the matter occasional or self-pleasing. There’s an insistence on how the poem struts and an obstinate assertion which often reinforces the ‘beautiful pointlessness’ of the pursuit. ‘I don’t believe in anything, I do believe in you,’ he once wrote. In another poem, mischievously entitled ‘Poems 1959-2009’, Seidel writes, looking back at his life’s work, that:

You know the poems. It’s an experience.
The way Shylock is a Shakesperience.
A Jew found frozen on the mountain at the how long summit,
Immortally preserved singing to the dying planet from it.

Seidel’s poems are performative, sardonic, scathing, brutish, arrogant and piercing. They can also be very funny. In ‘Pretending to Translate Sappho’, the undermining and rueful title gives way to the opening lines: ‘The mother of the woman I currently / Like to spank, I’m not kidding, / Was my girlfriend at Harvard.’

Seidel once said he likes ‘poems that are daggers that sing.’ At other times, his ambition is as a more incendiary satirist. Take for example, the poem, ‘Rainy Day Kaboom’:

Welcome to South Waziristan.
I’m the Taliban.
I wrote their poem ‘My Poetry.’
I meant it as an IED.
O say can you see me driving over it up-armored.

In Nice Weather, Seidel remind us that ‘the performance self opens the stage door’:

Sieg Heil!
I said that to make you smile

and what makes Seidel such an interesting poet is that when you read his poems, it very often feel less like a stage door the poet or performance self opens and more like a trap door you, as the reader, are being pushed through by the entreating, graceful, but terrifying gentleman with the dagger.