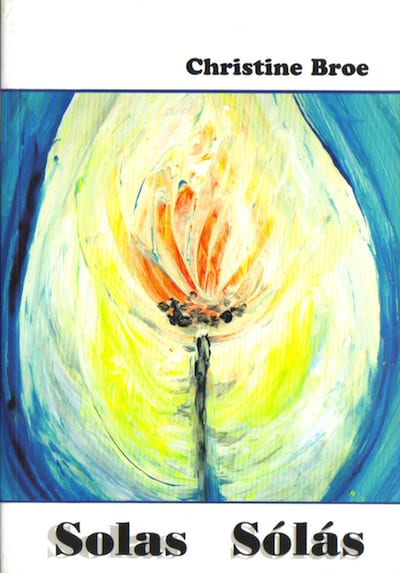 Two strong debut collections by Irish female poets are the focus of this review. Both poets are very much concerned with the idea of memory, but examine it from vastly different perspectives. Emily Cullen uses past experiences as inspiration, while Christine Broe tackles the difficult subject of Alzheimer’s Disease.

With No Vague Utopia, Tipperary-born Emily Cullen has produced a gem. The collection spans many areas of her experience, from her days as an undergraduate to her involvement in various facets of artistic life, at home and abroad. Her themes surround recollections and ephemera, paeans to moments in time, vividly recalled. Her language is rich and vibrant, and her metre musical and textured. While each poem is a personal expression of one woman’s experience, Cullen’s ability to vividly describe and render these experiences ensures that her readers can recreate each moment with her.

The collection’s title poem refers to a poem written by W.B. Yeats, ‘In Memory of Eva and Constance Gore-Booth,’ in which the celebrated patriarch of Irish letters reminisces about earlier days at Lissadell House. His poem eulogises a time of cultural and politicalchanges in Ireland, a time when many members of the Ascendancy were at the forefront of movements for social change. In Yeats’s memory, the more famous Constance and her deeds take primary importance, whilst Eva is portrayed as a dreamer.

In her poem Cullen attempts to redress the balance in favour of the younger Gore-Booth, and to highlight that she, too, was a woman of action. Yeats’s wife, Georgie, often acted as a medium to her husband, reporting tales and visions from beyond this world, and many of these inspired W.B. in writing poetry. Cullen plays upon this by assuming the guise of medium, thus allowing Eva to have the last word about her life. To Yeats’s lines: I know not what the younger dreams / Some vague Utopia, Eva can now reply:

True, I did not agree
with Con’s leanings toward war,
nonetheless I, too, could be aggressive:
crying for rights of women workers,
– I even addressed Churchill once –

The poem documents Eva’s deeds and brings them into the light of public attention, so that the younger Gore-Booth is no longer compelled either to rest in her sister’s shadow, or to be remembered in literary history purely as Yeats’s kimono-clad, shy dreamer.

Wit flows through other poems in this set, such as ‘Ms. Bacchanalia’ which describes the drunken antics of a nameless lady, or ‘Tornado Warning,’ which describes a poetry workshop at Southern Illinois University. In the latter poem, Cullen effectively conjures an image of a shared experience breaking down the formal barriers between strangers:

The poem ‘Ellipsis’ captures the spirit of Cullen’s work, concerning itself with nostalgia, and the realisation of a wonderful or important moment in retrospect. Here she muses that if we knew the importance of such moments in advance, we could enjoy them as they happen all the more.

Through much of her poetry, Cullen captures recollected moments and infuses them with significance. Her poems are vivid, so that the reader moves with her through the fresh country air in ‘First Pillion,’ and can sympathise with her nervousness in ‘Performance Anxiety–Meetingitis.’

‘The Christmas Craft Fair, R.D.S., Dublin’ looks beyond our desire to purchase original presents, and examines instead the harsh conditions behind the production of many of the ethnic gifts available on shop shelves, and the human cost:

In this enjoyable and evocative collection, Emily Cullen has indeed found her ‘Madeleine cake’ – a footnote to the poem ‘To an Aesthete’ describes how Proust was visited by memories and inspiration upon consuming the small French confections.

WHILE MANY OF CULLEN’S POEMS have an episodic quality, Brae’s poetry is airy and dreamlike, but also a personal record documenting many of the tragedies facing women who are in the position of being primary care givers in difficult situations. An art teacher from Dublin, Christine Broe has won many awards including the Brendan Kennelly Sunday Tribune Poetry Prize in 2001 and the Italian Citta di Olbia Award in 2002. The title of her first collection is a pun on the Gaelic word solas (light): when the vowels are accented, the meaning of the word becomes consolation. Brae’s poetry shares this ability to be two things at once. It often has an ethereal quality, but it’s equally capable of accurately pinning down a description of a particular image or state of mind.

‘The Tear Trees’ falls into the first category, with its dreamlike reverie on the beauty of nature, on the ability of something as simple as water droplets on a tree to distract the mind from troubles. The comparison between raindrops and tears is carried on through the final verse:

We distract ourselves with beauty,
suspend grief, suspend fears,
and we never even mention
our own reservoir of tears.

Many of the poems here are inherently sad. The latter section, Sólás, deals almost exclusively with the author’s grief and frustration at her mother’s Alzheimer’s Disease. However, often this is coloured by a blackly comic touch, which refuses to ignore the levity of certain situations. In ‘Big Al,’ for example, Broe describes her mother’s behaviour:

Since she’s started this affair with Al
she collects the oddest things.
Spoons, bananas, and toilet rolls
in our house have sprouted wings.

Later in the poem, this hoarding of everyday goods is compared to similar behaviour by Brae’s friend’s mother, also suffering from Alzheimer’s:

Eileen says her ma’s the same
but that woman’s got more class,
under Al’s strange power, she
nicks Waterford crystal glass.

Frustration at the condition comes across in poems such as ‘Holy Thursday,’ with its final couplet of:

I washed her feet, and I prayed
that this woman would be taken from me.

This theme of wishing for a release for her mother comes through in Salas’s other poems, as Broe examines the cruelty of a disease which forces sufferers to live in an inaccurate present, cut off from their past and their loved ones and shared memories.

‘No Placenta For Dying’ is probably the most heartfelt expression of the pain caused by Alzheimer’s, as Broe builds upon John Berger’s idea that, as one gets older, the past grows around one like a placenta for dying. If the past acts like the safety of the womb, Broe considers the effects of this on her mother, who, without her memories is denied the comfort of the past:

Helpless as our images
framed on her locker,
we watch
and there’s no way to deliver her
from this aborted death.

Other poems deal with a diversity of subjects, from the sentimental value of a stolen watch in ‘Stolen Times,’ to the birth of a child in ‘Cribs.’ This latter poem compares the real experience of giving birth with the masculine-imagined images of the Holy Nativity, where a newly delivered mother is capable of kneeling beside a crib. The pain of miscarriage is identified in ‘Naming the Sorrow,’ a poem raw with a sense of loss and grief.

‘A boy!’ on the other hand, celebrates the birth of a baby boy in Holies Street. Born under the same ‘coincidence of stars’ as Christ, this child doesn’t receive shepherds or wise men bearing gifts, but instead his mother sees that:

…pigeons came from Ringsend
to coo on the window sills
and the morning light lay gently on me
and lit the orchids tied in blue.

The act of artistic creation also comes under interrogation. In ‘No Poem,’ Broe contemplates writer’s block, when an over-active mind produces nothing:

In a state of too much mind
where do I find

‘Poetic phrases 5 for 50p’ contemplates the flip side, or the result of too much poetic endeavour, and questions the idea of discarding the ‘amputated clauses/ and orphaned phrases’ left over from the editing process, remembering a former art teacher of Brae’s who salvaged silver slivers for recycling.

Solas Sólás is a deeply personal but accessible and vibrant collection, full of light and shadows in tum. Many of the themes are emotionally raw, but this is lightened by a steadfast sense of humour. A thought-provoking, sometimes troubling, but always heartfelt, debut.

Paula McGeever has a degree in English and an M Phil in Irish Theatre and Film Studies, both from Trinity College. In 2003 she won an Honourable Mention from College Green magazine, in association with the Irish Writer's Union, for a short story. She also reviews for Inis magazine.

sleeping with an atheist