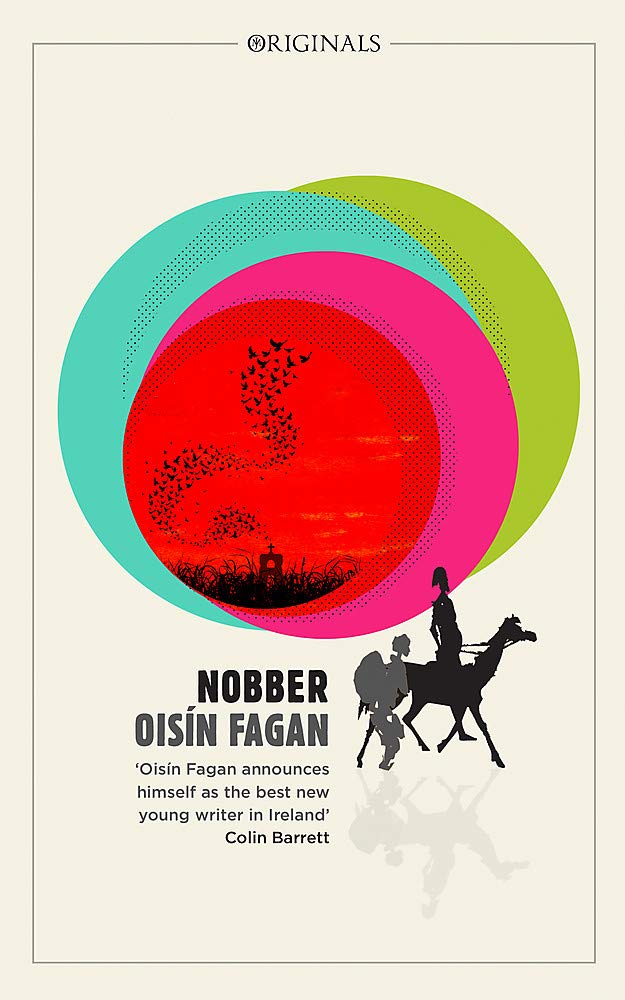 In a 2016 interview the documentary filmmaker Adam Curtis complained of prevailing tendencies in the novel. ‘They’re all written from the internal voice… The thing of our time is: what goes on in my head, what I feel and what I want and what I desire, minute to minute, second to second is real.’ This, for Curtis, is a symptom of ‘hyper-individualism’, an obsession with ‘self-expression’, with ‘being a true individual and expressing yourself authentically’, which he sees as the neoliberal conformity of our age. Oisin Fagan’s capacious and bloody debut novel Nobber risks the charge of inauthenticity—it does not conform. Here, we are, to borrow a phrase from Fredric Jameson, in the ‘space of the ruined collective.’

It is the plague year of 1348. Sir Osprey de Flunkl, a young Norman ‘who wants everything he sees’, makes his way with a small retinue from Trim to Nobber. With the aid of his ‘serving men’ and ‘the deepest sickness’, de Flunkl has been acquiring property. He is accompanied by Harold Tuite, ‘all crooked and bent over with the heavy sack… weighted down with the sins they filled it with in Trim’; William of Roscrea, a tactful interpreter of Mountain Gaelic; and Saint John of Barrow, ‘the fourth, the youngest, and the least of the retinue’, who spends much of the narrative in hallucinatory confusion brought on by eating psychotropic mushrooms. They soon encounter a small group of Mountain Gaels, bearers of an imputed, primitive nobility – the ‘steadfastness of their stance, the steadiness of their breaths’. The Gaels’ skin and hair and the wooden figurines that hang from their necks are described with a fascinated anthropological precision.

In subsequent chapters, we follow the retinue’s progress as de Flunkl’s flimsy authority falters, Saint John’s behaviour grows more bizarre, and William’s fear and Harold’s sorrow emerge. We meet the cowering, housebound inhabitants of Nobber, and glimpse various other characters as they skirt or converge on the town. We follow the mounting effects of the plague: people get sick, mourn loved ones; they fear, or sometimes crave, infection. The sickness is depicted with a detached but impactful eloquence: ‘That pain… swells the energy… before weakness and shivering disable the infected permanently and the armpits swell to the size of autumn apples’. The plague is a leveller, respecting no rank, and the keepers of the old institutions – the mayor, the monks and the local priest – have fled, seeking survival or more lucrative opportunity elsewhere, as the rich fall ill and turn to religion in fear of the end times. Capitalising on this, an outsider – ‘the man’ – has taken control of the town.

There is a proliferation of personages. Individualised psychology is rejected in this portrayal of threatened interdependence. Characters are distinguished by name and physical appearance, but mostly by their relation to other beings, human or inhuman, living or dead. Raghnailt is haunted by a dead father whose public disgrace she has inherited and continues to bear. Colca, her son, is an outcast sexual deviant using the sickness to exert power and exercise his appetites. His wife is a Gael, traded into marriage. ‘The man’ keeps a ‘lunatic child’ chained to an inner wall and uses her as his wife. A young mother is full of shame that she cannot breastfeed her baby. Hacquelebacq, who ‘likes to possess things others have not’, leads a retinue of animals towards Nobber. A penitent wife craves forgiveness from her dying husband. A picture forms of social fragmentation, of a populace who fear siege and contagion, of a hellish town in its doom. When de Flunkl’s men arrive in Nobber, it is a town from the parched anti-westerns of Sergio Leone or Sam Peckinpah, a lawless space of empty streets, boarded windows and dust. When an old man is beaten and his eye pops from its socket the event is met with manic laughter. When the Gaels come, they come with painted faces, riding side-saddle. There are long drawn-out death scenes, calm last words: ‘I enjoyed our discussion this morning.’ The western is not the only popular form that Fagan draws on: the devices of 19th century suspense – unexplained objects, mysterious signs and incidents, blatant cliff-hangers, a drop of blood – add momentum as the spare plot moves toward its final salving catastrophe.

The town is the protagonist. It suffers, beckons and repels, lives in fear, requires hope and salvation. There is no picaresque adventurer, no tragic or comic hero, no wide-eyed or knowing reporter, no self-seeking individual, learning or maturing or growing disillusioned. Through its overlapping voices and subtle shifts in point of view the restlessly complicated narrative denies any distinction between subjective and objective, between individualised feeling and external circumstances. Dramatic irony is for the most part maintained, calling into question every utterance, its source and status. Voices are composite, multiform. In the opening line: ‘Osprey de Flunkl…whom you will call Sir’, a direct address to the reader doubles as an instruction from de Flunkl. We move from William’s impression of this ‘Osprey fool’ to his sense of Harold’s hatred for the young man, to a description of William’s appearance: ‘tall, slender and pale, with sunken cheeks of a sallow colour.’ The illness itself seems to speak: ‘Another dark room, a different one, but I am grown sick of them.’ The town’s exploiter describes in disappointed tones the peasantry’s failure to see the potential in mass power.

Nothing is only itself, nothing is discrete. Characters are possessed. Raghnailt feels fear like an ‘animal in her chest’. Bodies are altered by act and environment. They sweat, seep, bleed, and crawl with insects; they are bitten, swell, scar and scab-over; they grow rashes, sprout hair, sport animal skulls. Human bodies couple and merge – with earth, trees and plants, with animals, with one another. They wear the marks of work, violence and childbirth. Pollen and dust cling and coat; smoke blackens legs and arms. Webs and networks proliferate. Nettles ‘form complex symbiotic knots’, a ceiling is ‘enshrouded in its dipping, inverted mountain range of cobwebs.’ Branches and trees overlap, entwine, meld. De Flunkl is disgusted by the Gaels’ ‘hybrid hermaphrodite wantonness’. Their paradoxical ways confound him. They are ‘ferocious in times of calm and mournful during feasts.’ Plague amplifies the confusion.

In interviews Fagan has refused to kill off his novel by being drawn on its contemporary parallels. ‘I try to resist the impulse to make it about today’. But impulses are hard to resist. Those profiting from the sickness resemble disaster capitalists. The plague, de Flunkl boasts, ‘is a gift to one as adroit as me.’ ‘The man’ and his advisor de Fonteroy make use of the terror. A curfew keeps the townspeople isolated, decrying their neighbours’ imagined misdeeds, engaging in malicious gossip. Expansive trade, conquest and migration are invoked. Andalusia is a ‘Moorish place’. Manx, Gaelic and ‘smattered smidgeons of Catalan’ are spoken. Measuring herself against a perceived norm, Dervogilla feels envy and shame at the ‘quiet joy and motherly arrogance’ of other young women. Foreign symbols and signs, stories of unseen places and odd ways, cause anxiety and fear. The climate too is fearful. Nobber shares with a certain type of western the prevalence of very bright, harsh light. It does not bring clarity. It comes in shards, spangles and blasts; it blurs, scintillates, dazzles and blinds. It ‘seems to bend in murderous ways.’ We hear of ‘a coming generation that will not arrive’. Most of all, Nobber is drenched. Though the land is dry – it has not rained for some time – the novel is awash in watery metaphor and image. This evocation through absence brings immediate devastating visions to mind. Reading of the ‘great oceanic noise’ in the trees, I suddenly saw a flooded forest. Noah gets a mention. A man speaks ‘with the sounds of lapping water.’ Walls drip, a crow rests on a pig ‘like an anchored ship bobbing on the sea.’ The Lord rains blessings. Violence pours. Sweat comes in oceans, as do flies and spiderwebs and ants. There is a ‘flood of talking’. A fly drowns in its own fluids. The woods gurgle. Madness is like a veined river. Prior to the short coda, the narrative concludes with an ambiguous image of falling rain. The whole novel is inundated.

While Nobber is not a work of historical re-enactment, Fagan invents a convincingly plausible language for his depiction of catastrophic change in late medieval Ireland, a language sufficiently supple to convey an array of sense, feeling and event, from extreme violence to the moments of calm pastoral beauty that serve to counteract and emphasise the swelling horror. There is a systematic balancing, particularly rigorous in the opening chapter when the retinue speak among themselves, of Anglo-Saxon and Latinate vocabulary. For  example, Harold Tuite says: ‘Regarding merit, health, humours, character, loyalty, am I not worse than so many perished?’ The verbs and nouns derive primarily from Latin through French, while the adjectives, adverb, conjunctions and pronouns have Dutch and Saxon origins. This productive collision and merging of an official language of concept and order with an earthier speech of perception and sense sustains the tense clash of creative destruction. This is complicated by a wily use of anachronism which draws on the progress of history from the 14th century to today. A Gaelic figurine’s ‘apelike arms’ bring to mind the 19th century racist cartoons in Punch magazine depicting ‘Paddy’ as a simian. A character has pre-Reformation sentiments of ‘a popish nature’. Phrases like ‘enterprise’ (15th century), ‘pussy’ (16th century), ‘cubbyhole’ (1820s) and ‘surreal’ (1917) call up a changing world of economic practices, sexual and gender politics, and art. By conjuring such a vivid world out of time, Fagan can examine our present predicaments while suggesting that these predicaments, for the most part, are not so new.

For all the energy in the writing, at times Fagan risks boring the reader. Passages seem overwritten, distended, until their purpose becomes apparent. De Flunkl makes a fourteen-line speech on meeting the Gaels. They counter by mocking Norman ways at great length. They really do go on, but what else had people to do in the 14th century but talk? There are repetitions whose function eludes – ‘corner of the eye’, for instance. There is the jarringly contemporary, which at times coincides with a waning energy: ‘Why are you being so mean to me?’ Sometimes the dramatic irony lapses and a line seems to betray the author’s attitude. Property is said to be the first sin; someone complains of ‘Too many opinions and not enough food’. These moments are few. More often, we see a gift for euphonious, even risky, precision: ‘too much plenitude’.

This is not a modest work. Implicit in its form, tone and effects is an argument for what a novel should be or do. There is no search for individualised meaning, or simulated drift of consciousness. With its focus on commonality Nobber bears affinities to Kirsty Gunn’s The Big Music (2012) and Jon McGregor’s Reservoir 13 (2017), to Faulkner and Garcia Marquez. In his work’s insistence on the awesome unknowability of the world, of past and future, of other people and ourselves, of the workings of love, hate, fear and desire, of the perpetual coexistence of pain and joy, Fagan gives us a book at once shocking, sad and wise, one which looks boldly at the mysteries of life, and leaves them beautifully intact.

On the outskirts of the town, the retinue come across a strange object – ‘a monstrous… thing’, ‘deeply weird’ – and speculate as to its nature and function. ‘I do not know what it intends to portray,’ Harold says, ‘but whatever it is that it does portray, it portrays it mightily. It does not fit into anything, though it does at the same time seem to remind me of everything.’ The novelist’s ambition is clear. On the evidence of Nobber, it does not seem misplaced.

David O'Connor is a writer and reviewer working in Dublin.