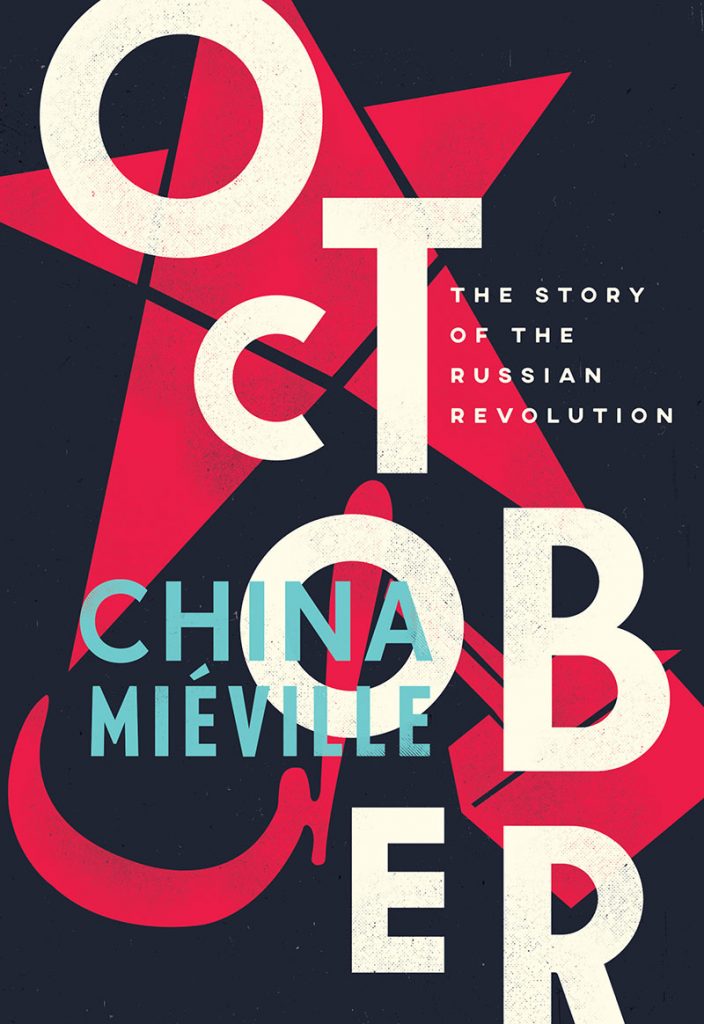 October: The Story of the Russian Revolution

There is a telling passage in the epilogue to China Miéville’s wonderful October which reveals exactly why this book is captivating, engrossing, fascinating and even inspiring. It comes as the author discusses the novel What Is To Be Done (the title of which is echoed in Lenin’s famous essay of the same name):

For those who cleave to it, a paradox of actually existing revolution is that in its potential for utter reconfiguration, it is, precisely, beyond words, a messianic interruption – one that emerges from the quotidian. Unsayable, yet the culmination of everyday exhortations. Beyond language and of it, beyond representation and not.

It is a beautiful description of that moment when everything is possible for people for whom the world was hitherto a near impossibility. This, we think, is a writer for whom revolution can be a good and necessary thing, for whom the Left is a living, changing and positively charged force. No milk-and-water liberal, happy to settle for incremental improvements in the living standards of the poor coupled with the gross enrichment of the global elite, but a full-on socialist, Miéville is, in fact, a political activist with his own deep appreciation of socialist theory evident not just in his grasp of the historical detail but in passages such as the above with its nod to Walter Benjamin (the messianic). Throughout October one senses this fascination with left-wing thought, with the seemingly insignificant points of theory and practice that divide left-wing parties, sometimes (but not in this instance) fatally undermining the chance of creating change – whether, for example, a party believed (in the Russia of 1917) that a bourgeois revolution had to be first completed in order to create the conditions for a proletarian one; whether Russia would or could ever have either kind (not having any kind of developed bourgeoisie which might actually take power, and not much of a proletariat either); whether a piecemeal democratic revolution was possible or desirable; whether it was better to win the war against Germany and reiterate the Tsarist or Bourgeois liberal phase or to lose it and precipitate a revolution or chaos; whether socialism in one country could survive without a global socialism.

These are not, of course, insignificant differences in any sense and have serious consequences in the actual moment of revolution. The great fear of many devout adherents of the necessity for a bourgeois revolution before a socialist one, for example, was that a preemptive socialist revolution would fail because the material conditions for it did not exist, and that failure would postpone the true revolution for generations. It may well be that the Russian revolution itself, or its aftermath, has had something like that effect for the rest of the world.

Leo Varadkar recently asserted in the Dáil that there was democracy in Russia before the revolution. I’m not sure what he means unless he regards the shambles of competing elite interests that produced the weak and histrionic Kerensky as some form of democracy. But in the late summer of 1917, Russia was having its bourgeois revolution. Unable to resolve the conflicts between the industrial and landed classes and the workers soviets, threatened by rightwing forces in the army, especially the brutal and egoistic General Kornilov, and fatally committed to the war, that revolution was doomed from the start. Kerensky, in fact, slipped easily enough into manoeuvring for dictatorial powers under threat, something that Varadkar’s party would be familiar with from its own history. Perhaps Kerensky’s greatest mistake was in believing that it was necessary to continue fighting the Germans. The peaceful liberal paradise he dreamed of could only be achieved over the bodies of hundreds of thousands of Russians and Germans.

Casual criticism of the revolution generally overlooks the material conditions in which it took place. The Tsar was long gone, having been overthrown by workers, soldiers, sailors and peasants, by trades union, by the various left factions including anarchists and Mensheviks – but not by the Bolsheviks because they were a tiny fraction of the left at the time. Nevertheless, several months later, when Kerensky and his administration was falling apart in ignominious betrayal of everything they had promised, the Bolsheviks had come to represent vast swathes of the revolutionary working and peasant classes. This was in great part due to Lenin’s drive, his sense of timing and his intelligence. But also to the fact that the workers, sailors, soldiers and peasants were not prepared to settle for another Kerensky or a Kornilov, and certainly not the return of the Tsar or any of his family, or the continuation of the war, and ultimately the Bolsheviks were the only people who were unreservedly against all that.

Miéville has a novelist’s sense for the dramatic which makes his history a delight to read. He never fails to find the kernel of a situation which reveals its truth. Here is an example (again from the epilogue). The time is that indeterminate post revolution moment. The Winter Palace has fallen, the petty dictatorship that established itself when Kerensky fled has been arrested, the city of Petrograd, capital of Russia, is in the hands of the soviet. The Bolsheviks are the acknowledged leaders of the revolution, but there are anarchists and other leftists involved too. We have been led to this point by a history that delights in detail about the shifts in power and personality not only on the left, but throughout Russian politics. We have witnessed the agonised and chaotic days of the revolution. The scene now is the hastily convened Congress of Soviets, with representatives from all over Russia, a majority in favour of the revolution, party activists from the many leftwing parties and factions, representatives of peasants, workers, soldiers, sailors:

Late evening of 26 October 1917. Lenin stands before the Second Congress of Soviets. He grips the lectern. He has kept his audience waiting – it is nearly 9 p.m. – and now he waits himself, silent, as applause rolls over him. At last he bends forward and, in a hoarse voice, speaks his first, famous words to the gathering.
‘We shall now proceed to construct the socialist order.’
That provokes new delight. A roar.

What he captures here, after three years of the unrelenting misery of war, of deaths on a massive scale, of starvation, of political and economic ruin, of hope and despair and then hope again, is the declaration of a worker’s republic, the instant when a people realises that the future is, incredibly, unexpectedly in its hands. A moment of immense possibility, but one that ordinary people and even revolutionaries hardly dared to imagine as a reality. And what is the immediate result of their revolution?

And in the medium term, what effects did revolution bring:

a shift towards workers’ control of production and the rights of peasants to the land. Equal rights for men and women in work and in marriage, the right to divorce, maternity support. The decriminalisation of homosexuality, 100 years ago. Moves towards national self-determination. Free and universal education, the expansion of literacy. And with literacy comes a cultural explosion, a thirst to learn, the mushrooming of universities and lecture series and adult schools.

It didn’t last, of course, as we know, but for more complex reasons than the usual cynical right-wing argument that power corrupts. Firstly there was the fact of the Civil War, conducted by proto-fascist murderers funded by the West, the fact of armies in the field from Britain, France, the USA and their erstwhile enemy, the terrible Hun, all of whom sought to shut down the workers’ republic and reinstate the old brutal order.

The workers responded with a fierce defence of their revolution, of their future. It’s fashionable to say there were atrocities on both sides, which is true, but the Whites had a scorched earth policy; they took no prisoners, and carried out mass exterminations. Whatever the mistakes and brutalities of the Reds, they had nothing like that ferocity. One American officer in the field estimated that the forces of western-style liberation killed one hundred civilians to every one killed by the Red Army. It is fascinating to speculate what would have become of the revolution if the West had simply yawned and said ‘Get on with it’ – though of course they had their own revolutions to worry about in the post-war period.

There were other reasons why the revolution turned bad. Stalin, of course, is foremost among them. Lenin saw the danger in him but was too weakened by ill-health to be effective, and besides, the Bolshevik party was never controlled by Lenin (dare we say, pace Varadkar, that the party was democratic?), he was merely its most influential member. But the war and the famines it caused soured something extraordinary that had never before been seen: the possibility of a state truly for its people, rather than for the benefit of a rentier class or industrialists and politicians.

In any event, whatever your politics, October is a beautifully written, pitch-perfect, meticulously researched piece of history. Perhaps more importantly, it captures that moment of ‘utter reconfiguration’, the experience of living through a revolution, in a way that can only be matched by the real thing. This is an important rethinking of what it means to see a revolution, of how a revolution might happen, compound of good and bad fortune, mishaps, coincidences, strategy and theory as well as the presence of what was a global catastrophe – The Great War. It is doubly important as a warning for our future because we may well be facing our own global catastrophe as the planet quietly fries itself to a crisp. Who knows what material conditions on Earth will be like in thirty or fifty years? Certainly, the Right is preparing for it. They have their guns oiled and ready.

A word about Verso
Verso is the only large English-language publishing house consistently devoted to left-wing thinking and writing. Its website is a treasure trove of information, argument, history, philosophy and politics. Since its foundation in the 1970s it has published almost every major left-wing thinker. Follow the link below to find an interview with the author as well as source material and further explorations of the meaning of the Russian Revolution:
https://www.versobooks.com/books/2443-october

William Wall is the author of four novels, three collections of poetry and two volumes of short fiction. His work has won many prizes including the Drue Heinz Prize, The Virginia Faulkner Award, The Patrick Kavanagh Award, The Sean O’Faolain Prize and many more. He was longlisted for The Man Booker Prize. His work has been translated into many languages and he translates from Italian. ‘Wall, who is also a poet, writes prose so charged—at once lyrical and syncopated—that it’s as if Cavafy had decided to write about a violent Irish household.’ (The New Yorker)