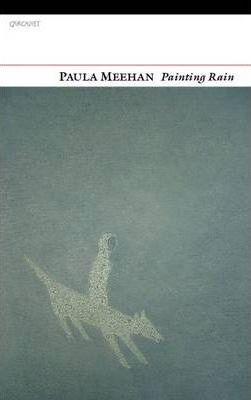 THE CORRELATION OF SOCIAL PRIVILEGE with poetic attainment among Irish women poets is rarely remarked on but nonetheless unsettling for feminist readers. Paula Meehan, whose fifth full-length collection, Painting Rain, continues to articulate the perspectives of her working-class Dublin background, appears an exception to the trend. It is encouraging to find that cultural visibility is not confined to the daughters of Ireland’s ruling and professional classes, though it is also true that Meehan’s route to poetic recognition is a familiar one.

A self-described ‘print junkie’ who was taught to read by her grandfather (Painting Rain contains a sonnet commemorating this primal scene) before encountering the social circumscriptions of formal education, she offers in poems and interviews an account of development which is typical of her class and generation, if rather more common to male poets and those from Britain and Northern Ireland than women from the Republic. Meehan’s early enthusiasms included the Beats and Gary Snyder—she still reads Snyder ‘daily’, and he provides the epigraph to one substantial sequence here, ‘A Change of Life’. She seems amused by her hippyish reputation, and delights in juxtaposing it with the cultural commonplaces and idiom of Dublin. In a poem from the 1990s, ‘The Standing Army’, a New Age Amazon stalks among the ten thousand of Kavanagh’s quip, declaring herself and them ‘weary of metrical talk / starved of chant, craving tribal songs’. In ‘Old Skin’, from Painting Rain, the psychobabble notion of sloughing off unpleasant experience is revivified with earthy Dublinese. The street life of Meehan’s native city is an unexpectedly apt match and foil for her San Franciscan aspect. Her sense of the poet’s communal obligations, implied in the demand of ‘The Standing Army’ for lyric intoxication in public places, is rather more difficult to reconcile with bohemianism. Meehan has an acute sense of poetic responsibility, identifying a socially engaged attitude with the decision to take her writing seriously: ‘I decided to put it out, to be public about it, as opposed to my poetry being a kind of a secretive or private art. You know, to go and look for an audience […] to put the work out, so that that work might find an audience.’

Finding an audience, particularly in the close atmosphere of Irish literary life, may mean abandoning the counter-culture. Meehan’s career has been shaped by bursaries, residencies and community work; it is deeply scored (and sometimes scarred) by the demands of such assignments, as unmistakably as the central figure of one of her best-known poems is ‘marked by winter’. The notes pages of Painting Rain narrate the poet’s working life: prior publications in Festschriften, thematic anthologies and limited fine-arts editions; commissions for civic and charitable projects; acknowledgements to college staff and students after a period in residence. Occasional poetry plays to many of Meehan’s strengths: her propensity to incantation suits celebration and mourning alike. The sequence ‘Six Sycamores’, commissioned to accompany the renovation of buildings on St Stephen’s Green, restores its toney neighbourhood to public ownership with some eclectic Dub:

we’ll raise a glass and offer thanks

to the makers and minders of our material world.
In their war against time: daemons fire them;
St Joseph bear them; muses inspire them.
Guild banner, lodge pennant, red flag of labour unfurled!

‘Her Void: A Cemetery Poem’, also a commission, written for Evan Chambers’ song cycle The Old Burying Ground, impresses with a gentler cadence: ‘The whirr of a bee’s wing is music for her / and the rosined bow of the cricket / and sad percussive raindrops.’

However, Meehan’s undoubted ability to write to requirement coincides unfortunately with an arts establishment that regards poetry as a bit like blue plaques on buildings associated with the famous and a bit more like vitamin D in margarine: commemorative or enriching, or if it can possibly be arranged so, both. Her poetry typically solicits our sympathy; the typical Meehan poem does not require us strongly to distinguish persona from poet. Of two poems in Painting Rain where such distinction is necessary, ‘Note from the Puzzle Factory’ unmistakably implies the poet’s attitudes, while the other—refreshingly realistic about canine behaviour though it is—features her as a main character. Critics have found fault with her ‘confessional / workshop voice that […] beatifies the “I”‘ (the gripe is Bill Tinley’s in a review of 1994’s Pillow Talk), but Meehan’s admittedly high I-count—of 78 poems in Painting Rain only 18 eschew the pronoun, and half of that remainder employ a first person plural or generic second-person—is not the problem. Elevating the speaking subject to a position of privilege is one of the definitive functions of Post-Romantic lyric verse; the dodge is not to appear self-absorbed, and at this Meehan usually succeeds. That she has some kind of ‘workshop voice’ seems undeniable, given that Painting Rain features two separate anecdotes from poetry workshops, but if the poems fail it is because they indulge the extraverted vice of sentimentality. ‘Confessional’ isn’t really a helpful adjective either, though its pejorative use seems to needle the poet a little. Part of the sequence ‘Troika’ is entitled ‘This is Not a Confessional Poem’; more obliquely and figuratively, ‘Hannah, Grandmother’ recalls the advice of the eponymous old lady: ‘Tell them priests nothing […]/ Don’t be giving them a thrill. / Dirty ould feckers.’

Painting Rain is possessed by the personal, familial and elegiac, and yet the reader registers it as an outgoing, demonstrative collection. The subject matter of these poems is selected for emotional and sometimes socio-political interest, and it is on those terms engaging. ‘At Shelling Hill’, a record of a happy family holiday haunted by the poet’s awareness that she is staying near the site where Jean McConville’s body was discovered thirty years after her murder, is notably successful in its linking of personal recollection to political comment. The children of the party play at Cú Chulainn; the adults conceal from them Shelling Hill’s more recent bloodletting: ‘safer the aboriginal gore’. It’s a nice rebuke to poets who apply mythological figures without sufficient consideration of the ethics of analogy.

Elsewhere, in her concern to celebrate resilience, Meehan sometimes underestimates the ugliness of suffering. ‘From Source to Sea’ aestheticises a scarred, tortured body, unwittingly reproducing the torturer’s treatment of human beings as mere matter. ‘Hectic’ vindicates a horrific suicide by making of it art and art object, but does not do it well—or perhaps savagely—enough to lift the poem into cleansing irony. Similarly, though readers might be charmed by characters such as the Traveller girl Bridie, who, given an outdated homework diary by a dismissive teacher, exclaims in ‘merriment’ “I get it. / I’m living in the past!”, the poet’s response of brokenhearted sensibility must strike us as inadequate to both Bridie’s strength of character and her tragedy.

These reservations are inseparable from, and perhaps produced by, the sense that Painting Rain contains no poem that is interesting primarily as a verbal artefact. This is not to complain that there is a lack of ‘form’—it is a formally various, and in comparison to Meehan’s other work, a regular collection. There are many sonnets here, syllabics, couplet stanzas, a very competent villanelle, ‘Quitting the Bars’, which uses the form to evoke the maddeningly repetitive temptations experienced by a recovering alcoholic, though its dualistic theme of self as both ‘ward and warder’ might have been better left implicit. Meehan, like many contemporary poets, maintains a Romantic emphasis on subjectivity while neglecting the duty that accompanies it: that of ensuring the versified soul earns her privilege through linguistic concentration. That neglect makes of social conscience mere worthiness, and of protest mere protestation of virtue.

Kit Fryatt was born in Iran in 1978, grew up in Singapore, Turkey and England, and moved to Ireland in 1999. She runs Wurm im apfel and Wurm Press: wurmimapfel.net.

The Real in Poughkeepsie