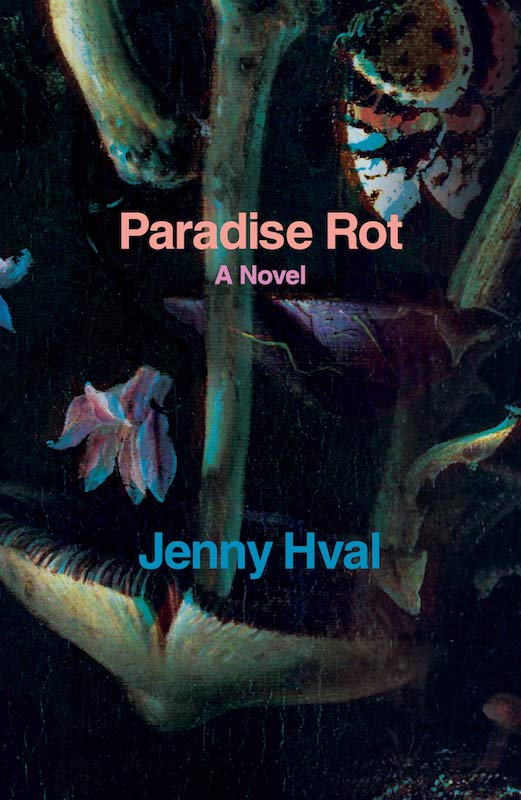 Known for the intimate style of her avant-garde pop, Norwegian writer and musician Jenny Hval’s debut novel presents a nuanced account of a young woman’s sexual awakening during an academic exchange. Originally published in Norwegian in 2009 and translated into English by Marjam Idriss, Paradise Rot is like stepping into a surreal dream, characterised by Hval’s minute attention to sensory detail and use of unconventional imagery.

Who is Jo? A young Norwegian biology student who arrives to study in a coastal town called Ayebourne for what feels like an unspecified but limited amount of time. Hval makes it clear that this mystery town is in a part of the world full of native English speakers, but typing “Ayebourne” into Google leaves me empty-handed: Showing results for “airborne.” Search instead for ayebourne? No dice.

Immediately, we’re thrust into Jo’s experience of arrival, and her sense of her own foreignness is palpable. “There, not there, there, not there, I whisper, leaning against the window, drumming my fingers against the glass in time with the words, dunk, du-dunk, as if I’m programming a new heartbeat for a new home,” Hval writes of Jo’s arrival in Ayebourne.

The town’s geography is noted with precision: dominated by the sea and an expansive golf course, intercut with highways and tram lines, ringed by warehouses that have fallen into disuse—sections of the city that teeter on the edge of the map. Upon arrival, Jo’s first port of call is a hostel. Though this temporary housing is arranged by the university for international students, it’s steeped in transience as students mingle with golfers and tourists.

Jo’s scientific tendencies are shown early on in her awareness of the specific textures of food, and this hypersensitivity becomes a defining feature. She notes how breakfast here is “slippery and fluid: silky soft white bread slices that dissolved like candy-floss” – a meal where “only the sugar crunched,” – and contrasts this against Norway’s familiar “whole-wheat bread with hard crusts and coarse liver paste, the feeling of grains and fibrous meat” – breakfasts with the consistency of “wet gravel.”

Earnest and quiet, Jo is constantly cast as an outsider. As the students angle for proper housing, she is the one of the last to leave the hostel for a converted warehouse on the fringes of town. Though languages and cultural norms warp and bend together, her succinct, efficient English, hypersensitive awareness of bodies, and quiet obsession with mycology set her apart from her peers.

Carral, Jo’s new roommate, doesn’t seem to mind Jo’s quiet intensity. From their first meeting, Carral’s magnetism is made clear, as “when she left [Jo’s] sight, it was as if something took over the house, and it seemed to rock.” Though neither Carral nor Jo specifically identify as queer, there is an immediate pull between them which grows over the course of the book. Jo’s attraction manifests in her close attention to Carral’s physicality, honing in on the contrast between her pale skin and her snug pastel sweater, “trying to see a hint of a nipple under the tight-knit wool fabric.” She compiles the exact hue of Carral’s golden curls, the way in which she arranges herself in a chair, the particular arch of her foot. Later, the “hiss and bubble” when she bites into juicy apples and the milky scent of her skin in the early dawn hours. Eating her breakfast of fried eggs across from Carral at the kitchen table, Jo takes a bite: “the yolk burst under my tongue, and I imagined it was her skin I was tasting.”

Throughout, Hval creates tension between the intensity of desire and a hesitancy to act on it. Discovering Jo is a virgin, Carral even encourages her to sleep with their neighbour Pym, and takes to calling her “Little Jo,” as if to dispel her attraction by dismissing Jo as naive. As their intimacy intensifies, there are fewer words between them, meaningful silences taking the place of pronouncements. Carral begins appearing in Jo’s bed in the middle of the night, and both are careful not to address the situation directly, hesitant to upset the delicacy of their dynamic. Jo revels in the feel of Carral’s pressing her “close, hard, as if she wanted to pull [Jo] inside her.” With this encouragement, Jo decides to act. Growing bolder, she “stroked her arms, her thighs, her belly” until “together [they] filled each other to the brim and lay there slumped in an all-consuming doze, like gorged snakes consuming their prey.” Kissing Carral feels like growth: “stalks and fingers and veins spread through the body like a new soft skeleton.”

As we track the shifts between these two young women, the building itself becomes a character. Hval’s descriptions are lush and precise, but not idealised, conjuring up the look and smell of rotting apples, urine-soaked mattresses, and moist bodies. Certainly, there is an otherworldly feeling at work, a silence so complete we can hear the warehouse breathing—iron girders creaking in the wind, apples rotting in the compost bin, Carral’s footsteps on the stair. During a storm, the girls must bring the compost inside, and the warehouse soon becomes “a rotting, reeking Garden of Eden.” A mushroom sprouts along the edge of the bathtub. Mould like a “thick white layer of moss that couldn’t be scraped off” carpets the living room mezzanine. The stench is unavoidable, yet Jo inspects the shrivelled apples inside the compost bin at close range, methodically noting their “grey-white fur.”

This preoccupation with decay is joined by an unsettling obsession with bodily functions. The paper-thin walls allow Jo to listen in on Carral’s movements in minute detail, revealing a profound attraction to bodily functions. Imagery of urine, sweat, and spit become dominant forces within Paradise Rot. This fascination with urine, specifically, is never explained, but drawn on again and again within the text. At the hostel, Jo listens to another girl urinate, noting that it “sounded a little thick, as if warm milk was trickling out of her.” Later, she listens carefully to Carral in the bathroom, describing the sound as “thin flowing yellow ribbons.” Discovering she didn’t flush the toilet, Jo then watches herself urinate, “the two liquids mixing” in the toilet bowl. During one of Carral’s nocturnal visits, she loses control, wetting Jo’s bed. The description of the “warm thin stream [that] trickled against [her] thigh from Carral’s body” arguably has erotic undertones, adding additional complexity to Hval’s use of abject imagery.

Throughout, Paradise Rot rejects idealisation, depicting a paradise built on the celebration of the idiosyncratic sensuality. Bodies are worshipped in their entirety. Decay is examined at close range. So much of the novel’s outlines are obscured, narrowing our focus to sensory detail and the charged gaps in what Hval chooses to reveal. Here, the unspoken becomes more vital than the words that are being said. Though slim, Hval’s surreal debut riffs on the same layered intricacies as her music, transcending simple categorisation to create a dreamy landscape both separate and a part of what we recognise as reality.

Lauren Sarazen is a freelance writer based in Paris, France. Her work has appeared in LensCulture, the Los Angeles Review of Books, Paste Magazine, and Teen Vogue.