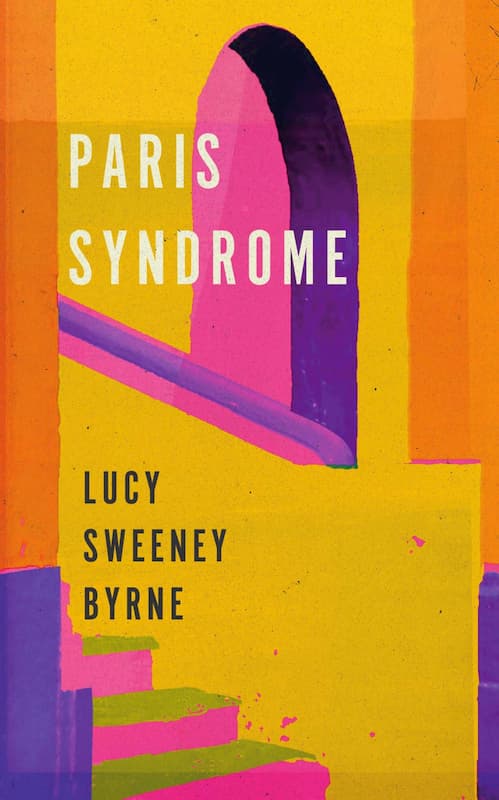 Paris Syndrome is an astutely named collection, as you might expect from a writer as acutely self aware as Lucy Sweeney Byrne. Named for the feeling of disillusionment felt by (typically Japanese) tourists visiting the French capital and finding it different from their expectations, the symptoms are extreme: hallucinations, depersonalisation, severe delusional states. Sweeney Byrne’s stories mimic this discomfort with the contrast between how things are ‘supposed’ to be and how they truly are. At its core, this is a book of squandered yearning.

The stories here recount discrete journeys made by the narrator, often in first or third person. At times abstract, but more often concrete reportage of a trip and the characters encountered, it seems a simple formula, but the narrator’s complex interiority creates a feeling of unending depth. Interactions are striated by loathing and love and shame, each story a crisis and a salve.

Lucy, as the protagonist in every story but one is named, is the consummate peripatetic narrator. The scenery around us is always shifting, the tense and person changes, but we are always in company with Lucy. As such we learn her tics and habits, become close to her thoughts and inclinations, to a degree that is at times uncomfortable in its rawness. Sweeney Byrne does not shy away; her writing is unapologetic in a way that echoes writers like Edna O’Brien and Ottessa Moshfegh. Each narcissistic or ugly thought is presented cleanly before us, an offering of honesty so disarming that you can’t help but feel affectionate towards Lucy – as you might a cat who has presented you with an unrequested mouse at the foot of your bed; repellent but sweet at the same time.

Paris Syndrome is often a book about loneliness and attachment. Each adventure is precipitated by a need to fill the protagonist’s life, to present to the world a display of purpose, of excitement, in lieu of the markers that are more commonly used to judge a person’s success. For someone so determinately outgoing, we repeatedly find Lucy in a position of need, for company and rescuing. There are plenty of people (mostly men) willing to fill these voids. They are usually met with derision and neglect, perpetuating the cycle of loneliness in which Lucy has found herself. In this sense, Paris Syndrome reads as radically contemporary. The battles that Lucy fights are those familiar to millennial readers: difficulties connecting in a world that has too many connections, never having enough money to really settle down, not even wanting to settle down but being lambasted by the propaganda of those who have. Sweeney Byrne manages to present us with this malaise without being self-pitying, a trap that so much contemporary writing falls into. Sweeney Byrne’s acerbic wit marks her apart. Her observations are often caustic, but tempered with an awareness that stops just short of sneering. If Lucy ever does feel sorry for herself, she does it in such a grotesque and unpleasant way that we have no option of sugary sympathy.

In her constant switching from the first to the third person, Sweeney Byrne is at once bringing us close and showing us the artifice of what she is giving us. We are reminded that these are not personal essays, not in the traditional sense, but stories that give her the freedom (artistically and, I assume, legally) to mess around with timelines and characters and truths without reproach. Perhaps it’s just another way of never having to say sorry.

Lucy is always trying to escape, finding herself in various situations across the world. The first story, ‘That Sinking Feeling’, describes three weeks spent working a ship in New York, and serves the collection perfectly as an introduction. The writing is clear and unadorned, the raft of characters are so concretely described that you could be forgiven for committing them as a false memory of your own. The drive that motivates Lucy to run away to New York leads us into stories set in Chernobyl, Paris, Mexico, Texas and Donegal. But the environment is only a proportion of the flavour profile of these pieces; the taste left in your mouth is always very strongly Lucy-ish. Reading it, I repeatedly think of the cliché, ‘no matter where you go, there you are’.

Bodily concerns are used in the stories to isolate the reader from changing environments. In ‘Foley and the Wolf’, Lucy’s anxiety about a gynaecological procedure serves as a motif that compresses a stay in Donegal into an existential crisis. In ‘And We Continue to Live’, her inability to deal with her period during a trip to Chernobyl hints at an underlying feeling of passivity.

This passivity spreads out into many of the aspects of the book. Things happen to Lucy not through direct motivation or decision, but more as a result of boredom and a need to agitate her environment or those around her to satisfy some feeling of purpose. In imagining her trip to Donegal, Lucy sees herself running every day, writing constantly; a way to prove herself as a writer. Her failure to manage this ironically becomes one of the strongest stories in the collection. Again and again Sweeney Byrne wins with Lucy’s apparent failures.

Lucy’s appearance changes from story to story but her allure is ever present. The men who are drawn to Lucy appear hapless and innocent, their intentions subsumed by what they can do for her. I felt myself drawn in in a similar way, falling more and more entranced by Sweeney Byrne’s writing and her stories. There is something in the surety with which she writes, even when doubting herself or her motivations, that makes one want to follow on. It is not hard to imagine the men in the stories feeling this magnetism, the feeling that Lucy has an authority that we should not question.

Conventional authority is constantly subverted in Paris Syndrome. We are conditioned through the stories to suspend our reliance on a consistent narrator. The shifting between first person and third creates a fluidity that follows into our expectations on the stories. There is no burden of development; we are relieved from the anticipation of personal growth or success. The stories perform a kind of aspirational failure; a version of living that reflects a generation who are curtailed by financial and social divisions. In Sweeney Byrne’s portrayal of instability and uncertainty, there lies something recognisable and sincere – a remedy for our collective disillusionment.

Emily S. Cooper’s work has been published in Banshee, Hotel and Poetry Ireland Review, among others. She was a recipient of the 2019 Next Generation Award by the Arts Council of Ireland and her debut pamphlet comes out with Makina Books this year.