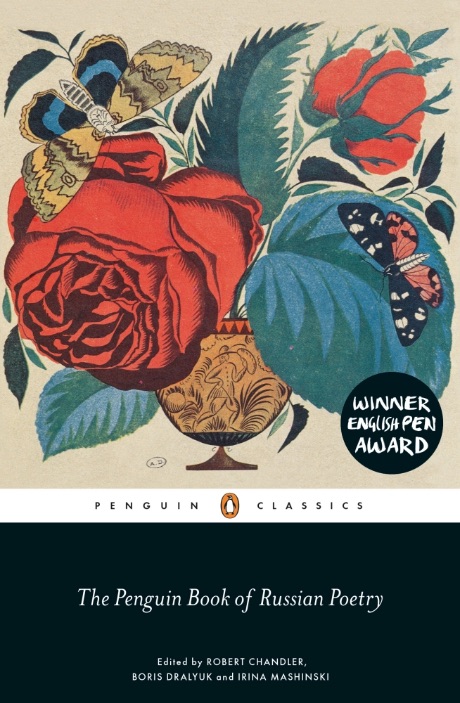 The Penguin Book of Russian Poetry

Like the country itself, the Russian language can be something of an enigma, yielding to translation only what it wants, holding back elements of itself for those who explore it first-hand. Of course, outside the world of academia, and espionage perhaps, it is not a widely spoken language among Anglophones. So, in Russian poetry we have a literature feted by and familiar to an English-speaking audience but seldom read or heard in the original language.

While having the original text of a poem alongside the translation can act as an anchor to the source, it probably won’t upset too many people that, unlike 1965’s Penguin Book of Russian Verse , the new Penguin Book of Russian Poetry does not include the Russian-language poems. Yet, despite what might be lost in translation, there is something in poetry—a coded version of language to begin with—that goes beyond its existence in its original form.

I’ve heard often enough from Russians that Russian poetry can never really be translated into English. It’s a debate beyond the confines of this review, but suffice to say there are noticeable variances in tone between some of the originals and the English versions presented here, although these are probably more cultural issues than linguistic ones. It is not a question of failings in the translations, rather there are instances where it feels like the poem has not only been translated into the English language but also been given a different outlook to the original.

Mayakovsky’s ‘A Cloud in Trousers’, for instance, is rendered into something more polite in English and subsequently loses some of its immediacy. The Mayakovsky we know in English is often assumed to be a formally inventive, somewhat radical poet, but in the original Russian Mayakovsky—though often typographically unorthodox, in keeping with his futurist roots—is remarkably faithful to the traditional musicality, rhythm and metre of Russian poetry. For example, in the original, Mayakovsky employs a clever internal rhyme to give a sense of immediacy to his desire:

Which translated literally is simply the command: ‘Maria, closer!’

However, in the English version here, the addition of an extra word significantly changes the tone of Mayakovsky’s original: ‘Maria, come closer.‘

This interpretation loses something of that expressed in the original: crucially it changes from the poet commanding  something to the poet asking something. The vernacular employed by Mayakovsky perhaps might seem brusque, but according to where you stand, that was either one of his faults or part of his charm.

A few lines later, in the English version the poet tells us he is ‘flesh and blood’ whereas in the Russian he is ‘meat’ (а я — весь из мяса). There is a visceral sense to Mayakovsky’s original that is toned down in the English. However, while at times I can’t help but miss the personality of Mayakovsky, the translations are still a wonderful gateway to his writing. The anthology provides a selection of his work that ranges from romantic futurism to more concrete political material following the Bolshevik takeover and Maykovsky’s adoption as the de facto poet of the revolution.

Meanwhile, a quite faithful translation of Lermontov’s ‘The Dream’, stemming from his military service in Dagestan during the early 19th century, reveals a poem that might have been written yesterday.

Translation of Russian poets, however, tells only part of their story. While the anthology covers several important 19th century poets—including a substantial section devoted to Pushkin—there is an understandable bias towards poets of the 20th century and the great Soviet-era poets are well represented. The Background Notes that preface the translations provide some useful context against which the poems can be read, especially where lesser-known poets are concerned. Indeed, included in the anthology are several so-called ‘State poets’; a number of recognizably dissident poets; and also many writers who found their standing fluctuate—by necessity operating simultaneously within and outside the system—who were published and established in the Writers Union one day and exiled to the provinces (or the gulag) the next.

Poets in Russia, from Pushkin to Brodsky and beyond, have long had to navigate carefully the political landscape: their livelihoods, and lives, often arbitrarily decided on by the regime of the time. It was a serious undertaking. Figures such as Mandelstam, Akhmatova and Pasternak embodied the highest, and somewhat romantic, expectations we imagine of poets: that they would not only live for poetry but that they were prepared to die for it, too. The translations of their poetry provided in the anthology demonstrate the thoughts and ideas at the heart of their work and also, where possible, maintain the form and metre of the poems. This is important in understanding the work of Akhmatova and Mandelstam: the rhythm and metre of their poems made them easier to memorise at a time when possessing paper copies of the work was dangerous. In contrast to the western poets of their era, traditional form in Russian poetry became an expression of freedom.

A later generation, including Voznesensky and Yevtushenko, emerged in the post-Stalin years and often convey a humanism irreconcilable with the State, yet they were tolerated and—at times—even accommodated by that state. This brought with it accusations of, at worst, complicity but more often of apathy towards the system. We should remind ourselves, however, that these poets were born and wholly brought up in the USSR. If to simply be a poet in the Soviet Union was a fraught business, to be a poet who said ‘no’ was a dangerous one.

Yevtushenko is often considered problematic in this respect: the author of landmark works such as ‘Babi Yar’ and Bratsk Station,  he became one of the most recognisable and popular cultural figures in the USSR during the 1960s. Now in his eighties, he remains active and something of a celebrity in contemporary Russia. For whatever reason, there is just a single Yevtushenko poem—and not one of his finest—in the anthology.

The exiled Brodsky, of course, is the other side of this story: as the USSR turned away from the brief post-Stalin thaw, he became the latest in a long line of persecuted poets in Russia. Brodsky and Yevtushenko illustrate two very different experiences of writers under the Soviet regime—those who openly and actively resisted and those who chose to work within the system. The treatment meted out to Brodsky is a sobering tale for any writer who feels hard done by in their literary endeavours.

The inclusion of lyrics by the popular Soviet singer and actor Vladimir Vysotsky highlights the importance of music and musicality in Russian poetic culture. Yet, the lyrics depend on the sound of the Russian language, the slang and wordplay used by Vysotsky: they are poetic at times but—like many fine songs—not always poetry. Likewise, the sequence of non-Russian poems— albeit inspired by Russia—included at the end of the book also seems an odd choice. These are not bad poems by any means, but they seem out of place in an anthology of Russian poetry, particularly when there is so little included from poets of the Russian diaspora or anyone born after 1954.

There is still a vibrant Russian poetry, and among the newer Russian poets there exists voices that continue the proud tradition of not simply being an echo of power. For example—and without even getting to the younger generation of contemporary poets—there is no place in the anthology for acclaimed conceptual poet Lev Rubinshtein or the late Yekaterinburg poet  Boris Ryzhy. The latter in particular, before his death (like Lermontov, aged 26) in 2001, channelled a stark yet vivid depiction of life in the immediate aftermath of the Soviet Union’s collapse, a defining period in modern Russia and one that perhaps could have been given more attention.

Disappointing omissions aside—and there will inevitably be some in an undertaking of this scale—the fact remains that this is an eruditely assembled, comprehensive and thought-provoking book. It provides a broad overview of modern Russian poetry and should form part of any aspiring poet’s library. It reminds us that poetry is an essential element of the human condition and of the importance of poets to Russian society right across the imperial, revolutionary and Soviet eras. Several names will be instantly familiar to Anglophone readers but there are others however who, despite solid reputations in Russia, are less well known outside the Russian-speaking world. The Penguin Book of Russian Poetry includes many of these, bringing poets such as Baratynsky, Fet, Zabolotsky, Berggolts, Shalamov and others, deservedly to a wider audience.

Poetry endures because it reminds us of—and at the same time questions— our search for meaning and need for something beyond immediate comprehension. It often comes about in times of adversity. The best of the work included here, particularly from the Soviet-era poets, certainly fits that description. Apart from anything else, the Russian language lends itself to poetry, its sounds and richness have helped form a unique poetic culture that resonates far beyond the borders of its vast motherland and, as this collection demonstrates, beyond the language itself.

Alan Jude Moore is from Dublin. His most recent collection was Zinger (2013) from Salmon Poetry.