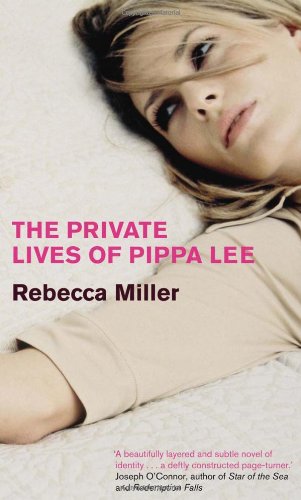 The Private Lives of Pippa Lee

The Private Lives of Pippa Lee opens as the eponymous heroine and her husband, Herb, settle into their new home in a retirement village—an unlikely setting for a novel and welcome for that. Pippa is fifty years old, Herb eighty, so this is Herb’s move. The couple have sold their properties in Gramercy Park and on Long Island, and made the move away from the world of Manhattan publishing. But really editor Herb is still working—always looking for the next big thing—and the Lees’ friends are the rich and accomplished literati.

In its portrayal of wealth-cushioned, flawed New Yorkers, the book has echoes of Claire Messud’s much-praised novel The Emperor’s Children. This is the milieu also lengthily explored by John Updike: the bored middle-class and wealthy in the USA, dragging off each other because they can’t think of anything else to do.

Twice in the opening pages Pippa is referred to as a ‘cipher’, meaning here, I think, an enigma, but used also to mean ‘a nothing’. She is referred to variously as ‘sweet but deadly’ and ‘the icon of the Artist’s wife: placid, giving, intelligent, beautiful.’ Pippa has been trained—according to Herb himself—by her husband. Rebecca Miller’s aim in the novel is, it seems, to show that this wealthy, nothing-ish woman is no such thing, and she does this by outlining Pippa’s unhappy childhood and her drug-fuelled and seedy sexual past.

Miller sets the scene with long, painterly descriptions of each character. She has a propensity for the over-use of simile and metaphor in general, but especially in physical description. Referring to Pippa’s neighbour, a very minor character who has had cosmetic surgery, she writes that she had ‘cheekbones that looked like Ping-Pong balls under skin. The two swollen halves of her upper lip drooped suggestively like a set of red velvet curtains tied at the corners of her mouth…The tip of her nose was pinched, as though a pair of fingers had squeezed a clay sculpture as a prank. Her eyelids seemed Krazy-Glued open a little too wide.’ All of this description, though fresh, is a tad relentless.

Pippa, we are told, loves the thrice-married Herb very much; she also loves her son, Ben, but she has a distant relationship with her daughter, Grace, who is Ben’s twin. The first sign that Pippa is anything less than the perfect wife leading the perfect life is when she sleepwalks at night and makes a spectacular mess with food in the kitchen.

Early on, a whole chapter is devoted to Grace, the über-successful photographer daughter, who is unable to love. This chapter hangs by itself in the narrative, though Grace, for this reader at least, is one of the more interesting characters in the novel and a more inclusive look at her place in the story would have been welcome.

The book’s structure is non-linear and Part Two, a first-person narrative, is sandwiched between two shorter, third-person parts. Part Two opens with a wonderful description of Pippa’s birth in her own words: ‘I emerged from Suky’s womb, fulsome and alert, fat as a six-month-old, and covered in fine, black fur.’

But the reader spends much of this second part of the book feeling tugged back to Part One and wondering when the story of the novel will take place. What is this book about? What happens to Pippa Lee? Are we shown her whole young life as an explanation for an inherent helplessness and badness, which she has covered in a veneer of respectability as the trophy wife? This long mid-section does appear to be an explanation for the sleepwalking and Pippa’s apparently out of character cigarette smoking. Its main premise seems to be that appearances can be deceptive: a boring, rich older women can have a wild past. It also concludes that fraught mother-daughter relationships often inspire fraught mother-daughter relationships in the next generation, and that a child who is not loved consistently will seek love everywhere. But we don’t get enough story in the first part of the book to care much about what shaped Pippa. A lot of the novel reads like back-story for a woman whose motives are not clear and whose epiphany, when it finally arrives, is rather late.

Pippa comes across as one of those women who doesn’t seem to be able to get on with other women, preferring always the company of men. She doesn’t retain friendships, or even familial relationships with the women in her life, preferring to sleep with the partners of her women friends, whether male or female. It is hard to have much sympathy for Pippa in her relentless pursuit of a minder, someone to whom she can hand over all the responsibilities of life. Before their marriage, Herb rents an apartment for her in uptown Manhattan. Creepily, he also buys her clothes and, even more creepily, she allows this. She surrenders completely to her Sugar Daddy, stating at one point: ‘I had been tamed at last.’

There is beautiful writing in this book, for sure, and Rebecca Miller has a magnifying-glass-like eye on the intricate and petty detail of relationships. She is particularly perceptive on the whims of teenage girls and the manipulative power they can possess and sometimes make use of. She is also wonderful on the small events that have huge significance for children, as well as on the loneliness of mothers: ‘It was so lonely, knowing things about her children that they no longer remembered.’

Rebecca Miller is unafraid of poking into the issues surrounding disaffected women and their sexual dalliances. As a character, Pippa is very well drawn—we get a clear picture of a beautiful and self-centred woman, always struggling to replace the love and protection she rejected from her parents. We are not required as readers to like the characters we read about and it is just as well because Pippa Lee is a vacuous and selfish manipulator, a product of a depressed mother, a distant father and her own unfillable longings.

It takes the whole book to get down to the heart of the story—what is happening to Pippa now—and what she does about it. She is an engaging and sometimes infuriating figure, but the reader is drawn into her personality in a way that makes her understandable, though not altogether easy to like.

As Miller is also a film maker, the movie of the novel is already in production with Alan Arkin (of Little Miss Sunshine fame) as Herb, and Robin Wright Penn as Pippa; one imagines the film will make a more likable and human character out of Pippa Lee.

A Poet and an Uncalled-for Ending