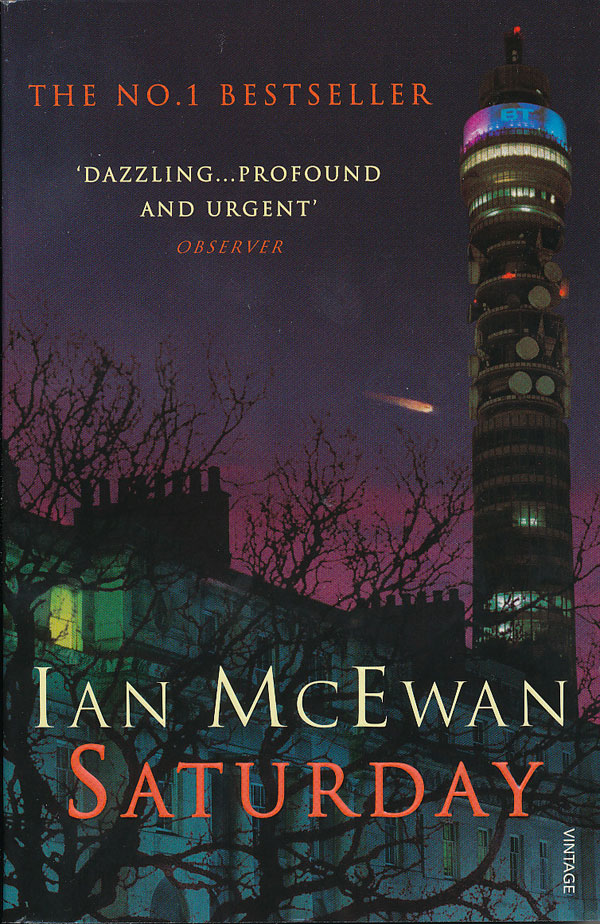 About two-thirds of the way through Ian McEwan’s flawed and engaging new novel, Saturday, a rather curious thought begins to sneak up on you. And when it does, it comes almost as a relief. It is at this stage, about a hundred and fifty pages in, that you begin to realise what this novel is not going to be about. That, of the three or four possible books the author has entertained up to this point, you realise there was really only ever one all along.

Saturday takes place on a single day, February 15th, 2003, and follows Henry Perowne, a 48 year-old neurosurgeon, around London on his day off. He does typical day-off things: he makes love to his wife, plays squash with a colleague, buys dinner (a fish stew) for a long awaited family reunion which is planned for that evening. He also visits his infirm mother.

Henry, it soon emerges, has it pretty good. At his age, he finds he has no need to reach beyond himself for happiness. He has a bustling practice at a London hospital and, along with it, the genuine respect and friendship of his colleagues. He has a beautiful home and a shiny Men;:edes that, after some initial buyer’s remorse when he bought it a couple years back, he now takes a particular pride in owning. Most importantly, he has his family, who are perhaps just short of weird in their apparent perfectness. There is his loving wife, Rosalind, a successful lawyer, whom, after more than two decades of marriage, he still adores, and their two prodigious adult children, Daisy, a 23 year-old Oxford grad and accomplished poet, and Theo, aged 18 and already a recognised blues musician. (Considering their youth, I could not shake the idea of them having just stepped out of a Wes Anderson flick, though maybe without the neuroses and bone-dry humour.) Yes, indeed, Henry himself seems almost a celebration of the good life.

So what can possibly go wrong in a single day? Well, quite a lot of course, and it isn’t the fish stew.

To start with, Henry’s day of leisure coincides with the largest peace protest London has ever seen, with more than a million people on the streets, and many more around the world, marching against the approaching war in Iraq. Henry’s stance on the war, while not equivocal, teeters towards the passive observer. At moments he finds himself leaning against the conflict in the company of a staunchly pro-war colleague, then later defending the coming invasion, and Britian’s role in it, to his highminded, liberal daughter. But like the rest of us, Henry is someone who, more than anything, seeks connection and empathy with the uneasy world around him, and his shifting views never really seem like hypocrisy. His pro-war tendencies rest with good cause on one of his patients, an Iraqi academic who has seen the inside of Saddam’s prisons.

It’s here Ian McEwan is at his best. He affords Henry a good case for invasion and a good case for staying away. And while he allows himself some ground for literary retrospection (how many of us knew what Abu Ghraib was in February 2003? the answer: zero), he isn’t afraid to throw up this two-sided coin and let it land.

Yet Saturday is not a meditation on the war in Iraq. And this is perhaps the first, and most obvious, of the novels which this one is not. While the conflict is a constant presence throughout, the demonstration is only ever viewed from a distance, and remains beyond Henry’s more pressing thoughts of life, death, and making his squash game on time. Even the heated argument he has with his daughter ends amicably with a £50 bet on whether Baghdad will be an inferno or the new home of Middle East democracy after the invasion. One assumes Daisy eventually cashed in.

In any case, Henry Perowne has his own private Saddam to deal with. After a minor car accident, arguably caused by the traffic disruption of the protests, he finds himself face to face with a small-time London criminal named Baxter. In an inspired scene, Henry narrowly avoids a vicious assualt by miraculously, and believably, diagnosing Baxter’s degenerative weakness. An act of humiliation, that later in the day, comes to haunt him.

Yet here we have road-not-chosen number two. Saturday, perhaps a little regrettably, is not a novel about the chance relationship between an affluent neurosurgeon and a doomed thug in the early throes of a senseless neurological disease. McEwan sketches Baxter with pity and revulsion, and this is the way we are left to look at him. We are never let into his troubled thoughts or the life in Kentish Town or the moment a doctor tells him there is no hope for someone with his condition. We can forgive his situation, but not his actions. For his part, Henry is surprisingly unshaken and continues on his way. Later, towards the end of the novel, he muses over Baxter with extraordinary sympathy but, considering the day’s equally extraordinary events, it is hardly convincing.

Another novel that begins to unfold in the early pages of Saturday is that of Henry’s profession. It quickly emerges that the good doctor is not just a man of science, but a true believer in the promises that modern medicine holds. And he carries this faith into everyday life. He is an empiricist and a pragmatist, and through his job, he has learned to separate the ‘mind’ from the ‘brain’, the thinking, emotional man from the misunderstood, greyish kilogram of matter that rests inside our skulls.

McEwan’s touch here ranges from bad to brilliant. Some of the early passages, weighed down with neurological and medical lingo, are less than sincere. But there are scenes later in the novel that make for utterly compelling reading, such as when Henry briefly encounters and diagnoses a young heroin addict in the street, or confronts Baxter (Huntington’s), or visits his mother (one assumes Alzheimer’s, though it is never clearly stated). It is here that the author’s obvious research shines, as the brain and its frailty, and its sometimes heart-wrenching betrayal of the mind, are described with unaffected elegance and sympathy.

But once again, this is not the story Saturday eventually tells. Henry’s view of life, as seen through the eyes of someone in his line of work, remains unchallenged. A side of himself that is beyond debate. Even after his visit to his mother, and a second and far more dangerous confrontation with Baxter, Henry’s faith in the benevolent role of science is undiminished. Perhaps even reaffirmed. As the Charles Darwin quote he carries with him through the day states: ‘There is grandeur in this view of life.’

Ultimately, Saturday is about Henry, the man. And, for that matter, Henry, the mind. The slow, sometimes painful, revelation of character which perhaps makes for the best plot of them all. Hamlet, in the end, was about Hamlet, The Catcher in the Rye about Holden. And while Henry himself would not sit easily in such company, at least not without diagnosing them first, he is, like them, a flawed and irrepressible soul. Indeed, a man for his times.

A Glass of Red