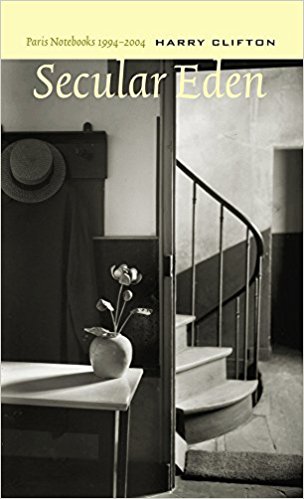 In 1991, struck by poems of Harry Clifton’s in The New Younger Irish Poets, I borrowed Comparative Lives, his third collection, from the Irish Writers’ Centre. Containing the mesmerising disappearing act of ‘The Seamstress’ with its lover/customer who leaves behind him just ‘dry tailor’s chalk and the diagram of a body,’ having read it, I disappeared that book permanently from the I.W.C. I still have it.

This kind of slow theft is, of course, probably not what Clifton is talking about when he writes ‘I watched my books / disappearing off the shelves,’ in Secular Eden. But I mention it as a counterweight to those lines and to illustrate the way in which, at their intervals, Clifton’s books have been news to buy, borrow—or steal.

Written in Italy, the last book from Clifton before the current volume was 1994’s Night Train Through The Brenner. It had closed with references to the key plots moving Clifton’s creative life then: the life allowed—and dictated—by a dedication to creative work; the love that he calls here, ‘my one satisfaction in the whole known world’; in that one word, ‘known’, a third plot: Clifton’s passion for knowledge of the world and for a sense of how to live in it. His readers had grown familiar with all of these, and we had come to trust the formal and still personal voice in which he told them.

In 1996—two years into a decade of a new life in Paris, two years since Night Train Through The Brenner, twelve years till Secular Eden would win the prestigious Irish Times Poetry Now prize—Clifton read in Dublin’s James Joyce Centre. And there, for the first time, was ‘Reductio’. Spiky images, gaping vowels: the landscape and life of the latest Clifton alter ego, Alberto Giacometti, and his epiphanies. That night, it was as if Clifton had managed the trick of the customer/lover in ‘The Seamstress’. Beyond any outline we might have thought we could draw round him, here, now, were poems with a fit between vision and form and a daring and economy that not just the seamstress, but Giacometti, too, would be proud of.

What is big? What is extended in space?
Not this studio, Surely, not this glass
On a wooden table, or the apple
Trapped forever in the intersecting planes
Of redemptive vision,

As he reported and then answered with the sculptor the questions he posed daily from his tiny studio, on ‘how to see reality’ as he put it in 1955, here were hints of new questions, new directions in Clifton’s work too.

And now, the book of this period of work appears. Because of Clifton’s gifts, because it took so long, we are delighted and moved by the reception Secular Eden has had. But what is its news?

To start with, it places us where Clifton next puts down his bags in his creative life, in 1994, in Paris, and it hints, through the alter ego of an absent host’s voice, at how this book may proceed, with ‘all I have abandoned to you:’ with the selection from ten years of uncollected work which this book—unusually in poetry publishing—is going to be.

In the breathing space of France, Clifton takes delight—and makes work of delight—from the God-free scene. And when God does turn up, check out the fun he’s having!

I had set myself free
From Friday at the mosque, that pile of shoes,
Those thousands praying, Saturday Torah scrolls
And lit menorahs, Sunday salvaging souls—
From Daubenton, Des Rosiers, Saint Gervais,
To live again in the body, l’homme moyen sensual…

To readers familiar with his work, a spleen that would do Baudelaire proud sharpens a couple of poems here once again, though Rilke, Tranströmer, Charles Wright, Hart Crane and Milosz would all, I feel, have been proud to have produced other, lovely moments of this book.

And yes, as we can expect from Clifton, this is a book of marvellous poems. I think of the distant rhymes in ‘Saint Augustine’, the perfectly appropriate structure of ‘Descartes at the Court of France’, built round a fulcrum of lines on the mid-life high of that man’s career. I think of the astonishing act of cherishing—and seeing—in ‘Steps’ the second of ‘Three Love Poems’:

Hesitant, nervous, now you start, now stop—
Don’t trip over your shadow or drown in the river!
Blind though I am, I can make you up
As you go along, approaching me forever
On Achilles’ heels of instinct or change,

And speaking of steadying, ‘Steady your gaze’ he exhorts himself or any other dreaming migrant in ‘The Promised Day’, and takes his own advice, till, in the lines below, for me, here’s real news:

Disillusionments, lost years
Are part of the story, the rest is praise—

If days, as they say, are one long abdication,
I into not—I, wearing away the mountain
Underfoot, then let it slide

Night, and the line of mercury will sink
To minus four, over ashes and hot whiskey,
The book of meanings. There, in its stand of pines
A house awaits me. Bud thorn and drop
Are cold beyond knowledge, and the inner ear
Illiterate, rings with air like a glass.

For me, in lines like these there is a humility in Clifton’s poetry that’s letting it ring more clearly than ever—like that inner ear . And it’s possible that this development laid the ground for (and answers) the following criticism. I read the book numerous times to learn the secrets of its ordering, then read it back-to-back with Brenner twice, and, doing this, I was jarred by the difference between it and Brenner’s flow. After a few more reads, ultimately, for me there is a unity to Secular Eden, but it’s a unity of solitary poems. I get a strong sense that the individual poem is what Clifton makes these days; and that this is payment to his muse in the right coin for now.

This book can seem a little cramped, too, as if it didn’t need all the poems it’s carrying. (Then again, the complete Glenn Gould piano recordings, which arrived in my house this week, seem cramped too. And referencing Gould: if I’d space, I’d do more than name-check his composer-hero, Orlando Gibbons, thriving on a similar fin de siecle situation to Clifton’s French one—though in Elizabethan England—and I’d expect to find common ground between Clifton’ s work and Gibbons’ lasting, ego-less output.)

At times, Clifton is more hermetic to me now than previously. In order to understand the little miracle of the poem, ‘Fabritius’, I had to look up this pupil of Rembrandt’s. (The gift of finding his painting of a goldfinch, chained to his perch but ready to fly off the Wikipedia page at me, made that bit of work well worth the effort.)

The last page of this book goes to the lost voice of Benjamin Fondane. As the Romanian-French poet departs ‘for the east’ and Auschwitz, Clifton speaks for him. The book’s dearth of notes leaves it unclear if these are Fondane’s words, but they are majestic on his behalf in any case, sweeping as the wind that sends the leaves to the hallway in the poem’s desolate image:

And now they tell me ‘Hide your poems, wait—
Somewhere in Nineteen Eighty
Readers will find you…’ I see a Paris street,
Old letterbox, a drop-zone for the infinite
In a leaf-littered hallway, where a publisher long ago
Went out of business, and a young man searches
In the sibylline mess and the overflow
For a few lost words—my own soul-sister, my wife (…)

And it’s now that this sense, caught here, of questioning—questioning of the point and value of any creativity—throws its light back through this book. After it, if I’m still hungry for other notes I sense Clifton could strike, it leaves me looking forward equally to absorbing its news. As well as being a lovely book, I think it’s a development ‘in keeping’ for Clifton, a development of a valuable and singular kind.

Yvonne Cullen works as a creative writing teacher. Her first poetry collection, Invitation to the Air, won the American Ireland Fund Award in 1997 and was published by Italics press in 1998. Yvonne’s poems appear in 2004’s New Irish Poets from Bloodaxe Books, among other anthologies. Showtown, her non-fiction account of a showpeoples’ caravan park in Dublin, and of the twentieth century world of Ireland’s travelling shows, will appear at the end of 2012.