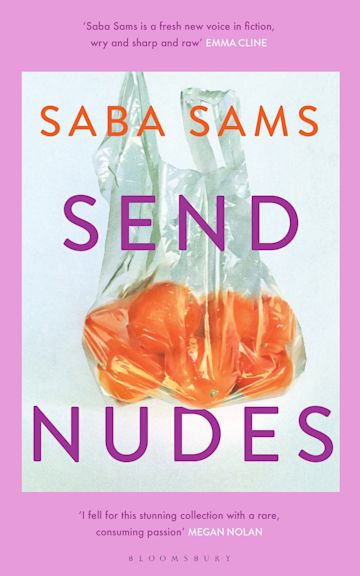 Saba Sams commences Send Nudes, her debut collection of short stories, with a quote from Mary Gaitskill’s Veronica, a novel about 1980s New York, high fashion, and the AIDS epidemic:

Yes, we were stupid for disrespecting the limits placed before us; for trying to go everywhere and know everything. Stupid, spoiled, and arrogant. But we were right, too. I was right.

In a new introduction to Veronica, Gaitskill writes, ‘so many people live like this, finding each other only briefly; small people in every class and culture struggling to live and grow and find a shape for themselves in a monstrous, grinding world’. As though picking up this idea and transposing it into smaller, but no less grinding, British locales, Send Nudes is run through with questions about multiplicity, fleeting moments of connection, and the mutability of the self.

The final lines of Gatiskill’s intro reads: ‘It was not about words; it was too big for words and did not care about words. But I needed words […]’ and this seems like a good place from which to begin trying to understand Send Nudes, a book about the narratives we construct for ourselves, and the narratives others construct for us. Sams’s characters are held hostage by the market-designed paradigms of their moment, or, as Gaitskill puts it, ‘the million-headed hydra of mass culture [that] screams, “We are this! We are that!”’

The opening story in Sams’s collection, ‘Tinderloin’, begins with the speaker, Gracie, matching with Ryan on Tinder. Neither he nor the speaker have made much effort by way of their profiles: Ryan ‘only had one photograph of himself on his profile, edited with a grainy filter,’ and Gracie’s picture isn’t even of her, it’s ‘another lanky brunette that I’d found online, her face turned away from the camera.’ From the off, Sams prepares the reader for the anonymity of her characters, not only to the readers, but to themselves. These are women occupying various places on a spectrum of age and sexual maturity, united by the alien quality of residing within a cis woman’s body, and falling victim to its machinations. As a 16-year-old, Gracie is experiencing the commencement of what many of us will recognise as a long and complicated relationship with our physicality. In what could be read as a raucous inversion of market capitalism’s overzealous sexualisation and objectification of young women, Gracie appraises Ryan as if he is a cut of meat, ‘a good ratio of muscle to fat’. And the story ends with Petal, his dog, coming to the same conclusion. Sams explores our lack of control over our bodies, and how this lack can come to challenge our flimsy conceptions of self. After she learns she is pregnant, Gracie lapses into powerless reveries, finds herself, ‘in a corner shop, chewing gum, with no memory of how I’d got there’. When our bodies render us foreign to ourselves, what hope do we have of intimacy with someone else?

Gilles Deleuze writes that there is no personal identity, no unified person, and that the subjective is the affective assemblage of bodies of different orders and elements. For Deleuze, the body is a ‘molecular sludge’ that adheres to the mind’s actions, while the mind is utterly dependent on this sludge. The body’s susceptibility to its surroundings takes its toll on the mind, particularly when the body is imposed upon. With biting acuity, Sams captures the shame and alienation that this reciprocity incites. In ‘Overnight’, following a sexual assault, Maxine, ‘walked through the park, with an image in her head that wouldn’t shift: her body as a nut cracked open.’ Sage, the young girl in ‘Flying Kite’, is discovering her changing body’s unruliness: ‘Floating on top of the water, [her breasts] resembled the white bellies of two dead fish.’

Very occasionally, this dissociative tone veers into excess. A scene in ‘Tinderloin’ where Gracie idly presses a boning knife through her thumb feels like Sams pursuing the collection’s (generally very effective) grim, realist quality to some extreme, not-quite cohesive conclusion. Similarly, the ending of ‘The Mothers and the Girls’, where two girls fling themselves from a trapeze platform without a safety net, feels slightly disproportionate to the somewhat psychotropic, but primarily grubby, atmosphere that precedes it. However, the immersive quality of Sams’s worlds always carry you through, as does the collection’s wit. Perhaps this is another through-line that can be drawn from Gaitskill to Sams: the wry humour of the characters’ dialogue, which doesn’t shy away from the various paucities of their lived experience, but instead acknowledges them. “There’s lots of men in the world, Lara,” Meg says in ‘Snakebite’, after learning that Lara slept with her own mother’s boyfriend. “I know,” Lara says, “Isn’t it wonderful?”

It wouldn’t be an especially incendiary take to say that a short story collection should be more than just the sum of its parts, but something I was struck by when reading Send Nudes is how the stories interact with one another, beyond their commitment to certain themes. The gifts Meg buys for Lara in ‘Snakebite’—a rabbit, some earrings—echo through objects lost or transfigured in other stories: Jos’s earrings in ‘Overnight’, Sage’s rabbit slippers in ‘Flying Kite’. Moments like these, coupled with the collection’s preoccupation with the sky and horizons, create a simultaneous sprawling and cloistered effect. Sams’s characters cling to the small moments and items they deem apotropaic, but they are also subject to the ‘endless’ ‘navy woods’, the sky blooming ‘huge and blue’, the world that is ‘not over’. Their scenarios are boundless and frightening, but also dictated by quotidian encounters. The teenage boy the protagonist of ‘The Bread’ meets after having sex at the festival has a smile ‘massive and unruly against the pastel sky.’

Another example of recurrence is Gracie’s planned, but ultimately unrequired, abortion in ‘Tinderloin’. The abortion becomes a delayed sentence, finally experienced by the unnamed first-person narrator of ‘The Bread’. Sams seems to suggest that there are only so many outcomes for cis women within heteronormative models, and, like Gaitskill, she recognises that humour is not a panacea; that the cynical or nihilistic wit we might use to navigate these models will neither protect nor absolve us.

Indeed, the protagonist of ‘The Bread’, for all her putative insouciance (‘I thought it made me seem aloof not to ask the boys I slept with to put a condom on’), betrays the complexity of feelings following an abortion, the cognitive maelstrom of what is never a simple choice: ‘I lifted the loaf from the rack and turned it in my oven gloves. I don’t know what I had expected to feel. Authority, perhaps. I didn’t feel that.’ Following the narrator’s abortion, her friend Eliza tells her she is thinking of stealing some underwear from Victoria’s Secret. The narrator replies, ‘You could get an employee fired. She might have children to feed.’ She can’t help but invoke hypothetical children as fodder in her admonishment, revealing that none of our choices occur in a vacuum; the decisions we make will always be encroached upon by dictatorial narratives, someone else’s idea of how our bodies should be put to use.

The collection’s vibrant navigation of the individual as both mutable and sequestered has an alchemical effect, glossing some of the weaker moments, although I will stress that these are few. Occasionally, the brevity of a story means its denouement doesn’t quite feel earned, and certainly the strongest stories are the lengthier ones, where the ideas are given sufficient space to percolate. ‘Snakebite’, for example, is masterful in how it captures the specific kind of cathexis that can occur between late-adolescent women. Exciting variations on obsession are also explored in ‘Tinderloin’, and ‘Blue 4va’, which is a truly remarkable piece of writing for how it captures the dynamics, sometimes symbiotic, sometimes parasitic, of a family on holiday, and how their ecosystem is threatened by an enigmatic and sexually confident young woman called Blue, friend of older daughter Jasmine and captivator of younger sister Stella. Blue is somewhat reminiscent of Amber, from Ali Smith’s The Accidental, with the ‘tangle of dark hair’ in her armpit, her ‘bare feet […] dirty with red dust’, and her innate capacity for provocation: ‘Maybe I should start fucking your dad.’  Frank, the dad in question, is a photographer, and his camera is ‘fitted with something called a dream lens, a rare piece of kit he bought specifically for the intense sunshine’. Sams applies a similar lens to her writing, perfectly capturing the claustrophobic heat and cauterizing light: ‘The sun filters through the wooden shutters. A mosquito, fat with her blood, swims lazily around the top of the net’; ‘They walk barefoot in silence. Geckos scuttle in the dry stone walls, and the yellow grass creaks.’ The story culminates with a small act of rebellion, but within the fraught panopticon of the environment, it takes on all the weightiness of great betrayal or tragedy. It’s a pitch perfect end to an intoxicating story.

On the other hand, the collection’s titular story finishes with its protagonist, who struggles with body dysmorphia, experiencing a kind of apostasy during a violent storm—she finally compels herself to send a naked photograph to a stranger, then foregoes the restrictive shapewear she’s been using to corral her flesh. The story closes with her out in the newly excoriated world, unencumbered. She buys a pastry and inspects a felled oak, which ‘flashes its upturned roots at her, gorgeous and brazen in the new sun’. It’s a powerful image, but I was left wondering if the epiphany didn’t feel quite hard-won enough, occurring almost too easily within the structures that made the protagonist detest and distrust her body in the first place. The book’s final story, ‘Today’s Square’, also didn’t quite land for me, but Sams’s ability to capture a very specific, domestic melancholy in small details ensures that her stories are always luminous at a sentence level. Ma’s underwear is ‘tinged grey from the washing machine’, her dressing gown has a ‘blackened sleeve that she burnt last week making pancakes for dinner’.

These descriptors bring me to what sits, perhaps, at the core of Sams’s talent, which is her empathy—it’s not hard to imagine that an easier recourse, for a lesser writer, would be to entomb characters such as these in arid prose, and abandon them to the vagaries of their personal circumstances. However, like Gaitskill, Sams is not a cruel writer, nor an ambivalent one, and maybe this is what makes the collection so enjoyable. For while Send Nudes delivers unto you the bathos, the humiliation, and the pain of living, it does so while saying, ‘You know, I know too.’

Susannah Dickey is a writer from Derry. Her most recent poetry pamphlet, bloodthirsty for marriage (Bad Betty Press, 2020), received an Eric Gregory Award. She is the author of Tennis Lessons (Doubleday UK, 2020) and Common Decency (Doubleday UK, 2022).