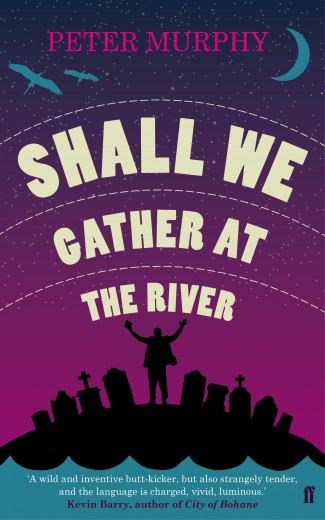 Shall We Gather at the River

Spare a thought, if you will, for the failed messiahs, the prophets who came to nothing. We tend to remember only the relatively successful ones (Jesus of Nazareth, Muhammad, L. Ron Hubbard) or the more recent doomed claimants (David Koresh, Jim Jones, Marshall Applewhite) with their varying megalomaniacal tendencies. To test whether the latter truly failed we’d need to come back in several millennia and check if their ramblings had managed to take hold in a sufficient number of the populace. History moves in mysterious ways. What, then, of the others? Cyrus Teed with his teachings that the earth and sky exist inside a hollow planet under a mechanical sun. Arnold Potter who, believing he would ascend into heaven, leapt from a cliff to his death. The sleepwalking divine Jacobina Mentz Maurer. Mad John Thom the bullet-proof Cornishman. Tanchelm of Antwerp. Moses of Crete. Simon the Magus. Or the ones who might, in some obscure backwater, be subject to revelations right now?

In Shall We Gather at the River, Peter Murphy explores similar terrain to that of his largely-acclaimed debut John the Revelator. It’s partially a tale of skewed adolescence (is there any other kind?) set in townland Ireland; a godforsaken and thus god-obsessed place. It’s possible to label Murphy’s style of writing as an Irish version of Southern Gothic with trace elements of noir and magic realism but to do so is crudely reductive. His town of Murn deserves to appear, on its own terms, on the maps of fictional places. For all the character sketches that make up the book, Shall We Gather at the River is on another level the study of a place where the transcendent and the macabre inhabit the apparently mundane, to those who are attuned to the right frequencies.

Central to the story is the Rua River, from which all the tales emanate and conclude. The title of Shall We Gather at the River comes from an old gospel spiritual from the nineteenth century, which in turn was inspired by a passage in the Book of Revelations alluding to a river of life flowing from heaven. Yet the Rua River is a cruel inversion of this hopeful idea. Murphy gives us succinct but memorable glimpses of the lives it will claim when it rises to flood. This river is nothing less than the collective unconscious with all its mysteries and danger, ‘It knows where the bodies are buried, but will keep their secret, all their secrets, the whole town’s secrets, the river air malarial with secrecy […] And in their dreams the townsfolk do not speak. Because they do not wish to rouse the river.’ This is the realm of Freud as much as Saint John the Divine.

The other main figure is Enoch O’Reilly, a well-defined but troubling protagonist. On a surface level, he’s a difficult character to empathise with, which you sense is precisely the point. His is a mind pushed to extremities by the age and place in which he lives; the restless, ambitious mind grows deformed in such conditions. He lives during the Cold War; the great age of ennui and anxiety, when the West is affluent enough to induce mass terminal boredom but has developed the technology to deliver for the first time the imminent destruction of all humanity. Worse, he lives on a rock at the edge of the Atlantic. O’Reilly is a man for whom time is perilously finite and he is haunted by the frustration of being held back from life, ‘somewhere a clock is ticking, ticking, ticking away his days.’ ‘Wary in his bones and in his balls,’ he is nonetheless determined to ‘leave this world like a fucking warrior monk.’ For O’Reilly, the modern mythologies of radio and rock & roll are intertwined with ancient ones of place and faith. ‘Elvis, Jerry Lee Lewis, Johnny Cash and Carl Perkins gathered around a piano in Sun Studios… the four horsemen of the rockabilly apocalypse.’ The fire and brimstone preacher and the rock n’ roll frontman are the only evangelising presences worth knowing. And both the pulpit and the radio lead back to the river.

The strengths of Murphy’s writing are many, not least in skilfully avoiding the obvious pitfalls of his style. From the beginning, the descriptions of nature are hauntingly rendered, almost redolent of fairytale—though more The Night of the Hunter than Disney. Despite its shadowy subject matter, Murphy avoids ‘murder of crows’ clichés. His prose has momentum, an eye for intriguing surrealism and the unique poetry of local language. He frames parochial madness and those forgotten people, somewhere on the boundary between bathos and pathos, from the old men ‘smelling of pub and wet dog’ to the fellow who fires a shotgun ‘into the ice [but] could not kill the river.’ Occasionally the book is laugh out loud funny, often in demonstration of how the bored and lonesome mind turns to devilment, ‘he hates the cabbagey, condensationed nights when there is nothing to do but stare at the ceiling and tug on your plum until sleep comes.’ Having entered his father’s forbidden room and usurped his ‘holy ghost radio’ (an echo of myths from Oedipus to the Salmon of Knowledge), Enoch resolves to become a priest. Thrown out of the priesthood for the problematic fact of not believing in God, he then seeks to become a preacher with catastrophic results.

Murphy manages to raise rather than dash narrative tension by revealing early on that many deaths will follow. The problem, however, arises in the arrangement of the book’s chapters, which seems slightly rushed and disordered. Despite this, the scenes are richly descriptive and humanely characterised especially given their brevity. The countdown to the flood and how the corpses gather may drive the story along but the real substance of the book comes from brilliant but frustratingly-terse glances at deeper undercurrents. There’s the central inscrutability of other people, ‘not for the first time or the last, [he] ponders the mystery of the man who sired him.’ This finds its expression most abruptly in the act of suicide, which Murphy ponders, ‘Maybe a man slept too seldom and thought too much… Maybe a man numbed the pain with a little something, but that little something grew until it eclipsed the sun.’

For all its dark whimsy, Shall We Gather at the River is a deeply humane, funny, poetic and mortality-haunted book. It’s highly readable (a grave sin in some quarters) and highly thoughtful (a sin in others). It’s less an exploitation of the well-worn aesthetics of Revelations (after all the most emo as well as the most Bosch of the biblical texts) than a refutation of it. In a land where the holy ghost and damnation vie for attention with television and ego, Murphy masterfully conjures millenarianism, mythology, fraudulence and life-negation in small-town life. In these settings, the fear is not simply that the end of the world might occur but that it might not. And what strange, terrible, ludicrous lives we might lead, waiting to find out.

Darran Anderson is a writer from Derry. He co-edits 3:AM Magazine. He has recently completed books on Jack Kerouac for Reaktion and Serge Gainsbourg’s Histoire de Melody Nelson for Bloomsbury’s 33 1/3 series. He is currently working on a new poetry collection called The Fragmenting Man.