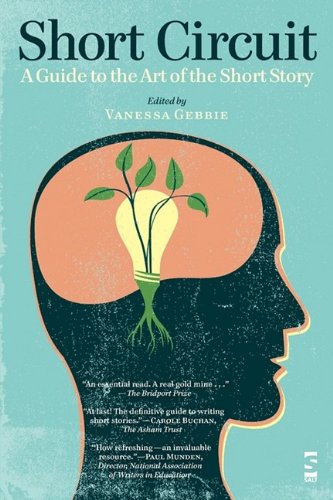 Short Circuit: A Guide to the Art of the Short Story

JOHN GARDNER USED TO CALL WRITERS the ‘favourite target of self-help fleecers,’ and there is truth in his belief that How-To books aimed at hopeful young scribblers, even those with the best of intentions, ‘are not very good’. No doubt with that in mind, Vanessa Gebbie has assembled Short Circuit as a practical guide, a handbook of exercises and recommended reading. Focusing on issues of craft and practice, there is little philosophical mumbo-jumbo about what it takes to be a writer; each of the twenty-four contributors assumes you already are one, and that you want to become a better one.

The essays derive from the experiences of published short-story writers, many of them prize-winners at national and international level. Several are also accomplished instructors, not the least of whom is Paul Magrs, who has taught at both Manchester Metropolitan and the University of East Anglia. With the hammer-blow of a veteran creative-writing teacher, Magrs delivers the kind of common sense every writer should internalise: don’t get ‘meta-discursive’; don’t neglect crucial plot beats or the passage of time; avoid adverbs as they betray hesitations on the writer’s part, but that’s how people talk so incorporate them into dialogue. Much of his advice is obvious, but it all needs saying, and the merit of his essay (true of Short Circuit as a whole) is in the rare, candid insights affords to the reader. Magrs has little patience for rookie mistakes or ‘half-cocked gos at flagging up your materiality’. His essay is aimed at an advanced level and intended to produce the kind of writer who can create characters that will ‘slip, and give themselves away’ or first person narrators who will ‘say things they don’t mean to’.

Clare Wigfall, herself a UEA graduate, also focuses on voice. One of her favoured tools is the ‘transportation effect’ of dialect, though a little goes a long way and one must be careful to avoid the unintentional hilarity of verbatim vernacular. She believes it is important to know when to take ‘the writer out of the equation’. Despite which, she is keen to emphasise the importance of preparedness, and while all of the contributors provide exercises, Wigfall’s character profile worksheet is undoubtedly one of the most useful.

Chika Unigwe and Lane Ashfeldt adopt a similarly hands-on approach to the difficulties of setting. A writer must ‘link the physical landscape to the mental landscape of the characters,’ says Unigwe, and the reader must be ‘shown the setting through the eyes of a character rather than narration’. Solid advice, though the Nigerian-born, Belgian-based novelist is wary of writing which overlooks ‘the thrill of the familiar’. On the other hand, Ashfeldt is mindful of the need to ‘give enough detail to convince, but not so much that you bore your audience or display inconsistencies,’ something particularly true of historical fiction, science fiction and fantasy. She offers several useful solutions, but the real strength of her contribution comes from the discussion of her own experience.

Nuala Ní Chonchúir, Alison MacLeod, and Marian Garvey provide a group of considered essays that are more theoretical in nature. Ní Chonchúir identifies the best writers as sensitive and nosy, good readers, good listeners, and ‘vivid dreamers, awake or asleep’. She provides valuable pointers on clichés, imagery and qualifiers to help novice writers tighten their prose and improve their style, though as she says ‘there is no big secret to being a writer of short fiction or anything else. You simply must write’. And yet there are always ‘good reasons not to write,’ says MacLeod, ‘but it is a greater gamble if you don’t write the story’. A lecturer in Chichester, and longlisted for the Frank O’Connor Award in 2008, MacLeod looks at the link between writing and risk-taking. In the short story, she says, you sometimes ‘need to be willing not to know, to let one sentence create or suggest the next’. The related issue of intuition and ‘the imaginative act’ is discussed by Garvey, who examines techniques whereby pure inspiration can be yoked to ‘the practical need for writers to improve, to get it right’.

But what is ‘it’? Alex Keegan proposes that, beyond plot and character, theme is what lies at the heart of good short fiction. ‘It’s what a story explains to us about the world, or forces us to consider,’ he says, introducing what he calls the ‘So What?’ test, an imaginary dialogue, as a means of distilling a story’s theme from an initial rattlebag of notions. It is useful, as is his other suggested exercise, using the ‘tone, colour, weight and speeds’ of words—the musicality of language—to convey meaning with more conscious intent than most new writers realise is necessary. Elsewhere, Adam Marek considers originality and how to target that ‘special gland’ of the reader which responds to the unexpected, while Sarah Salway and Elizabeth Baines look at ‘stealing stories,’ generating well-formed and aesthetically satisfying fiction from the shapeless, real-life narratives of strangers, family members or newspaper articles. All three tackle the old chestnut of where writers get their ideas from, but their divergent opinions merely reinforce the fact that there is no real answer to the question.

Gebbie herself, along with Elaine Chiew, weighs up some of the most difficult aspects of the short story: successful openings and gratifying endings. Gebbie’s take on how titles and first lines segue into character and setting is illustrated by an analysis of successful and unsuccessful examples. When it works, she says, it is a kind of alchemy, and the reader ‘is transported immediately into a fictive dream’. Like Magrs, she is unafraid to tell it like it is. Writing ‘takes graft,’ she says, at pains to deromanticise the process. The intent is not to discourage inexperienced writers as much as it is to comfort them; everyone finds it this hard at the outset. Chiew also emphasises the ‘remarkably hard work’ of writing, balancing ‘a sense of narrative expectation and engagement’ with ‘a degree of mystery and openness’. Her essay is intelligent and discursive, the work of a writer with a real feel for form. ‘How do you leave your stories?’ she wonders. ‘Can you entrust it to your character to let you know when it’s time to go?’ Dismissive of the trend towards epiphany endings, Chiew focuses on twists, circular endings and resonant conclusions. Packed with examples, it is one of the most useful essays here.

That said, with the range of subjects covered by Short Circuit, writers are likely to find at least one solution here for whatever weaknesses they perceive in their work. With all the contributors believing the best way to become a better writer is to become a better reader, the most valuable aspect of Short Circuit is that all the writers here have done their reading. As a result, their essays constitute collective decades of learning and experience, though of course the book’s best advice, dispensed by Graham Mort, is also the most self-evident: ‘don’t ever write anything you don’t really care about—life is simply too short’.

Grace at the Wall of Death