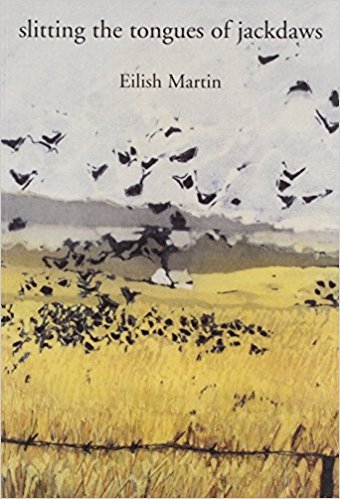 ‘Poetry is the history of the human heart,’ so says Billy Collins, the current Poet Laureate of the United States. It is the oldest of literary forms and continues today to crystallise human emotion. Two poets from Northern Ireland, Eilish Martin and Kate Newman, lead us through different windows into their hearts, lives and imaginations.

Born in Belfast in 1945, Eilish Martin has saved many heartfelt moments in her first collection, slitting the tongues of jackdaws. Her free verse poems are set both in nature and in harsher interiors. The title promises a painful song and, indeed, the themes of unbearable loss, breast cancer, and unhealed scars are given voice… ‘the shy recovery/ of things deliberately/ hidden.’

The muted cover by Helen Kerr sets the tone and almost blurs with the flapping of wings as a flock of black birds, ready to break a long-held silence, rise above a hayfield enclosed by barbed-wire. In this affordable collection, the substance and beauty of Martin’s work is complimented by the publisher’s attention to detail.

In the opening poem, ‘Of Earth and Air,’ the poet speaks to her mother. Martin imagines her birth but says that she ‘was born elsewhere … in the meltwater of a dream where you briefly stood your ground.’ It seems that she is living out a dream that her mother had to abandon.

Loss permeates this collection in many forms. From the unborn in ‘Miscarriages’ and the mother in ‘Waking’ with ‘her head full of the lullaby/her arms heavy without their load’ to sons who drowned in ‘Vocation’ and ‘Flaw’: ‘… his face as off-white/ as the unwashed wool cradled in her lap, / as oily, with the swelt of tears greasing his cheeks.‘ The narrative is reminiscent of the tragedy in Synge’s play, Riders to the Sea. Martin’s words are fresh and evocative:

And their women walking the shore,
tide tugging surf-shackled feet,
eyes skinned for boats black-
nippling the swell, ripe blobs of bramble fruit,
praying their incantations might pull the boats in
on rosary cords before the sea
would pluck and net them in tangle weed.

Loss is also evident in the poems about her father, and particularly in the title poem, ‘Sweet Afton,’ which in poignant tercets shows the bond between father and daughter. It is a testament to his love: ‘He told me once, when I was young / I’d slit the tongues / of jackdaws / thinking it would make them sing.’

But perhaps the best poem in this collection is entitled ‘Astray’ Its simplicity is arresting and true. Watching a parent lose his or her way from Alzheimer’s or senility is especially painful, and Martin captures this fragility with her tender images and flowing enjambment from start to understated finish:

I watched him like a child
watching for the moon
on moonless nights lost inside his coat
-not quick enough with silk
to turn it inside out.

An omen of breast cancer is foretold in the remarkable poem ‘Bruised’ when the narrator (as a child) observed a scar over her grandmother’s left breast. A story is told of enticement ‘ … by a man who smelled of mould and old tobacco’ and of a fall that left ‘ … a bruised strawberry / clotting close to her heart.’ The poem’s stunning last stanza gives the reader pause:

All that summer I lay
in the heat of her widow’s bed
wide-eyed while she slept,
looking at the bruised fruit
she wore pinned to her breast,
unsure of how to say
I would wear it for her
when she was dead.

The search for cures at healing wells in ‘Second Sight’ and ‘Encounter’ where she goes ‘ … to rock myself in a stone cradle for the cure … and no cure comes to me’ are desperate, and we are later led to painful rooms occupied by a woman, the ‘you’ the poet speaks to (her mother, a good friend?) who is dying from breast cancer (‘Waiting Room,’ ‘Recovery Room,’ ‘Discipline room’).

Sometimes the antecedent of a pronoun gets lost in poetry; it is a problem of clarity that can add to the of perfect shade on the pallet mystery but cuts down on communication. In ‘Remission’ the mysterious ‘you’ seems to be the dead mother to whom the narrator speaks who is ‘preoccupied by the rain-by the rogue pain/ in your amputated/ breast?‘ The pain of cancer might be a fate shared by both the living and the dead.

The benevolent power of ‘Kiloshine’ serves as a climax to the cancer poems. In it, Martin retells the tale of a ghost who comes back to her two infants who were buried together under the ruin.s of the old church at Kilosl1ine. The poem is infused with double entendres as the grieving ghost speaks: ‘Undone to the waist I bare the white scar/ tissue of a breast to the hungry mouths/ of children in the strip of ground/between two fields of winter…’

As I read Eilish Martin’s words across the Atlantic, I look to connect, to journey with someone very different than I. It is when I find those connections that l come to know the universality of her language and image, and, ultimately, the poet herself.

slitting the tongues of jackdaws contains, for the most part, disparate moments of loss and attempts to heal wounds that have formed over a lifetime. In my mind, the beauty of the collection lies in its diversity, its chemistry. There are many poems that I have ear-marked to re-read and re-discover.
‘Days of Abstinence’ is one of those. It has a god-like atmosphere as the narrator/ painter creates her world, yet it beckons with its intimacy and easy cadence:

I have put a girl by this woman’s side,
– a girl whose head is full of the figurine
on the mantel piece in the front room, a porcelain
dancer with eyes fired to an all-over white
intent on the door, listening for her music
so she can begin.

Eilish Martin has heard her music; she cannot be silent anymore.

Another first collection from Summer Palace Press is The Blind Woman in the Blue House by Kate Newman who was born in County Down in 1965. Many of the free verse poems in this collection are a result of her travels and, as such, seem to be the poet’s own inner journey, but, more often than not, they have the feel of an ambitious travelogue of names, places, and literary allusions. ‘Reclining Nude,’ though somewhat heavy-handed with alliteration in this excerpt, has a bitter sensuality that comes from trying to make a genius, Akhmatova, into an objet d’art:

It was a pity, he said, he could not read her poems…
Modigliani stroked linseed oil
onto her inner thigh,

traced her aureoles like pools
of perfect shade on the pallet
of Parisian noon.

Another finely crafted poem is ‘Female Tiger Escapes from Belfast Zoo 13th January, 1994.’ Newman journeys from a childhood of fear to a deeper understanding of the ‘unstill’ tiger in a cage. Her effective shaping of the poem’s stanzas is confining, and, therefore, one feels a keen sense of entrapment. Both the poem and the tiger’s pacing create a horrific quality that is driven by short, jolting lines:

Only humiliation left,
She hurled herself
From one side
To the other side,
Iron shadows thrown across her back
Like railway sleepers
In sinister animation.

It seems as if the tiger is a metaphor for unfinished women and their caged dreams. One hopes that in the tiger’s escape she has found … ‘Another place to be.’

Many of the poems in Newman’s collection, though, keep us at arms-length like secret vignettes not meant for interlopers. Some overuse repetition and listing like in ‘Let Them Eat Stones,’ ‘Expresso,’ and ‘Los Toros.’ And as much as I am a disciple of women’s art, I have, unfortunately, grown weary of poems about Frida Kahlo. ‘Giorria,’ the name of a constellation, however, has an intimacy that is tactile and disquieting:

I would make with you
sign language for turtle,
belly a carapace along your back,
safe everywhere swimming.

This collection has a number of memorable lines, but as a whole its language doesn’t communicate or capture us. We find ourselves lost in too many foreign locales from Mexico to Crete, trying to fit inside personal poems (all but four are dedications) that carry little meaning for us. The reader must matter, for the reader is to whom the finished work belongs. Like poet Stephen Dobyns writes: ‘a poem is a window that hangs between two or more human beings who otherwise live in darkened rooms.’ In other words, I believe in a meaningful connection that will move the heart of the poet and the reader.

I take exception to a recent review of The Blind Woman in a Blue House in Poetry Ireland Review that stated, ‘And what way, other than sympathetic, is there to read poetry?’ A successful poem, I feel, is one that you can imagine or empathise with, not be sympathetic toward. It is in the transference of the emotion that the reader takes ownership of the poem.

Laura Treacy Bentley is a poet from West Virginia. Her work has been published in Ireland (Poetry Ireland Review and The Stinging Fly) and in the United States (Art Times, Controlled Bum, among many others). She wrote a review of Dharmakaya by Paula Meehan for the Local Ireland web site. In the Untangling, her first collection, will be published by Salmon.