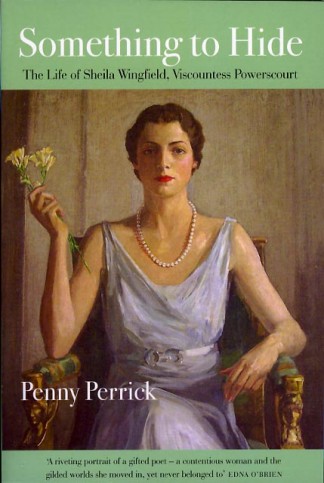 Something to Hide: The Life of Sheila Wingfield

Biographers can profoundly influence the public perception of writers. Philip Larkin was generally regarded as a national, if somewhat curmudgeonly, treasure until Andrew Motion’s biography revealed the murky details of Larkin’s pornographic correspondence with old school friend Kingsley Amis. But should the knowledge that Larkin liked to talk smutty about schoolgirls affect our reading of poems such as ‘The Whitsun Weddings’? Does it matter to our appreciation of his work that W.B. Yeats underwent the Steinach Rejuvenation procedure in 1932 to restore his sexual potency, a fact mentioned by many biographers?

Sheila Wingfield’s poetic reputation has not survived the passing of the years. Known, published and reasonably well reviewed during her lifetime (she died in 1992), she has been notably absent from most of the main anthologies of Irish poetry over the past four decades. She has fared better in some recent UK anthologies, however; Deryn Rees-Jones includes five of her poems in the Bloodaxe Modern Women Poets (2005) and places her early work in the imagist tradition of Pound and H.D. Indeed, she seems to be a favourite with Bloodaxe, as publisher Neil Astley selected two of her poems for his popular anthology, Staying Alive (2002).

Yet Irish anthologists have been strangely reticent about this Anglo-Irish poet whose work doesn’t seem to fit comfortably into any of the schools of Irish writing emerging from the twentieth century. I failed to find any mention of her in the mammoth Field Day Anthology, not even the volumes dedicated to Irish women writers and thinkers. Her work is still available, however, courtesy of online booksellers such as Amazon and abebooks.com and their long lists are testimony to her prolific output.

So we must turn to biography to find out more about this enigma and the facts of Sheila Wingfield’s life are clearly presented in Something to Hide, Penny Perrick’s entertaining new profile of the Irish aristrocrat and would-be literary lioness. She was born Sheila Beddington on 23 May 1906, the daughter of Claude, a wealthy Jewish stockbroker and Ethel, a bookish and eccentric scion of a down at heel Anglo -Irish family from Westmeath. Claude’s family were of Jewish stock but strove to bury the fact, changing their name from Moses to Beddington in 1868. According to Perrick, Sheila was equally uncomfortable with this aspect of her background, inventing an entire family history that removed all reference to Judaism when her youngest son, Guy, questioned her about it in the 1980s.

But then, Sheila was good at invention; her entire life had been spent presenting different versions of herself to the various circles in which she moved. As Lady Powerscourt (she married Pat, the younger son of Lord Powerscourt, in 1932) she was the chatelaine, hosting elaborate parties in the Great House in Enniskerry and consorting with the high society of pre- and post -war Ireland. As Sheila Wingfield, the poet struggling in her ermine-lined garret, she courted the leading writers, magazine editors and publishers of the day with steely determination.

One of the first to fall under her sway was the elderly patroness, Lady Ottoline Morrell, persuaded no doubt by assurances from Sheila that ‘You are unique… You are a voice. There are so very, very few.’ Ottoline, who had become used to being sent up by many of the writers who she had helped earlier in their careers, must have found this very comforting. She did not live long enough to have her illusions shattered.

Wingfield was less successful with W.B. Yeats, however. She sent him the manuscript of her first collection of verse, entitled Poems, in 1938, and asked for his opinion. The newly rejuvenated Nobel laureate, who always had an eye for an aristocrat, was gracious in his response, but was decidedly less gracious when he saw his comments reproduced on the fly-leaf of the newly published book two months later. A cantankerous correspondence followed, with Yeats threatening the arriviste with a ‘public protest’ at her ‘vulgarity’. Just how far he would have gone we’ll never know, as his death in January of the following year removed an obstacle from Sheila’s path; she continued to use his initial praise on subsequent collections. The assiduous courting of those most likely to help her writing career was to be a recurring motif of her life.

However, Sheila was also quite happy to spread slander about those who crossed her; according to Perrick, she invented a story about having met Yeats on a train where he acted boorishly, sneering that he ‘wouldn’t help a young poet if he were starving in the gutter,’ talking loudly of the habits of homosexual Galway fishermen and leaving Sheila to pay the bill for their shared tea. Sheila was to repeat this fiction as fact on numerous occasions and even included it in her memoirs.

Sheila’s husband, Pat, was also to fall victim to her capacity to rewrite history. In her memoirs, she would describe him as a drunken philistine who had attempted to quash her literary ambitions; Perrick’s book goes a long way to restoring the balance, presenting him as a simple and loving man, puzzled by the constant changes in his wife’s moods. Perhaps Sheila’s greatest cruelty towards her husband was to withdraw her funding from his beloved Powerscourt. It had been Sheila’s money that had been used for the upkeep of the estate; the Wingfields, like many of the Irish landed gentry, had been impoverished by death duties and the costs of repairs to their Great House. By 1960, Sheila had decided to stop investing in the bottomless pit and in 1961 Pat was forced to sell the house and estate that had been in his family for generations.

In later years, Sheila spent most of her life abroad, living in a suite of rooms in a hotel in Palma au Lac, a small town beside Lake Maggiore on the Swiss/Italian border, or in a succession of hotel rooms during visits to London. Although she enjoyed greater liberty now that she had unshackled herself of the financial burdens of Powerscourt and the emotion burdens of her family, the picture Perrick paints of Sheila in the last years of her life is a poignant one. Having been addicted to drugs all her life and subject to a variety of ailments, real and imagined, Sheila became increasingly dependent on a small circle of acquaintances that she hadn’t yet alienated and who sent her news from home. She remained avidly interested in her literary reputation; letters from friends in Ireland about a display of her books in Fred Hanna’s front window were particularly welcome, as were nosegays of sweet pea from her old estate at Powerscourt.

Her poetry became increasingly personal. After a lifetime’s work of abstract, impersonal poems drawn frequently from classical mythology, she finally began to address the sense of guilt and remorse that was increasingly plaguing her. Her final collection, the 22-poem Cockatrice and Basilisk which was included in her Collected Poems published at her own expense in 1983, contains this startling recognition in the poem ‘No Instructions’:

We die at the moment that we start to learn
Just what we are, just where to turn.

Sheila Wingfield spent a life pursuing her craving for literary fame at a huge personal cost both to herself and to those who most loved her; her greatest tragedy was not to realise the price she was paying for that most inconstant of mistresses.