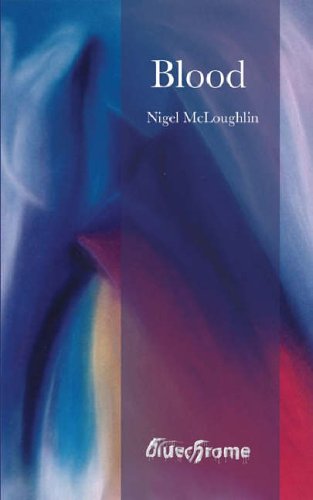 Songs For No Voices / Blood

Donegal-based poet Nigel McLoughlin finds himself in the enviable position of having had two collections (his second and third) published in the not too distant past. Although published quite close to each other they differ significantly. Chronologically, Songs For No Voices precedes Blood and so it is also in terms of the poetry; the latter collection adopting a visceral dark tone which seems to suggest a shift, even if only temporary, away from the more pastoral Songs For No Voices. Both collections are set out in sections, a method which serves Blood better than Songs for No Voices.

Songs For No Voices like much of McLoughlin’s earlier work, is firmly rooted in the landscape, sounds and lives of Ulster. One senses that it is not only the actual landscape that McLoughlin sees as important but his connection with it, his coming from it and the accent it lends his poetry. Although many of the poems are based in nature and the traditional, this is not because of any rejection of other things; that is to say, one should not assume McLoughlin to be simply a nature poet, or one who hankers only after what has passed. Rather it is his deep affection and respect for what is around him and where he comes from that leads him to concentrate on his immediate surroundings to realise his poetic vision. As part of this approach, in both of these collections, colloquial words and phrases exclusive to his part of the world are frequently employed (in Blood there is even a glossary at the end of each poem).

It is clear that McLoughlin views poetry as a craft that should be practiced and mastered. Embedded in his locality as the poetry is, the voice never becomes small-minded or petty. This is one of McLoughlin’s main successes. The aforementioned use of colloquialisms could in another’s hands alienate the reader from outside Ulster but McLoughlin’s poetry has an inclusive quality about it that allows one to gloss over these accented words, hoping to glean the meaning from the rest of the text. There is also a smattering of Gaeilge in the poems. Again, this suggests McLoughlin’s desire to reflect the meeting place of histories and cultures that is Ireland, in particular his own local histories and micro-cultures. He describes himself in ‘In Other Words’ as ‘a maker of poems’. (In Blood he gives this theme more depth).

He makes poetry from everyday scenes, from work for instance or from the lives of working people. He suggests the difficulties of the working life but he is at pains to show that these difficulties bring rewards, something more lasting, something that can be passed on. Maybe at times he appears too rooted in the past of a small place but again, his sincerity and commitment to his own work make that a very small criticism.

He treats poetry as a means in itself but also as a means of carrying on the traditions (often specifically Ulster traditions) he talks about. He often takes both sides, something which—especially in the context—helps him avoid making the poetry too cosy or safe.

The image is important to McLoughlin but it is always the image within ‘the form’. He knows how he wants to write, how he wants to present the poems and he mostly achieves this. When he delves into the private, deviates a little from the land and the locals, he becomes a more powerful and more universal poet. It is an underused strength of McLoughlin’s, one which hopefully he will rely on more in the future for it brings some of the best moments in this collection. The title poem demonstrates this wonderfully, with an economy and lyricism he is very good at.

‘Epicedium’ is another good example of this poet’s craft. He bases the imagery in something real and concrete (fishermen from his childhood) and ends with an almost spiritual image of the subject ‘making for the lough’ where the boat is waiting, ready for the water. McLoughlin’s form seems to have progressed from his roots and not just from the cold study of poetry. He does not surprise with avant-garde twists or surreal gestures. One gets the distinct impression he does not want to. In a steady fashion he is a modern poet, occasionally moving on from a sure footing to try things out, introducing new imagery, such as in ‘A Lumen Spento’ where he punctuates the poem with images such as ‘a Bhopal dream’ and ‘an industry of sorrow’.

Blood sees McLoughlin continue his connection between poetry and the land. He adopts however a different approach in this collection, scanning through invasions and a history of conflicts. The voice is darker than in his previous two collections yet maintains the theme of honest toil and work (even if that work is bloody) as being essential to the creation of poetry. If at times the images of toil and labour are a little earnest, McLoughlin once again shows his strengths as a writer and, without backing down from his intentions, finishes poems off with a flourish as in one of the opening poems ‘Voyage’,

….In any case we’d been drawn
too far from home to figure out how to go about turning back.

This sets the tone for the collection as the poet (both in character and in reality) delves deeper into the effects and consequences of history and tradition. Blood seems to represent for McLoughlin a gathering of ideas—invasion, colonisation and defiance—as metaphors for the writing of poetry.

In Blood the poet has gone back further than before to try to make sense of where he finds himself at present (and also where the world finds itself). Sometimes he hits the mark but other times the approach leaves the reader a little at odds with the need to attach relevance to so much mythology and local history in a wider context of contemporary geo-politics. The political context of the poems is obvious but there is a feeling that McLoughlin knows more about the subjects than the approach allows him to deal with. The idea of invasion and conflict is fine but there are so many other issues that remain outside the limits imposed by myth and legend. The localisation of these things seems to exclude many things, for instance the huge impact global business and economics has on politics and how in fact local politics really have little bearing on how the world is run.

These are again minor gripes, for McLoughlin inspires enough confidence in the reader that he is doing what he intended to and doing it well. To adopt the imagery of Blood, he has chosen his battleground and selected his weapons carefully, marrying them to his abilities. He writes from a specific Ireland, somewhat out on the edge. It seems a different place to the post-Celtic Tiger landscape of shopping centres and industrial estates. He has sourced a poetry from his surroundings, dispensed with much, and forges ahead in a style one imagines he fully intends. There is a deliberate nature to his writing, a forcefulness and even a slight stubbornness.

There is an unspoken defiance in both of these collections, the belief that things McLoughlin holds dear will endure (the Irish language, Ulster dialect, old customs and values and not least hope). He does not ask that the reader agree with him and he does not make too many statements exclaiming one thing to be better than the other. He does seem to hanker for the traditional, although his writing shows signs of him pushing himself, albeit within self-imposed limits. It is this objectivity and commitment to his subjects and chosen form that gives McLoughlin an edge over other poets working in broadly the same area. One can feel safe in saying that he is here for the long haul, striving to be both individual, in the present and also part of something that crosses over temporal boundaries, and that he will not be ‘muffled and huddled in the flux of the stream’ (‘Legends’, Blood).

Alan Jude Moore is from Dublin. His most recent collection was Zinger (2013) from Salmon Poetry.