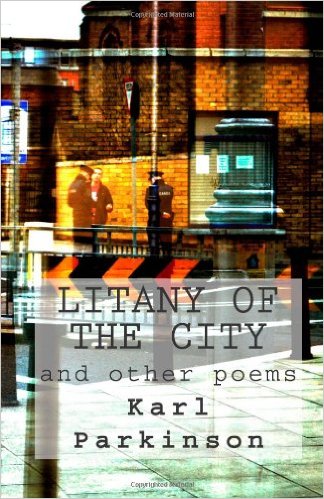 The Sun King / Litany of the City

Conor O’Callaghan exhibits an almost Shakespearean tendency to render reality not only by means of literary devices but in terms of those very tropes and conceits. Again and again in this his superbly reflexive fourth collection parts of the world are compared to linguistic concepts, to word-play and language-stuff, to punctuation, metaphor and translation. ‘In Praise of Sprinklers’, for instance, memorably suggests how ‘Spring resembles / a crossword left unfinished on a stoop / while sassafras / gets looked up’, even as ‘Translation’, surely one of the collection’s standout achievements, invites the reader or dedicatee to ‘Imagine you are this poem /moments before it is translated’, to track an irresistible but terrifying reconfiguration into something only half-understood. In ‘Comma’, meanwhile, tenor and vehicle are thrillingly unsettled—does the comma serve as a metaphor for the bulging ‘blip’ of a rain-cloud? Or is it vice-versa, or both or neither?

In The Sun King the putatively real and the purely verbal change places many times, leaving it a book preoccupied—perhaps even obsessed—with how poems get made, with the ‘translation’ or crossing over from the world to the word.

This is powerfully enacted in ‘Wild Strawberries’, an exquisitely summery vignette that luxuriates in both the scent of the titular fruit and in the ‘handful /of neighbourhood girls / hanging in the street’. The poet insists on the extra-verbal nature of these phenomena, on their old-school physical reality, even as we sense them waft their way into his tiny word-engendered universe: ‘I lie to myself. / They’re not metaphors. / They are not metaphors’.

Since 1999’s Seatown O’Callaghan’s work has grown increasingly self-reflexive and self-reflective. That tendency continues here. Indeed recent Irish poetry will have seen few collections where so many individual poems are so preoccupied with the methods of their own construction.

‘Swell’ worries blissfully at its own foundational anecdote, while ‘The Pearl Works’ commences with the blueprint for its own assembly. The effect of such reflexivity is like kissing a lover whose tongue perpetually squirms and wriggles, curling and arching in an effort to taste itself. It is an experience far more pleasant than might be supposed.

There is a temptation to locate The Sun King in the line of Wallace Stevens, one exacerbated by how the master is both conjured and parodied in section 17 of the ‘The Pearl Works’: ‘It was February all June. It was raining and it was going to rain. / The blocked bard and sa muse anglaise amused themselves in the Royal Marine’. For O’Callaghan, like Stevens, sets up camp in the foggy borderlands between what might be called interiority and the impregnable real.

Yet his collection has its political moments too. ‘Tiger Redux’ reworks William Blake into a witty and spirited elegy for Celtic Tiger Ireland:

All that jouissance, that juice.

(signed away and midweek pushed),

all that feeling central, flushed.

All that North Atlantic bling’s

rising tide, the waves and boom

charging in another room.

This is more wistfully ambiguous apologia than full-throated celebration. Yet it is in its own way a timely intervention, a corrective to the many Irish scribes who both during and after the Celtic boom resented the wealth, confidence and opportunity it brought to many (but not all) previously wretched strata of their society. Though its trochees, perhaps, overstay their welcome by a stanza or three, ‘Tiger Redux’ earns its place alongside Seatown’s ‘East’ as a signature take-down of Irish cultural assumptions.

We live during the presumed apotheosis of the serial, in a time when we’re tiresomely reminded that were Shakespeare and Stevens alive today they’d be writing dialogue for Mad Men or Breaking Bad. It is perhaps fitting, therefore, that O’Callaghan caps his collection with ‘The Pearl Works’, a serial poem that originated on Twitter and one created under several most unusual constraints: a new section would be tweeted for every week of the year, each would use the tweet’s full allotment of 140 characters, each would be a rhyming couplet.

However, stripped of handle and hashtag—as it is here—what’s striking about ‘The Pearl Works’ is less its origins on social media than the serial nature of its publication. Of course the defining nature of such serial work is that earlier sections are in the public domain—often indelibly and unalterably so—before later ones have been completed or even conceived. Its special terror and beauty stems from the improvisation it demands; from the need to balance responding to current stimuli with faithfulness to what has gone before, all the while remaining focused on the work’s projected future direction.

This is something O’Callaghan does extraordinarily well. At first glance the sequence seems breezily episodic and journalistic, a series of responses—sometimes quirky, sometimes sad—to weather and travel, to working life and implied family drama. Yet repeated reading unlocks a system of chimes and echoes, a complex network of connections that spans its constituent parts. Loops begun in February find closure in November. Seemingly throwaway entries have their significance amplified by later ones. An image seeming entirely of the moment trigger a memory and sends us flipping pages, searching for its cognate months earlier. ‘The Pearl Works’ surely represents O’Callaghan’s finest hour to date. It is, like the collection it closes, a superb achievement, one that echoes with the creaking sound of a bar being raised.

Like The Sun King, Karl Parkinson’s Litany of the City centres on a long and ambitious poetic statement, a key-work that acts as a hub or server connecting and empowering the collection’s other texts. His twenty-page-long title poem is an extravagant rant that’s sweaty with lust and appetite. A ravenous screed, it mimics the ‘mean bastard’ city it describes in its insatiability, in its frenzy absorption and expand. Yes in these pages Parkinson is a hungry poet, one in a hurry to psychically digest and excrete on to the page everything he’s seen, touched and tasted; the things he’s done and that have been done to him. He wants to parade them all before us, all the victims, saints and scum.

His hunger extends to language itself as he sucks up entire registers, both poetic and profane. The modes of fantasy and autobiography are assimilated and often thrillingly mashed up, for instance in the image of the city girl ‘sucking stanzas from my throat / they sink into your belly and hide in your womb’. ‘I will put the weight of my words on your back until you start to shrug’ he tells the city, but such heightened apostrophes rub shoulders with the trash of everyday discourse, with phrases like ‘City girl, / wishes it was her marrying the football star / in Hello magazine on a plastic throne’. For Parkinson takes in both the filthy and sublime, both the girls who view their bodies as a ‘playground for beasts’ and the church bells that ‘rang in the living Van Gogh morning’.

It almost goes without saying that Allen Ginsberg (name-checked in the title poem, in several of its satellites and on the book’s epigraph page) is a major precursor here. Indeed Parkinson’s ‘Litany’ and the poems that surround it would be unimaginable without Howl as an exemplar. Yet perhaps the poem’s true forefathers are Patrick Kavanagh (name-checked in the charming lyric ‘Poetry Class’) and T.S. Eliot (not name-checked but maybe shouted-out-to in a section title). For ‘Litany of the City’ lies very much in the tradition of both The Great Hunger and The Waste Land, presenting Dublin, though it could be any city really, as an ever-expanding chamber of horrors, as a zone of multiple sterilities where the lives of young and old alike are broken and made bestial, where potential vanishes like a beer-buzz.

If O’Callaghan’s work represents triple-distilled refinement then Parkinson’s is hooch of a different colour: furious stuff spiked with Mitsubishi-stamped tablets. It’s a bitter but invigorating brew: he gives us the ‘B Class’ where the school stashes its geeks, freaks and weirdos, ‘An Urban Elegy’ with memorable tales of Tipex-sniffing, and ‘Danger Dessie’ who, aged eight, watches his father die in a fifth-storey flat, ‘cigarette in one hand / can in the other’. All this is presented with a vitalising sorrow and rage, but also with what can only be described as a sense of fun. Bruce Springsteen (definitely not name-checked) comes to mind here, especially the work from the Darkness at the Edge of Town era. Parkinson, like Springsteen, is willing to party while he preaches and shares with Asbury’s finest a fury at the world that is conditional rather than constitutional.

Parkinson’s origins lie in the performance poetry scene, on which he has been a central player for several years, and several of the pieces gathered here betray their origins in performance perhaps a little too readily. Others, however, survive the dreaded transition from stage to page with their intensity levels more-or-less undiminished. It is to Parkinson’s credit that he avoids the ‘length creep’ to which performance poets so often succumb: poems written for the stage need to stick around for a while, establish rapport, get to know the people they’re being shouted at. Parkinson, however, manages to interleave his longer works with exquisitely turned lyrics like ‘Winter Prayer’ and ‘Death Cuts Down the Flowers’.

The OED defines a litany as a ’prayer consisting of a long series of invocations and supplications’ and there are times when Parkinson falls foul of repetition. ‘Litany of the City’ itself, and several of the other long pieces, are relentless in their deployment of anaphora, with stanza after stanza beginning ‘O city’, or ‘I am the Revolution’ or ‘This Poem’. There are moments when this is demonically hypnotic but there are also deadening stretches. Unfortunately, it becomes something of a go-to technique for Parkinson. The opening of ‘New York Fragments’, for instance, sketches a subway scene wrenching in its specificity before retreating into a familiar anaphoric chant ‘this city… this city… this city’.

With such repetition comes an over-reliance on sentence fragments, which denies him both the silken interplay of clauses found in the work of say, Leanne O’Sullivan and the radical discontinuities of a recent experimental work like James Cummins’s Flash/Bang. A final negative: there are moments when Parkinson is unforgivably self-aggrandising. In ‘New York Fragments’ he compares himself to Joy Division singer Ian Curtis, canonising himself as a doomed outsider artist, while smugly dismissing the ‘caricatures’ he’s been drinking with. Elsewhere he describes himself as the ‘poet laureate of city streets’ and promises to forge a dead friend’s ‘name and image in the annals of immortality’. It would be no harm, as they say, if this type of thing was toned down a bit.

For political poets developing a treatment plan often proves more challenging than diagnosis. Eliot, Kavanagh and Ginsberg responded to their age’s sterility and emptiness through some form of received or organised religion (be it Anglo-Catholic, Roman Catholic, or Buddhist) mixed with a nebulous but deeply-harboured sense of spirituality and, of course, a belief in the redemptive power of art itself. Parkinson has only the second two.

He urges his city children to ‘be rebels’ to ‘believe in love’ and to ‘lift up [their] river washed hands / and sing hallelujah, hallelujah.’ The ‘wordsmiths tapping the keys of the eternal typewriter’, he believes, will ‘heal the human heart’ as they ‘blow the sacred smoke of vowels and consonants.’ Such a utopian blueprint, while rhetorically powerful, is also frustratingly vague.

It will be interesting to see it gain crispness and definition as the poet evolves over the next several years, as he continues to absorb new discourses and influences, new modes of craft and self-expression.

Billy Ramsell’s most recent collection of poetry, 'The Architect’s Dream of Winter', appeared in 2013. Over the years he has published poems, articles and translations in 'The Stinging Fly' and was a guest editor for Issue 32 of the magazine.

Sex Without A Face