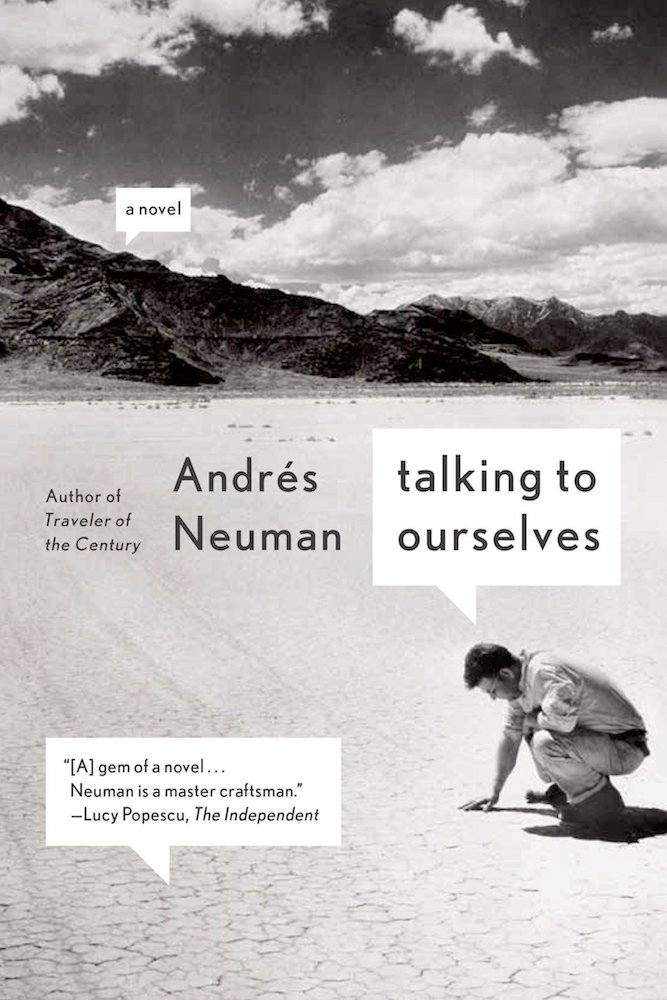 Talking to Ourselves / The Insufferable Gaucho

‘All writers learn from the dead,’ Margaret Atwood writes. Grab any book, and this tuition can be more or less obvious, as well as more or less pleasant. In the best case, it will give you an itch to read more. At worst it’ll make you feel lost. Most of the time, it’s a little bit of both.

This spring saw the English-language publication, and re-publication, of works from two authors who make conversation with the dead its own art form. Roberto Bolaño died in 2003, leaving behind enough material to keep his publishers and translators busy for years to come (The Insufferable Gaucho was first published in English in 2010 by New Directions). The younger author—also a transatlantic émigré—Andrés Neuman, is very much alive. In their writing they continue to not only speak to each other but—it seems—with every author that’s ever made an impression on them.

In Talking to Ourselves, Neuman uses three voices and parallel chronologies to tell the story of a small family in crisis: Mario, terminally ill with cancer, takes his son on a road trip to give him one lasting happy memory. Mario’s voice-recordings to his son—made after their return—sit alongside the son’s immediate impressions during the journey, and the thoughts of his mother, Elena, documented at home during and after the trip. As the novel itself depends on the trip eventually coming to an end, the journey becomes a narrative stem: both an escape and a confrontation.

Neuman effectively uses this triangle of perspectives, making each reflect the story’s core themes. They are three modes of language—speech, writing, inner monologues—and the sad and beautiful paradox lies in their isolation. These narratives are filled with concern for loved ones, yet they are also brutally honest about the intrinsic selfishness of love. Nobody understands this better than Elena, the mother. ‘A child is literally an investment’, she tells her appalled sister, and just like adults, children also ‘speculate with their love […] if I’m nice to Dad I’ll have a few days of credit; if I’m nice to Mum the two of us can negotiate with him.’ Elena holds illness by the hand. Through her, Neuman highlights love as always beginning with the self. Someone’s need for you brings the gratification of being needed, and caring for a loved one in their suffering also comes with the awful relief of that suffering’s potential end. All of this is love, and Neuman dwells in it with a clear prose which is also deeply sympathetic; it invites its readers to look into harsh mirrors without lapsing into cynicism. Perhaps this is the reason I find the sections narrated by the son, Lito, the weakest. Next to the self-deprecation and honesty of the others, even a child occasionally comes across as much too oblivious. Interestingly, these are also the only instances where Nick Castor and Lorenza Garcia’s otherwise so elegant translation chafes at the seams.

Throughout Talking to Ourselves, Elena dedicates herself to reading, and we read along with her. Rather than a writer quoting favourites, this is the free association that comes with every first-read. She applies every line to her own situation, and the specificity of these small introductions makes the reading contagious.

It won’t be news to readers of Bolaño to learn that a whole army of dead writers appear in The Insufferable Gaucho, translated by Chris Andrews. This is an oblique, and surprisingly fluid, combination of five stories, a lecture, and an essay. The result is seductive. Throughout, Bolaño continues to speak to other writers, some living, most of them dead. The second piece—which gives the collection its title—is a reply to the story ’The South’ by Borges, and the final essay is a call of discontent aimed at idealised notions of Latin American literature, and why best-sellers sell.

Bolaño confuses me; his writing often overwhelms, and I have yet to find a definite reason why I keep returning to it. There’s the posthumous-fame phenomenon, of course, but if anything that should put me off. There’s an illusory simplicity in stories such as ‘Police Rat’, in which a rat working as a police officer investigates a murder in the sewers. It seems he’s the only one seeking the truth, whilst the wider rat-community prefers to remain in the literal dark. The story appears neatly tied up on the level of pace and rhythm. Still, it continues to demand attention, perhaps another read. There’s also, with Bolaño, a desire to say it all, say it in the way that will hit hardest, and say it now. The lecture ‘Literature+Illness=Illness‘ has anger, irony and despair shooting through it like a transatlantic jet-plane. Individual references may get lost in the momentum; you won’t catch all of it, but it’s undoubtedly a unique experience. Above all, you’ll know for sure that here was someone who really did have things to say, and there was never time for beating around the bush.

As with the rest of Bolaño’s work, it’s difficult to be done with The Insufferable Gaucho. His lecture on illness begins with a fateful medical appointment, then heads into a ridiculously huge lift which will take the author to a series of tests. Within the walls of this lift Bolaño manages to squeeze the word and the idea of ‘illness’ for all its worth, holding it up to the light and testing it from unexpected angles. There’s hardly a more appropriate vehicle for such a journey. The lift goes up and down endlessly; it is meant to be revisited.

Literary pantheons are only interesting if they say something about the personal and the specific—if they, as well as talking to themselves, also speak to the reader’s day-to-day reality. Both of these books exemplify how our night skies of literature come together—a conglomeration of where we’ve been, by whom we’ve been taught, and in which language—speaking as much through representation as through negligence. Heavy with titles and names, writing like this can become dense and alienating. A happy alliance comes to depend on how well the backdrop of the dead is balanced with a creative present, allowing true reflection. Necessity, I think, is key: both these books turn to other books when in need. At her husband’s death bed, Neuman’s character Elena picks one book after the other, reading hungrily, using books in whatever way they help her survive. Unsurprisingly, one of the texts she picks up is about illness, an essay published in Spanish in 2003 by Roberto Bolaño. It was, supposedly, the last book he prepared for publication before his death.

Jessica Johannesson Gaitán's work has recently appeared in Litro Magazine and the Island Review. One of her stories was a winner in Glimmer Train’s Open Fiction contest, autumn 2016. Originally from Sweden and Colombia, she arrived in Bath via Edinburgh.

All Five of Us