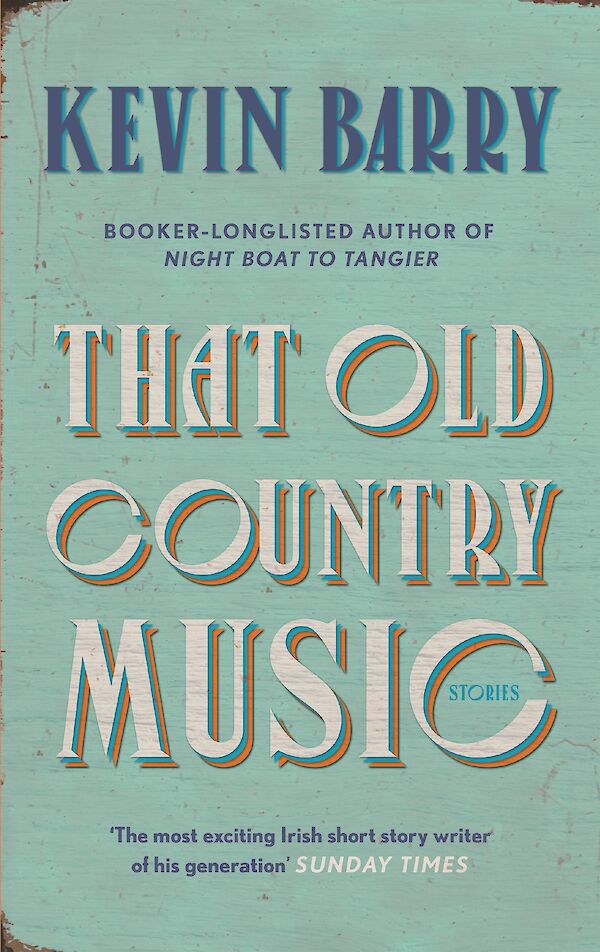 You should read this collection at least twice. The first time, horse it into you—then study the technique.

That Old Country Music asks where artists get ideas, and what they should do with them. The characters live mostly in the west of Ireland, with the odd urban interlude and Extremadura for witches (why not?). Only some are aware they’re trying to make something, but they all must reckon with their surroundings and invest themselves in outcomes they cannot control. It’s a bit like love.

It’s a lot like love, actually, in the first story, ‘The Coast of Leitrim’. If a Kevin Barry character declares themselves a romantic, they’re generally headed for trouble. Self-styled aesthete Seamus’s ideals threaten his relationship with Katherine, a Polish waitress. His delicate soul can’t handle her bulky knees—inverting Barry’s first novel City of Bohane, where a wife’s wonky eye is endearing. His fitful temperament sabotages him, too; what kind of a maniac could fall for him? Another self-declared romantic has a hard time of it in ‘Deer Season’, where a girl, ‘almost 18 and determined to have a fuck before it’, pursues a sombre Englishman around Sligo’s Ox Mountains. The girl’s project comes from ‘a spell of heavy dreaming or quietude such as can open out sometimes in youth if the person is to be an artist’. She knows well enough it’s the idea of him she’s after: the noble depression, whitethorn trees, tragic loss of fiancée, et cetera. Barry is no stranger to genre, most recently noir in his novel Night Boat to Tangier; this protagonist thinks she’s a Brontë heroine when she’s actually in a Western, with an irate father who’ll run the man out of town.

Neither Seamus nor the girl is prepared for the story their place provides, but in ‘Ox Mountain Death Song’, Sergeant Brown knows that young Canavan, from a notorious local family, will inevitably turn renegade. He pursues the lad with a murder ballad’s propulsion. The Canavan line’s danger is almost thespian, built on tics, costume and instinct: ‘Everything was passed down, the gestures even … only the trousers changed’. Sergeant Tom Brown’s artistry leans more towards music when he steers his Primera with an intuitive feel for his quarry’s rhythms. In ‘Old Stock’, too, the character gives into place: he inherits, essentially, a sex cottage from his uncle, a house where visitors get mysteriously in the mood. It’s all a bit much for him—not to mention the scenery banjaxing his prose—and he realises that since a place exerts its own influence, if you don’t want that influence then it’s best to move on.

Then ‘Saint Catherine of the Fields’ shows what happens if you follow a story’s pull. The narrator is the least like any other in the collection, an academic who explains laboriously what ‘sean-nós’ means, and says—rather than the fifty more colourful ways any other character might say it—‘the man … was really quite drunk’. His excuse? That’s what Dublin does to him, and sure enough in Roscommon he loosens up: ‘Whoever was shaving the poor devil had their mind on other things’. Barry voices the geographic fatalism of the previous stories explicitly here: ‘Anyway, as the song made clear, we have no agency in our romantic manoeuvres—the decisions are all made for us, without our even knowing. The decisions are out there already, on the air.’ As much as the big smoke might be to blame for the drab tone, it’s not a moment too soon when we return to a more conversational narrator in ‘Toronto and the State of Grace’. Beauty comes laced with pitch-black humour: ‘These are the lion’s mane corpses … as if there’s been a genocide out there. They look like pink foetal messes flung about the sand and rocks—kids call the place the abortion beach …’ The last man chased ballads and this one cannot for the life of him avoid being in one—he physically cannot leave the bar he’s tending, and ends up having to narrate an unwanted conversation, then a death.

You’ll notice a rhythm forming: a main character wants a story, then the next doesn’t, though over the collection they get better at realising that the tale will come or not of its own volition. Sure enough, our next hero is mad for stories and maximally resigned to fate. ‘Who’s-Dead McCarthy’ will tell you just that, who’s dead, in detail. Con is bard and method actor in one, a different face for each tale, retreating into his overcoat to become moved by the deaths of virtual strangers. He relishes the slapstick demise: ‘He’d come sauntering along at noon of day, now almost jaunty with the sadness, the eyes wet and wide, and he’d lean into you, and he might even have to place a palm to your shoulder to steady himself against the terrible excitement of it all.’ His is a less romantic take on sean-nós than in ‘St Catherine of the Fields’, but he leads with intrigue, then approaches the climax with teasing digression. There’s foreshadowing and a killer last line: ‘and the neck is broke on the man’. Rather than distracting from death with narratives, Con turns death into one. The story isn’t really about him; it’s about the narrator’s shift in acceptance, so that by the end, he, too, sees mortality as material.

In keeping with the collection’s zigzag rhythm, right after learning one thing, we learn the opposite; ‘Who’s-Dead McCarthy’ looks doom straight-on, and the next story, ‘Roma Kid’, gives us hope. The titular girl flees Dublin on a train and seems headed for disaster, but she soon forms one of Barry’s characteristic odd pairs with a strange elfin man who looks after her. We’re saved from mawkishness by attention to detail, right down to the famished child’s focus on the doughy smell of a blueberry muffin. Rather than having a correct or incorrect set of narrative expectations as most of the others do, this character finds her place through sheer instinct. Then, with mathematical balance, ‘Extremadura (Until Night Falls)’ shows us a man in Spain fleeing the family ties that the Roma girl finds, needing to step out of his place to step out of his life. In the title story ‘That Old Country Music’, a seventeen-year-old girl (another of them; the collection is full of pairs, foils, echoes) waits for a shady man to finish robbing a petrol station so they can elope. Moved against her own will by the green fields, blossom, pines and morning wind, this protagonist is the latest to find themselves in a tradition not of her choosing.

Finally comes rock bottom, powerlessness, surrender to place—and, once that’s in order, language. ‘Roethke in the Bug House’ echoes Barry’s novel Beatlebone, where John Lennon travels to an island for an artistic retreat. Here Barry riffs on another real person, American poet Theodore Roethke, who went to an island off the Galway coast, had a breakdown and went to hospital. The tale has intrigued Irish writers from poet Richard Murphy, who wrote about it in his memoir, to Elaine Feeney, whose poem ‘Roethke takes the boat to Ballinasloe’ was published in the summer 2017 Poetry Review. In Barry’s story, the local music rises in Roethke—the sour notes of August , the eerie wind. Roethke comes to feel, like so many of the characters, that towns have their own emotions. His mind no longer belongs to him. Nor does his hand, but in the end ‘it makes words’.

Often Barry gives away the plot up front so we can focus on characters, sunsets, what’s said and what’s not. As in earlier collections, he curtails lyricism with barbs, but it feels closer to the characters’ voices now, rather than an author absolving themselves of schmaltz. Here he is in the title story of his first collection, There Are Little Kingdoms: ‘I floated above it all, pleasantly distanced, though the streets were as dumb-witted as always that day, and the talkshops were a babble of pleas and rage and love declared, of all things, love sent out to Ukraine and Chad.’ The present Barry can give us an influx of feeling without distancing it from the narrator’s voice. In ‘The Fields of Leitrim’, the mountain’s languor, hazy Provençal blue hills, warm lake and midge bites are both an amusing compilation and one that Seamus would make. Much of the comedy is gentle, familial, and the characters have a dignifying privacy that lets them surprise us and even themselves. And in the phrase ‘There Are Little Kingdoms’ lies, to my mind, the main difference between what he’s up to in his stories and his novels: he leans entirely into the world-building in the novels, inventing practically a new language for each, while the little kingdoms in the stories are just that, microcosms situated in something bigger. In City of Bohane Barry imagined a future without technology; here it is seamlessly present, so that not even Siri can ruin the romantic landscape: ‘He spent the best part of the next day roaming the wind-swayed fields of Google, searching out voice-recognition apps … and he had her night words got, or at least he had them got in a loose rendition.’ Her night words got! What a sentiment, and one echoed in ‘Saint Catherine of the Fields’ when the narrator records ballads. This Ireland isn’t soft or easy, but we have to face it: ‘Love, we are reminded, yet again, is not about staring into each other’s eyes; love is about staring out together in the same direction, even if the gaze has menace or badness underlain.’

Naoise Dolan is an Irish writer born in Dublin who studied at Trinity College and Oxford University. Her writing has appeared in publications including The London Review of Books, Vogue and The Guardian. Her debut novel Exciting Times was published by W&N and Ecco in 2020.

A poem about rioting