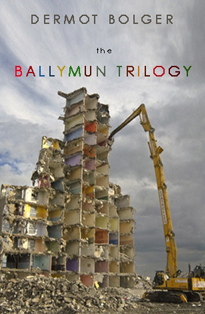 Of all the places in Ireland, why did Dermot Bolger choose to write extensively about Ballymun? The pragmatic answer is that Ray Yeates, the director of Axis Arts Centre, asked the famous playwright to tell the story of the town as a part of the social regeneration plan. But there is also another, more sentimental, explanation. Dermot Bolger spent his childhood in Finglas, only a mile from Ballymun, and as a small boy he watched the town being built. He gave his first public poetry reading in the basement of one of the tower blocks and over the years he became friendly with the tenants. In the introduction to The Trilogy, he mentions his friendship with Tom Casey who, having returned from England, was housed in Ballymun. Tom and his wife felt imprisoned and dejected in their tower block and tried to deal with life in two contrary ways: while the man spent most of his time out of the flat, his wife stayed indoors, choosing confinement and isolation.

Tom and his wife seem to be archetypes of Christy and Carmel, a married couple from the first part of the trilogy. Bolger draws heavily on real people and their life stories for the material of all three plays. In this way, he creates the notion of common men and women whose failures and successes add to ‘the collective experience of Ballymun.’ Although the trilogy is about individuals and personal experience, it offers the fullest account of the satellite town ever given. The second play in the collection, The Townlands of Brazil, sets the time frame for the book. Beginning in 1963, and illuminating life before the high-rise flats were built, it ends in 2006 with the towers being demolished. The other two plays fill out this frame with scenes that capture the transformations of Ballymun during this period.

The changes are epitomised by the seven towers. The hope of economic revival in the 1960s is mirrored in the treacherous excitement of new tenants with their modern facilities. Their disillusionment, following another wave of emigration in the 1980s, is accompanied by a mutation of the towers into a nest of poverty, drug addicts and suicides. Finally, the Celtic Tiger initiates another change, marked by demolition of the high-rise flats and the appearance of new apartments, often rented by immigrants.

Unlike M.J. Hyland in Carry Me Down, Bolger offers the towers as a more complex and meaningful symbol, one which goes beyond issues of social degradation. The playwright alludes to the biblical Tower of Babel, as another example of a social experiment gone wrong, and describes Ballymun as a Dante-esque hell on earth. The characters often refer to the Towers as a prison, a cage where death is the only way out. The high-rise flats, crammed with disillusioned and doomed residents evoke the image of Ballymun as a ghost town, which is reinforced by making the dead central to the stories and by introducing phantasmal characters such as Sharon or the Junkie, the emaciated teenaged drug addicts, who agree to be sexually abused in order to gain drugs. In fact, the enduring presence of the dead, combined with the names the characters give to the Towers such as Ard Glas (Green Heights), The Promised Land or the Townlands of Brazil, dramatise a human space that is neither Heaven nor Hell but somewhere lost in between.

The first part of the trilogy, From These Green Heights, offers us the interwoven stories of families hopeful for a new start. The enthusiasm of a young working class couple who move to the tower with their five-year-old son, Dessie, acts as a foil to the resignation of a divorced woman with two daughters, for whom the new home denotes a social decline. Although Bolger’s use of images for urban decay—a miscarried baby, a broken doll’s pram, dead pigeons—may seem a touch hackneyed to us nowadays, the play is still a vigorous study in social inequality, disillusionment and drug addiction against a background of a community determined to survive.

These themes reappear in the second play, The Townlands of Brazil, which also brings to mind two recent bestselling stories, that of Eilis Lacey, a girl leaving Ireland for New York in Colm Tóibín’s Brooklyn, and Ania Prasky, a poor Pole who comes to this country in search of money in Meave Binchy’s Heart and Soul. In The Townlands of Brazil Bolger collates these two types of characters, telling the story of Eileen, forced to emigrate to England when she finds herself pregnant and out of wedlock in the 1960s, and contrasting it with the story of Monika, a Polish immigrant, who works in today’s Ireland to support her daughter. By drawing parallels between the experience of the two young women, the playwright outlines a set of poignant observations on migration.

The final part of the trilogy, The Consequences of Lightening, sets out to re-examine traumas of the past and to explore future potential. An encounter between a group of old friends by the deathbed of the first tenant of the towers becomes an opportunity to disclose their innermost secrets and perform something like shock therapy upon themselves. They experience a kind of catharsis by accepting their past failures. The rituals of the wake lead them to a metaphorical moment of confession that may mark the start of their new lives in the transformed town. As Katie, one of the characters notes, ‘Ballymun grew up and we grew up too. Ballymun is starting out again.’ On that positive note, Bolger ends his trilogy whose parts were staged by Axis on the occasion of the phased demolition of the towers.

The Ballymun Trilogy, which sets out to document the social changes of a small satellite town, appears national, even international, in its consciousness. The profound issues for the community of Ballymun can easily be removed from a purely local context and be considered against the background of a dynamically developing Ireland, which gives Bolger’s work a much broader meaning and value. In the trilogy, as in a Cubist painting, themes such as belonging and urban degeneration are highlighted from diverse angles. Bolger once again explores the past as a means to describe the present while also finding a way to introduce a variety of distinct voices, endowing his analysis with unusual depth and human warmth. With his characteristic blend of nuanced local sentimentality and hard-hitting language, he makes a very important and engaging comment on contemporary Dublin, and Ireland as a whole.

Joanna Kosmalska is pursuing her PhD at the University of Lodz, Poland. Her current research focuses on contemporary Irish literature. She teaches literary translation and is the author of numerous translations, a recent example being The Day of Chocolate, the ScripTeast Award winner at the 2010 Cannes Film Festival.

The Weirdness of Dead lnfantas

Love Scene In The Rambla