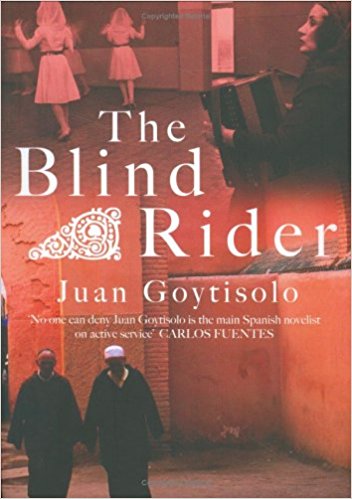 Juan Goytisolo has said that The Blind Rider, the semi-autobiographical tale of an old man grieving the recent death of his wife and meditating on some of life’s fundamental questions, will be his last novel. If true, the world of literature in general, and of Spanish letters in particular, will be a much poorer place. In a writing career that has spanned six decades, Goytisolo has worked in various media: fiction, autobiography, essays and journalism. His work has been lauded in many quarters and his fans include the Mexican writer Carlos Fuentes and the Peruvian writer Mario Vargas Llosa. The former has described him as ‘the main Spanish novelist on active service’ and the latter as ‘…one of the most rigorous and original contemporary writers.’

Goytisolo’s deep hatred of insular, Catholic, perniciously self-deluding, bourgeois Spain, as well as his abhorrence of Franco, may be traced back to his childhood. Born in Barcelona in 1931, Goytisolo’s family were unapologetically bourgeois and his homophobic father supported Franco. At the age of seven, Goytisolo lost his mother in a Fascist air raid on Barcelona, a decisive moment he revisits in The Blind Rider. He has long been a rebel son: rebelling against his own father, against the father figure of Franco and ultimately against his fatherland, situating himself ideologically, politically and physically outside Spain. Yet while he hates Spanish society, Goytisolo has said he loves Spanish culture. His elder brother, Jose Augustin, became a poet, and his younger brother, Luis, a novelist.

Goytisolo’s most famous work is probably his trilogy of novels: Marks of Identity (1966), Count Julian (1970) and Juan the Landless (1975). The trilogy signalled a move away from the realism of his earlier novels, the first of which, The Young Assassins, had been published in 1954. His style became more experimental, ambitious and autobiographical. The novels of the trilogy were written from his self-imposed exile, primarily in Paris and Morocco, and form a withering critique of Nationalist, Catholic, bourgeois Spanish society, as well as a defiant celebration of Spain’s Moorish legacy, a hugely important theme in his work. Quite significantly, this change in Goytisolo’s writing came about in the same period as his acceptance of his own sexuality. Although a lifelong partner of the French writer Monique Lange, it was during the 1960’s in Paris that Goytisolo began to explore and to come to terms with his attraction for men, specifically for Arab men. He has often used homosexuality as a means with which to challenge and confront all he hates about Spain and has cited Jean Genet, with whom he and Lange were friends, as a moral and literary mentor.

It was with Marks of Identity that he began his quest for authenticity in his writing, a search for and engagement with an authentic self, an authentic history, an authentic Spain. It is a quest that has been evident in all his work since, from his 1980’s two volume autobiography: Forbidden Territory and Realm of Strife, to his last novel, A Cock-eyed Comedy (2000), a satire on the Catholic church and its secret Opus Dei organisation. In The Garden of Secrets (1997) he revisits the Spanish Civil War, one of the great fault lines in his conception of Spanish history. Twenty-eight storytellers meet in a Moroccan garden and each tells a different tale about the fictional poet, Eusebio, a friend of Garcia Lorca’s who escaped to North Africa after having been imprisoned by the Nationalists. There is a story for each letter in the Arabic alphabet and what ultimately emerges from the tales is the ambiguous, multi-faceted nature of truth, identity, literature, memory and history, as well as the hypocrisies, lies and vulgarity of Nationalist Spain.

Like much of Goytisolo’s work, The Blind Rider requires multiple readings, and even then it is not always easy to extract clear meanings from it. The book is split into five sections and rather than following a conventional plot, it is instead something of a series of meditations on themes that include mortality, memory, childhood and God.

More than anything else though, The Blind Rider is a book about grief. It is a grief that is very real to Goytisolo, having lost his beloved wife when she died in her sleep in 1996. From Morocco, where Goytisolo moved full time after his wife’s death, the central character of The Blind Rider (to all intents and purposes Goytisolo, even though he’s written in the third person) begins to deal with the loss of his wife. This is particularly true of the first section of the book, in which the nameless man’s loss spells a brutal, paralysing pain, the pain of existing in her absence. As the narrator says ‘She had passed over to the other side and he felt—first incredulously, then painfully—the raw harshness of her absence… His inner universe had contracted, turned sour.’

His wife’s death forces him to confront his own mortality and he is tormented by the idea of leaving life without having found a possible meaning. At the same time, he is plunged into his past and the loss of his mother in childhood, ‘…the abrupt interruption in his emotional life had brought to the surface of consciousness the reality of his mother’s death hidden away half a century ago. To assuage the pain of the recent wound, he concluded, he should re-visit that older scar.’ And so he journeys back to his childhood, and tries to remember moments he had with his mother, but he can’t. They have been washed away, just as images of his wife will disappear from his memory in time.

From an old man sitting in his house, lamenting the deaths of his beloved women, and cursing time (the blind rider of the title that nobody can unsaddle), the narrative then moves out from his grief at the two deaths to other, inter-connected thoughts. In the second section, the old man recalls going back to the country home of his childhood when he was an adult and seeing everything changed, which in a stream of consciousness sets him thinking about his visit, years later, to Yasnaya Polyana, once Tolstoy’s home and now a museum dedicated to the writer. He contemplates Tolstoy’s great novel, War and Peace, and the profound effect of this and other writers’ work on him. As the narrator says ‘Literature allowed one to live by proxy. Tolstoy’s characters embodied his dreams of a more intense, varied life. It was then he discovered freedom only existed in books.’

In the third section of the book, the man ponders the incoherence and inconsistency of his own life as well as the impossibility of extracting the truth of his existence from the sum total of his writings, or his ‘awkward scribbles or sketches’. He is then beset by a series of nightmares in which children perish and he has a nightmare about his own childhood. At the same time though, it is the children who live with him who bring his only real moments of happiness, of respite.

God is the central figure in the penultimate section of the book. In it, the old man investigates a God that he doesn’t believe in, a cruel God created by man’s mythology, whose existence has been forged in man’s writings. It is this God who taunts him, saying ‘There are no big differences between you and me… We are chimera or spectres dreamed up by something other, call it chance, contingency or caprice.’ It is this God who seems to seduce him into dying and in the final section the old man is left to choose between dying or continuing to live.
Goytisolo’s work has been described as modernist, and like that of Proust, Woolf and Joyce, his writing is informed by a sustained subjectivity and lyrical, dazzling language that can swoop down and take the reader off the page and immerse him in the bigger questions with which the author is dealing.

In today’s world of clever ideas, smart, catchy prose and perfectly constructed, though often empty, novels, Goytisolo’s work can seem old-fashioned, but with all the bravery, integrity and philosophical investigation of ideas that word implies. The Blind Rider is a beautiful, wholly committed insight into a man’s experience of grief and an investigation into his own and mankind’s existence. In a book that is not much more than one hundred pages, the language employed is sparse, poetic and deeply moving. If this serious, despairing, tender and ultimately hopeful piece of work is really Goytisolo’s last novel, then he has left us with something special.

Denis Kehoe’s debut novel, Nights Beneath the Nation, was published in September 2008 by Serpent’s Tail. He lives in Dublin.