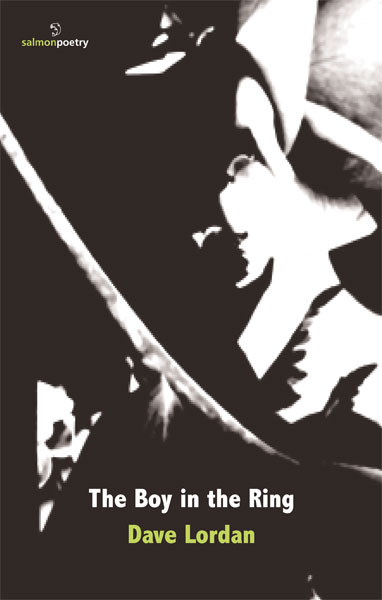 The Boy in the Ring

If the need arose to sum up Dave Lordan in a couple of words, I don’t think I’d be alone in classing him a ‘political poet’. When Lordan’s collection The Boy in the Ring won the Kavanagh award, Indymedia congratulated him as someone its readers would know as ‘an unabashed social activist’. He is a visible member of the SWP and the Irish Anti-War Movement, his best-known poem the long angry protest ‘Reflections on Shannon’.

So I suspected that this book would require me, yet again, to get all bewildered about the relationship between poetry and politics. I was surprised. The first part of this exhilarating collection is not protest or manifesto, but a controlled and powerful exploration of young male suicide. I suppose we all know by now that suicide is the most common cause of death for young Irish men today. This, then, is a significant, an important book. I thought of Brian Turner, the American poet who completed an MFA in creative writing before serving seven years with the armed forces in Iraq. The resulting work, Here, Bullet, recalled traditional poetic roles—the file who learns the tools of the trade before hitting the road. A review in the New York Times (quoted in H ere, Bullet’s blurb) read:

‘The day of the first moonwalk, my father’s college literature professor told his class, “Someday they’ll send a poet, and we’ll find out what it’s really like.” Turner has sent a dispatch from a place arguably more incomprehensible than the moon—the war in Iraq—and deserves our thanks…’

Like Turner, Lordan has been trained up—in his case with an MPhil from Trinity—before heading off to another kind of front. Lordan sends back a dispatch from a place unarguably more incomprehensible than the moon—the place where a young person considers death an attractive, or the only possible, next move.

What makes the first part of The Boy in the Ring powerful is that it is an exploration and not an argument. The poems about suicide come to a variety of conclusions, rather than starting from one. ‘At 14’ recalls Hartnett’s ‘Death of an Irishwoman’ in its catalogue of the useless things left behind by a life cut short. ‘Turkey’, in contrast, winds up at ‘[t]he sense it makes to take revenge like that / to go and lock the whole damn world out.’ ‘Mail for a dead guide’ speaks earnestly to a friend about what might have made him slip ‘into a knot / on the bark of an oak / disappearing out of their diminishing vision / completely’ whilst ‘Bad Luck Story’ is a comical whine. Funniest and hence most fearsome is ‘Fearless’:

The poems in this part—about growing up, being Irish, being male—are dark, farcical or frightening, and brilliantly interwoven, so that cumulatively it all does begin to make a kind of big sloppy jumper sense.

The personal is political, as punk taught us, and it may seem odd to draw a dividing line between that first and this second part. The book itself draws no line. But the difference is palpable. The second part deals with affairs more traditionally in the realm of public policy, and some of it is truly stirring. The problem is that it is less and less exploration; more and more argument. It tends closer to what one usually means by a ‘political poem’: manifesto, protest, propaganda. In his marvellously sarky ‘compendium of new poetic terminology’, Hunting the Snark, Robert Peters notes that ‘serious poets, suspicious of all verse that seeks a popular audience, have always denigrated political poems… manifesto poems of whatever persuasion are bad poetry. The lyrics are clichéd, the metrics unsubtle, and the thinking tabloid.’

‘Reflections on Shannon’, of which only an excerpt is included in this volume, is the clearest example of the leaning towards tabloid. Most cringeworthy is its presentation of slides portraying casualties of war, as immodest as those 80s ads in which starving children implored you with fly-ridden eyes to donate to some charity:

It is always tempting to bring international politics back to basics. War gets kids dead: war bad. It is nevertheless a cheap trick to exploit primitive emotions when purporting to write about complicated things. Poetry should be considered, thoughtful, humble; never cheap. These days, most respectable charities frown on the use of guilt as marketing ploy—its overuse is partly blamed for the public’s fatigue with and withdrawal from international politics today—and it may be time for modern war poets to wise up.

A poetry that is political need not seek a popular audience, and my uneasy feeling with the second half of Lordan’s book is partly that he is proclaiming. Charles Bernstein, in his Politics of Poetic Form, suggests that every interpersonal interaction can be read as a societal event. ‘[T]his microcosmic view of public space…shortcircuits those near-moronic voices who… moan about the loss of celebrity status or mass audience for the “serious” writer. This repeated misapprehension, both of the history of the reception of poetry… and of the meaning of “public”, is a clinically precise instance of a particular picture holding one captive, in Wittgenstein’s phrase, and so forcing the same conclusion again and again.’ Just as the conversation in the pub is a vital part of the democratic public discourse, so is the contemplative encounter between poet and reader. Simply by creating a discursive space that is an alternative to the binaries of pre-formulated politics—the yes/no of the polls, the either/or so depressingly obvious in an Irish election—doing poetry is a radical thing. Hartnett knew it: The act of poetry is a rebel act. Because he explores it with an open mind instead of orating from a predefined position—predefined, crucially, in the for/against world outside poetry—Lordan is more genuinely challenging when he writes about suicide than when he writes about Shannon.

Bernstein might argue that Lordan’s use of conventional forms smothers his poetry’s rebellion anyway. ‘…[C]onvention can neutralise substantive conflicts: Tweedledum & Tweedledee may say opposite things but this becomes a technicality within the context of their identical form.’ This, Bernstein argues, is the logic of the conventional form: the ‘axiomatizing of difference’. The lyric beloved of Irish poets—which Lordan, for all his fun with colloquial speech, inclines towards— parallels myth in its tendency to tie up ends, suggest completeness. Roland Barthes compared myth to an ideal servant whose discreet preparation of wardrobe and table renders invisible all trace of the work involved: in it ‘history evaporates… all that is left for one to do is to enjoy this beautiful object without wondering where it came from.’ So, too, with the well-made poem.

But how perverse to laud the man for learning the craft and taking it to a place that needs poets, only to gripe when he returns with well-crafted poems! I haven’t entirely worked out the relationship between politics and poetry. I don’t believe any poet has the hang of it entirely. But The Boy in the Ring is a rousing addition to the discussion. Ultimately, with poetry as with political engagement, the thing is to get doing it. Lawrence Ferlinghetti’s ‘Populist Manifesto’ chides poets for hiding in closets, probably fine-tuning their sestinas and villanelles, while the world falls down around them. There’s no time, he warns, for any artist ‘to hide / above, beyond, behind the scenes, / indifferent, paring his fingernails, / refining himself out of existence.’ Lordan has no intention of it.

the seagull smashes against the glass